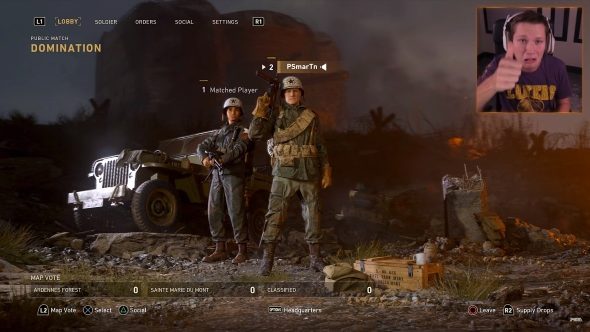 It’s not unusual for major publishers to turn to influential YouTube figures to promote their big-budget triple-A titles, but it’s hard not to look a little skeptically at Activision’s choice to have Trevor ‘TmarTn’ Martin act as one of the key public faces for the game.

For those who don’t remember, TmarTn was caught deceptively using his YouTube channel to promote – without disclosure – a Counter-Strike: Global Offensive gambling site which he was co-owner of, where people could pour huge amounts of money in the hopes of winning rare equipment skins.

Don’t let sketchy YouTubers put you off Counter-Strike. Check out our news on the latest from the venerable FPS.

While TmarTn and his business partners somehow escaped a fine or charges (a class-action lawsuit was dismissed), they did have to sign an agreement with the FTC that they would never repeat the stunt, and also“clearly and conspicuously” disclose any business ties they had with anything they promoted in future.

Even if he himself escaped punishment, the shockwaves from this event are still being felt, with Valve cracking down hard on CS:GO gambling sites not long after the issue came to light, and many shutting down of their own volition.

While his disclosure on his Call of Duty: WW2 coverage is a little more overt (here’s him on Twitter bragging about his developer-signed promotional helmet), and his primary involvement appears to be streaming for the charity fundraising Race To Prestige event, he does seem a particualrly questionable choice considering his recent close call with the law.

It would seem that even when the best-known and most clearly defining moment of your career is being caught out by the authorities for trying to trick kids into using your gambling site, Activision will still want your coverage, so long as you’ve got a few million YouTube subscribers.