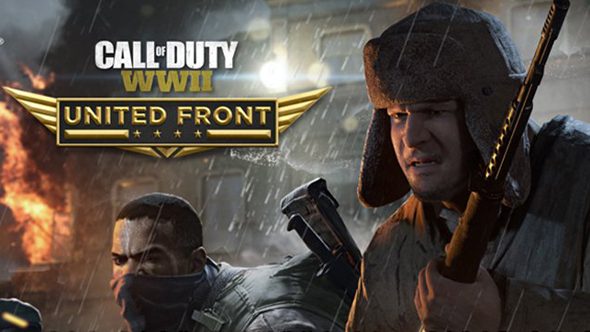 Call of Duty: WWII’s third DLC pack is called United Front, and it’s out very soon. None of this has actually been announced just yet, but the leaks are so prolific now that they’ve pretty much taken the place of an official announcement. United Front is set to launch June 26 on PlayStation 4, and will come to PC after the usual month-long exclusivity window runs out.

PlayStation trophies for the DLC went live ahead of schedule this week, revealing a handful of features for the new zombies campaign, The Tortured Path. They also unveil the titles of some stages, like Beneath the Ice, Across the Depths, and Into the Storm – all of which seem to offer pretty clear hints at setting.

Call of Duty has returned to the ’40s, but don’t miss all the best WW2 games on PC.

An ad for United Front has also surfaced via rewards broker O2 – and in case that’s taken down, you can see an archive via Charlie Intel. It details the release date, and the “dramatic drive toward Berlin” showcased in the three main multiplayer maps: Market Garden, Monte Cassino, and Stalingrad.

There’s also a new War mission set in North Africa called Operation Supercharge, as well as the aforementioned zombies campaign, The Tortured Path. With the expansion apparently set to debut within a week, we should hear something more concrete soon, hopefully with a trailer showing the new maps in action.

With the Call of Duty: Black Ops 4 release date encroaching, we’re passing the halfway point on WWII DLC. The last bit was War Machine, and there’s set to be one more before the end of 2018 – likely the last step before Black Ops 4 takes over as the franchise’s current face.