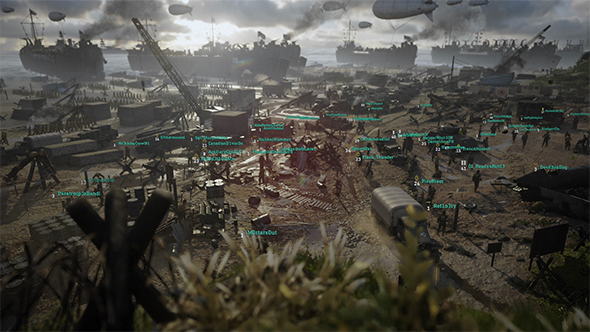 Like pretty much any major online game, Call of Duty: WWII’s launch didn’t go 100% smoothly. There were plenty of connection issues on day one, but Sledgehammer have rolled out some changes over the weekend aimed to ease the early server load. They’ve disabled a couple of tertiary features alongside these fixes, but one of them you probably won’t miss too much.

Find out how Call of Duty: WWII runs with our PC performance guide.

Headquarters mode, the game’s shared social lobby, is currently not public, meaning you won’t see fellow players opening their loot boxes for a little while longer. (But you can still invite your friends for a private loot party.) Leaderboard updates have also been temporarily disabled to help lower the server strain – but the information is still being tracked, so it’ll be accurate when the rankings return.

Sledgehammer also say they’ve “pushed a change enabling higher capacity load balancers, resulting in improved live connectivity,” and it seems all these changes together have largely fixed the connectivity issues players had been having across all platforms.

One of the more significant issues to come about as a result of the server problems has been lost progress, but Sledgehammer say that in most cases players had lost less than five levels, and the necessary fix was made Sunday morning. They do say they “are committed to making it up to the affected players,” but the specific form such a make-good might take is as yet unclear.

Perhaps all these server problems come from the game’s renewed success. After all, it did sell significantly more than Infinite Warfare did at launch.