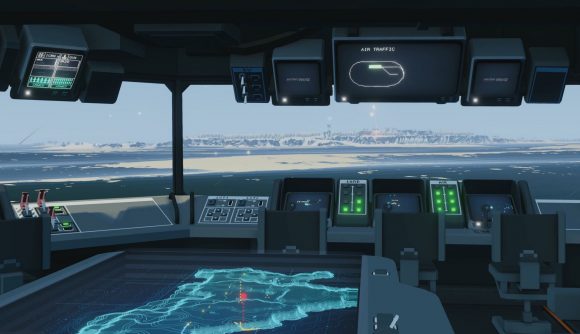 MicroProse has been light on actual game releases in 2020 since the brand’s big relaunch earlier in the year, but it’s not been shy about talking about all of the projects being worked on, many of them slated for 2021. The company’s latest round of ’80s strategy/sim necromancy comes in the form of classic RTS game Carrier Command. The publisher is now working on an official sequel – Carrier Command 2.

First published by Rainbird in 1988, the original Carrier Command featured a near-future setting where you were in command of a highly advanced carrier with robotic aircraft. It turns out an unknown enemy stole a slightly more advanced robotic aircraft carrier, and the two of you have to duke it out to try and colonise an archipelago of around 60-something islands. Because reasons?

Carrier Command 2 looks to bring that same energy back with a new remake that offers the same, er, curious plot and in-depth strategic RTS action. You’ll have a range of automated aircraft and amphibious units at your disposal, and you’ll need to duke it out against an AI (or another human) for control of another archipelago. There will also be co-op multiplayer as well.

Concepts such as gathering intel, maintaining supply lines, and also making sure you pair your units effectively for combined arms warfare will also be important. Carrier Command was never just about being an RTS though, and just like the original CC2 will let you hop into any vehicle and take direct control, across land, sea, and air units.

It’s worth pointing out that this isn’t the first time Carrier Command has been remade. Bohemia Interactive released Carrier Command: Gaea Mission in 2012, offering its own take on the classic title. This release had issues with pathfinding and AI, as well as lacklustre direct control elements. MicroProse will have to make sure it don’t suffer the same fate with this new attempt.

Carrier Command 2 is will apparently release on April 1, 2021, according to the Steam page, but we’re not sure how set in stone that is. ‘Q2’ 2021 was also mentioned in the press release, so your guess is as good as ours.