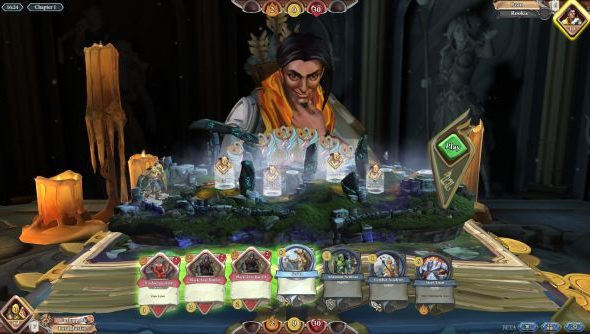 Jagex’s shot at the CCG crown is coming in just two weeks, the company has announced today. Chronicle: Runescape Legends is an odd mix of RPG and card game, having you adventure through enemies and obstacles before finally fighting your rival at the end of, you guessed it, the chronicle. It’s been running in beta for a little bit, but will launch on to Steam on May 26.

Want advice for the competition? Here’s the best Hearthstone decks for beginners.

As part of the launch celebration, anyone who logs into the open beta between now and Sunday, May 15, will get three free packs of cards. You can do that by signing up for an account on the official site.

As for the final game, it’s had a huge number of extra cards added since it was announced, based on Old School RuneScape, and they’ve got more to come. “We’ve already introduced brand new cards every week, increased rewards, balancing improvements, and there’s even more content planned for the months to come” says James Sweatman, lead designer. The first announced is an extra player character, Morvran the Slayer Master, coming in Summer.

Want to know more? Here’s what Phil thought on announcement, and a trailer for your perusal: