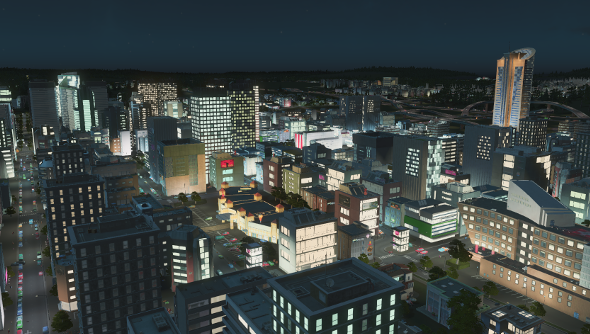 Update: There’s a release date now, to boot. You’ll be able to grab the After Dark expansion on September 24th.

When Paradox and Colossal Order announced Cities: Skylines – After Dark earlier this month, I was at first excited by the prospect of more of my current favourite city builder, but then a bit concerned that merely adding a day and night cycle and a few more services didn’t sound like a particularly meaty expansion.

Today, Colossal Order has given us a glimpse of what they’ve been working on in the first developer diary, and a lot of my concerns have been laid to rest.

Beyond the visual changes, which Colossal Order explains required them to create new textures for everything, there are some really big changes to how you can fine tune your city. You see, at night, the city changes. Less people work, people use different services, there’s more crime but less street congestion.

“The city simulation changes during the night to make sure the night time feels like a night should,” say the developers. “Citizens go out less and prefer to stay indoors. Only a few go to work, to simulate a night shift. The people who do go out, choose destinations that have to do with having fun and spending time with friends. When there are not as many private vehicles on the roads as during the day, service vehicles can move more freely. The separate night time budget allows you to adjust how active services are during the night and day. To get the most out of the quiet night time, you can set garbage trucks to operate mostly during the night, or have hearses pick up bodies at an increased rate.”

That part about making garbage trucks and hearses work at night when the roads are quiet sounds especially wonderful, given that many of my cities are full of corpses and rubbish. So it looks like the sun going down will have a significant transformative effect on a city, and Colossal Order have been giving some serious thought to how a city functions in the evening hours.

Consider me back on board.