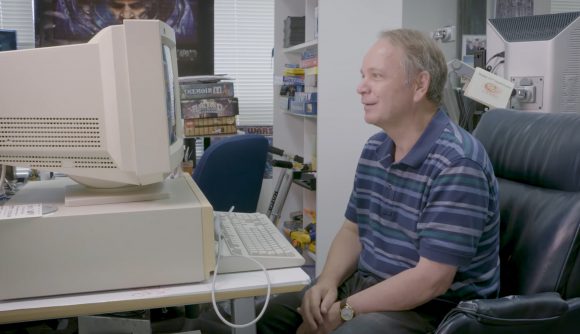 Sid Meier’s Civilization has been around for the better part of three decades, and the series’ evolution has been a solid metric for just how far games and the tech that powers them have come in a relatively short amount of time. (After all, the original Civ can run in Excel now.) The developers have just about as much nostalgia for the original as you do, and they’ve kept an original development PC running for over a year just to be able to look back at some original prototypes.

“When the 25th anniversary of Civilization rolled around,” Meier says, “I realised we had in our basement some of the original computers that were used to create the game. I thought it’d be fun to try to resurrect those. There were actually two of these Compaq Deskpro 386 computers that I saved for all those years. We brought them in here, and tried to fire them up.”

It turns out that it’s pretty dangerous to, er, “fire up” dirty old PCs, as Meier says “one of them actually exploded when we plugged it in,” thanks to a collection of dust in the power supply. The second PC was in slightly better condition, but battery issues mean that they could only get one successful boot out of it – so it’s been powered up for “over a year” in fear that it’ll never boot up again.

“This is the computer that the majority of Civ development done on,” Meier says before firing up an old prototype.

You can watch that early version for yourself in the Ars Technica documentary above. The whole thing’s worth your time, but the classic PC fun starts at the 10:04 mark.

We’re at the point now where even Civ 6 has battle royale, but the core of that ‘one more turn’-inducing strategy experience has remained even after all this time – straight out of that little 386 machine.