In Beyond Earth, Civilization has been unshackled, floating away from Earth, breaking free of its orbit and starting fresh on an alien world. This is Civilization, but in space: not Alpha Centauri 2, and without the iconic civilisations and leaders that usually makes Civ tick. It’s a good game, and one that will still see you, as it did me, binging until 3am, and the sinister alchemy of One More Turn syndrome lives on. But it’s nowhere near perfect, and strangely bland.

Sid Meier’s most famous quote is what drives Civ. It is a series of interesting decisions. You face big choices, to guide an entire people through history. Beyond Earth has more decisions than you can fit inside a colony ship, more than any Civ game yet. But they’re rarely interesting.

Sid Meier’s most famous quote is what drives Civ. It is a series of interesting decisions. You face big choices, to guide an entire people through history. Beyond Earth has more decisions than you can fit inside a colony ship, more than any Civ game yet. But they’re rarely interesting.

Yes, you will develop new technologies. Yes you will improve the hex tiles that cover your new world. You will negotiate and revoke treaties with your neighbours. You will go to war, you will make peace and eventually you will win, maybe by conquering the world through force, or by bringing the rest of humanity to your new home.

But so many of these decisions in between are dull, amounting to little more than choosing between small numbers and percentages. And nowhere is this more heartbreaking than in the initial design of your faction.

Factions don’t work in the same way as your nation in other Civ games. They’re more crafted: you have more options to consider. You need to pick a sponsor; dictating the what the faction is called and who the leader is, sporadic flavour text, and a range of unique bonuses to things like health, which is Beyond Earth’s version of happiness, and productivity. You get to choose what type of colonists have been brought to your strange new world (Aristocrats bring in more money, engineers are more productive), and what kind supplies are kept in the storage holds (weapons net you a free soldier, lab equipment boosts research).

I have a problem with this system though: it creates less relatable opponents. It was always going to be harder for Firaxis to create inspiring futuristic factions than those based on historic civilisations. Beyond Earth’s factions are practically blank canvases, just names and vague collections of ethnic groups. There’s the Pan-Asian Cooperative, which is Asian and has purple borders. Their leader is this lady whose name I forget, but I played as her for 500 turns and it took me 400 to find out that one thing about her. Then there are those other guys, ARC, Americans I guess, and they like the economist Adam Smith. Other factions also exist. 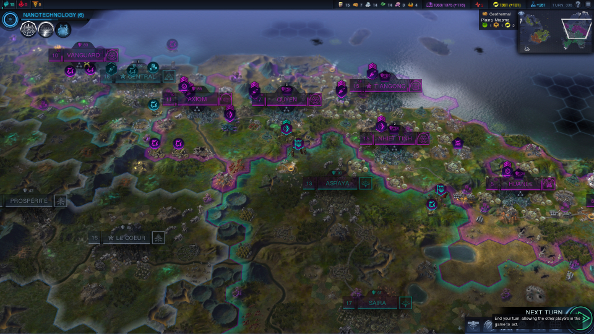 But beyond the history, Civ’s leaders had more going for them, had a personality. There’s nobody like Montezuma, being a dick, throwing their weight around.

They can still grow, though, and shoot off in different directions. The most basic step is by choosing what buildings do. There’s more fiddling. Now, when a construction project is finished, it often ends with a question. Should the food being produced by your new algae farm go towards feeding the troops or feeding everyone? Do you want your new autoplant to produce more stuff or more money? 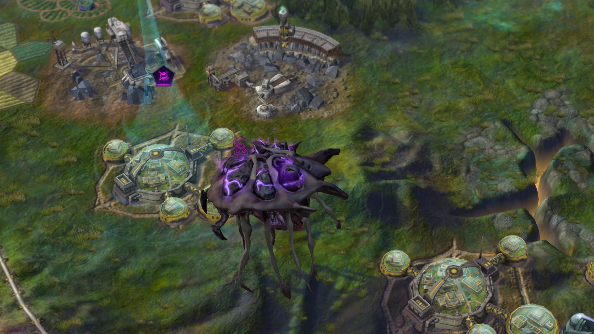 Thankfully, these choices feel more meaningful, thanks to a bit of flavour text that explains why this bonus is being doled out. But it’s still just a slight increase in one number over another. There’s no serious risk in choosing one over the other, and no effort has been made to achieve the bonus – it’s given out automatically.

There’s an attempt at modelling colonial development: factions can be levelled up, and bonuses applied. There are aggressive options (conquer an outpost and you can immediately build a new one in its place) or trade options (more trade routes) or just simple experience bonuses. Unlike Civ V, you’re encouraged to explore different trees; with bonuses applied when you unlock traits in three tiers.

And, there’s politics: or at least beliefs. Affinities are the personality of your faction. Purity factions think Earth is rad, and want to turn this new, alien world into another one. The Supremacists are all about improvement, augmenting their bodies with technology in an attempt to dominate their new world. And factions that follow Harmony are xeno-loving hippies, hoping to live as one with the planet. Each paths comes with unique, tougher units and new buildings. 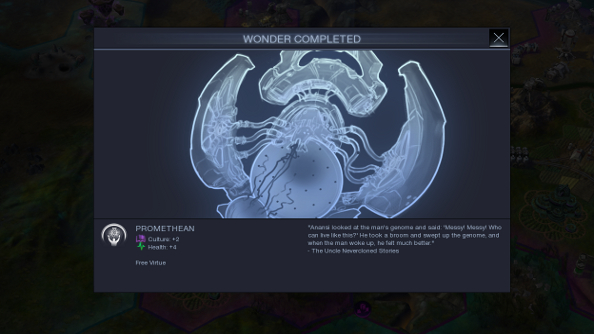 Affinity is Beyond Earth’s great leap forward: it feels like it properly belongs. The concept expands on the ideologies of Brave New World, andit gives a faction a sense of place and purpose, one that fits into this new world. It represents humanity’s struggle with identity now that it’s so far from home. There’s an awkwardness that permeates throughout the Beyond Earth, I feel like it struggles to understand its own concept, how to bring Civ into space, but affinity gets it close.

Beyond Earth’s research system does too. It’s a web, rather than a tree, and at first, you’ll struggle to make sense of it. It’s a confusing mess off bars and lines with vaguely futuristic jargon and tiny descriptions. But over time, I came to appreciate it. The web structure does away with so many pre-requisites. In previous Civs, if you wanted electronics, you’d definitely need to invent steam power at some point in the past. In Beyond Earth, you can jump right into researching death rays.

Researching a branch also unlocks its leaves – slightly more specialised techs, offering things like bad ass battlesuits for soldiers or strange alien units. Science is great, then. It’s in the fighting, though, where it really misses the mark. 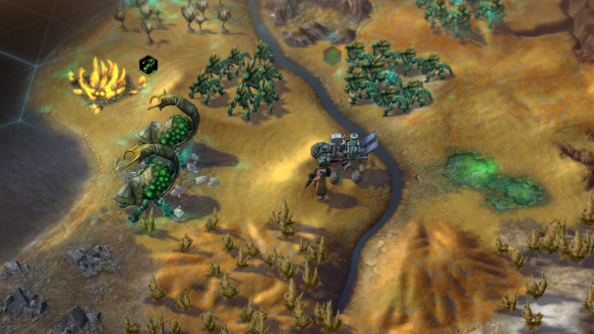 It’s a hostile, alien world out there. Poisonous miasma engulfs hexes, creating obstacles for movement and construction, and alien nests spew out anything from flying bug monsters to city-demolishing siege worms. There’s even a Kraken or three, looking suspiciously like islands until they eat your boat.

You can make an uneasy peace with aliens, unlike Civ’s barbarians. If you leave them alone, they tend to do the same. But if you start encroaching on their territory or mindlessly attacking them when all they were doing was cutting through your city boundaries because it’s a handy shortcut to the alien poetry recital they just bought tickets to, well…

Miasma doesn’t get pissed because it’s just gas. It looks like a giant fog of cartoon farts. It can be dealt with, though. There’s the aggressive option: blasting orbital miasma repulsors into the sky, pushing the noxious fumes back. Alternatively, immunity to its poisonous effects can be researched and, through affinities – they really are bloody handy – its healing properties can even be unlocked. While you might be cursing miasma at turn 10, come turn 200 you might be getting furious when another faction starts to remove it. You can even add miasma to hexes, annoying neighbours and helping your troops.

Unlike dealing with aliens, fighting human factions is just dull. 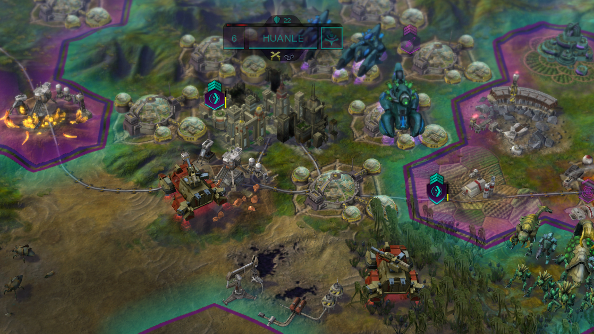 Civ’s AI has never been great. Serviceable, but you can usually ascribe funny motivations to Ghandi. AI opponents in Beyond Earth don’t have that luxury. They are blank AI slates that are embarrassingly terrible at war.

They’ll threaten and posture – sometimes not making much sense – one minute, then say lovely things and try to forge an alliance the next. Factions are inconsistent not just from game to game, but within individual games.

My first violent conflict that wasn’t against an alien set the tone. I’d been avoiding war because I was trying to get rich, and fielding a strong military is expensive. Also, I’m just nice. But there was no more room for expansion, and a switch was flicked in the robotic brain of my trading partner. She declared war. 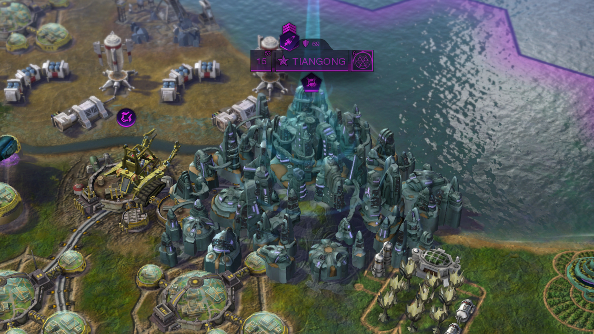 It was a surprise, and I was both unprepared and completely outgunned. One of my cities fell two turns later, and I found myself wasting all my space-cash on instant purchases of troops – which is exceptionally expensive. I needn’t have bothered. The surprise attack was a fluke, and she found herself unable to make any more headway. Despite having more troops, which were also more powerful than my own, veterans of earlier campaigns, the war was over 10 turns later, with me as the victor.

Why? Because the AI makes poor use of terrain, is struggles when attacking and defending at the same time, and concedes very easily. I walked out of the war with lots of lovely money and even a new city, which was offered to me at the negotiating table. It was like bullying a robot.

It’s a shame, because war could be quite fun. There aren’t many units to keep track off, but your troops are diverse, and each unit has a meaningful role and lots of upgrade paths. Also, future-men riding alien lizard horses and orbital space lasers. Oh yes. 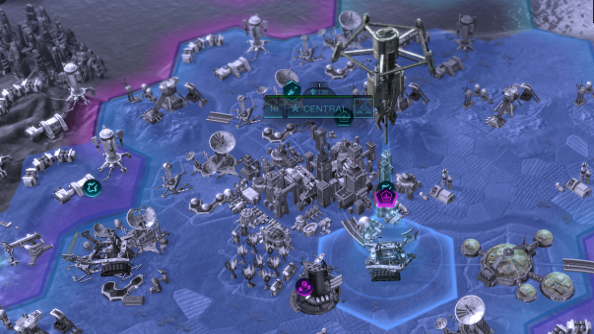 But I found that sneakiness was better than putting up with a war. I’d send in spies to siphon energy, use my wealth to buy orbital lasers, summon my own personal siege worm and then just go to town. There are, at least, a few ways to be a conquering arsehole.

The road to victory, unlike war, has some flavour. Victory conditions, aside from conquest victories, are now achieved through questlines. You’ll need to research techs, construct buildings and craft your Civ’s affinity in a specific way: they require planning and time, but I never really felt like going back into the game to achieve specific victory conditions. The stories they tell, though more interesting than the absence of a narrative or context elsewhere, are not exactly compelling.

That’s the thing about Beyond Earth: I feel like for every considered, clever addition to Civ’s formula, there’s always a near miss. War is fun, but the AI is not. Aliens are novel, but humans are dreary. I enjoyed playing it, I’m still playing, but it just hasn’t gripped me like previous games. I want it to be better, more interesting, than it is.