The Civilization series has never handled difficulty well. I don’t mean it’s too hard, and I’m not here on braggart duty to claim it’s too easy. It’s an  issue extends to both ends of the difficulty slider. For a game with matches that last anywhere from three to 30 hours, it’s always either too easy, or too difficult. The former renders most of the game’s features useless, while the latter, rather than actually making the AI smarter, unfairly buffs your opponents to ensure you’re always playing catch-up. Civ VI should suffer from the exact same problem of having no middle ground, but a couple of changes to other systems have made both ends of the difficulty spectrum that bit more engaging and – crucially – fair.

In previous Civilization games, the switch to easy mode (or ‘Chieftan’) means abandoning some of the game’s core features. Diplomacy becomes redundant, culture and science are suddenly a grind and religion is reduced to a fun distraction. The only thing left to do is wage war, which gets pretty tedious when you’re unlocking new units every five turns. Wiping out a group of Knights with a Great War Bomber is only fun the first time you do it. Nuclear war in the 1800s is equally tedious.

From Chieftain up to Prince, almost nothing interesting happens in the entire game. From turn one to the space age, the other civs just don’t play. Occasionally they squabble amongst themselves, or they denounce you for bullying a city-state or trying to launch a coup, which you only did because you couldn’t figure out what else to do with your surplus of spies. For the most part though, they’ll leave you alone, bowing to your every wish should you take out a couple of their units or land a blow on a city. 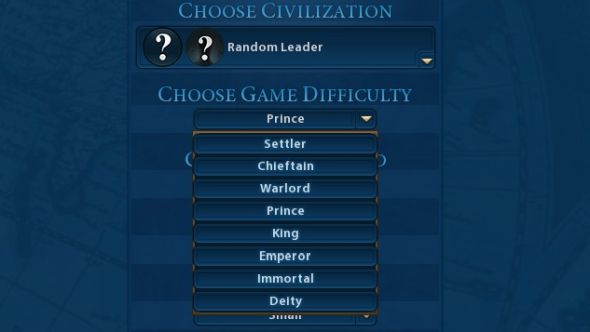 And the problem extends far beyond achieving a domination victory or interacting with your AI opponents. Make appropriate use of the resources around you and you’ll soar through the technology tree, only slowing down when the game tasks you with building a spaceship and travelling all the way to Alpha Centauri. The ridiculous pools of wealth you’ll have accidentally accumulated by this stage can all be poured into research agreements with friendly AI, making your job even easier. On faster game speeds it’s possible to skip entire historical eras, with trebuchet and artillery units cropping up alongside one another, and at least one group of ancient Warriors still wandering around, gawping at the tanks and fighter planes whizzing past them.

The specific problem with Civs past though, is that playing it on Prince or lower is pretty much the only way to play it at all thanks to a difficulty scaler that massively disadvantages the player, while buffing the AI. Instead of your adversaries getting smarter, they just get bonuses.

At its peak B.S. – the Deity setting – that means crippling the player in the early game: unhappy cities, huge cost increases for building anything and almost no production-free units. On top of that, the AI civs get five free techs, two workers and defensive units, reduced unhappiness in all cities and, should you give them a reason, a lovely 100% chance of declaring war on the tiny, miserable collection of mud huts you’ll be calling a capital city for the first 100 turns.

The result is that in the highest difficulty settings you’re playing against a group of massively buffed, belligerent civs – and that just feels cheap. Instead of the competition doggedly seeking out a diplomatic or cultural victory, they use their many advantages to make establishing your empire as difficult as possible; a problem that’s amplified by the AI being designed to target weaker civs. And because it’s impossible to prepare yourself for the randomly generated maps and enemies, it’s a difficulty spike that few (myself included) ever overcome.

Enter Civ VI, and almost nothing has changed with regards to how the higher difficulty settings work. Face your computer opponents under the exact same circumstances and their units will be stronger than yours. Their tiles will yield more resources than you – to the extent where an AI Warrior is more powerful than your own ancient unique unit. Free techs and production boosts mean that you’re always playing catch up. This is especially frustrating when you see the enemy AI make so many inefficient missteps like wasting useful moves while under siege or blockading their own troops from attacking.

Much like in Civ V, the only way to win on higher difficulties is to channel everything into creating an efficient empire, and any empire that can overcome such enormous deficits will eventually overtake and eclipse the competition. 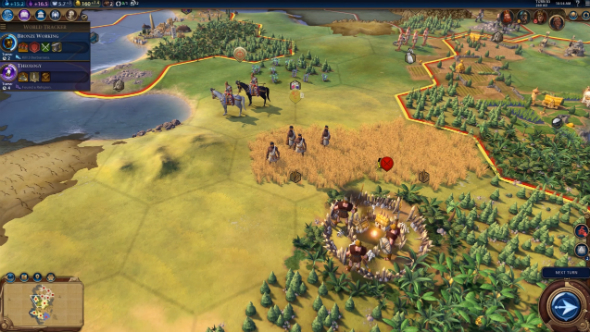 So the same issue remains.

Except not quite. A couple of additions make all the difference both to high and low difficulty settings. For starters, Barbarians are now interminable scourges, doggedly scouting and raiding your empire until well into the Medieval era. Fail to keep an eye on a trade route and it will almost certainly be pillaged; automate your Scouts and they can get killed in a single turn. If a Barbarian Scout discovers one of your cities, you’ll have to fend off raids until you destroy the threat at its source. Barbarians keep you on your toes on Prince, and can even help you bring down the competition on King or Emperor.

It rewards players who actively explore the map from turn one, while punishing absentee emperors severely. Unlike in Civ V, the AI in Civ VI actually pays attention to the Barbarian threat, meaning you won’t have to do all the hard work. Likewise, if you spot a city-state or outlying city struggling to repel a nearby camp of Barbarians you’d be wise to attack it yourself for an easy conquest.

Diplomacy has also been overhauled, which makes avoiding warfare with tougher civs much easier. The Gossip system makes it possible to unearth what every Civ is up to, both publicly and behind the scenes – if you want to know who’s building armies and who’s constructing wonders you’ll have to pay your diplomatic dues. The difference is that in Civ VI you actually stand a chance against sudden shifts in relationships and impending war, because you can learn about it long before it happens. 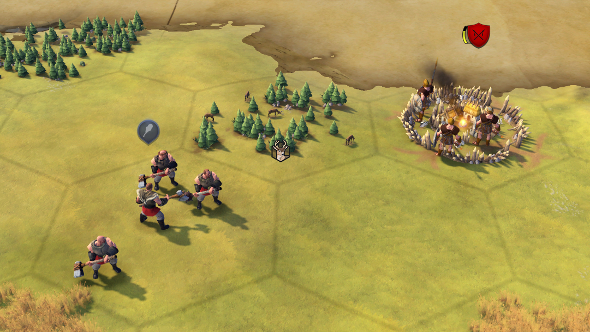 Agendas make the personality of each leader transparent: if you don’t want to piss Montezuma off, you’d best try and give him access to any luxury resources you have. Watch a game play out on a large map on higher difficulties and it’s not uncommon for three or four unmet civs to get wiped out by turn 100. The diplomatic landscape is that bit more convoluted this time around, and that makes playing on even the easiest difficulty drastically less tedious. Conversely on harder difficulties, the additional systems often result in civs destroying each other, letting you get on with overcoming the tech and production deficits. Provided, of course, that you don’t get on anyone’s bad side.

With Civ VI, Firaxis Games have decided to add rather than fix. Easy modes are still too easy, and hard modes are still, broadly, too hard. Importantly: neither feel fair. But by throwing additional systems into the mix like dastardly Barbarians and agendas, there’s more room for chaos and unpredictability than ever before, which as it happens, does a pretty good job of levelling the playing field across all difficulties.

Let us know what you think of Civ VI’s difficulty settings in the comments below… even if you think I’m totally wrong.