The Civilization series has never reached Paradox-levels of DLC’s, but there’s now enough Civ 6 DLC, that you may need a bit of help evaluating all of the variety and options. We’re now at half a dozen scenario packs, two major expansions and the New Frontier Pass is currently running with six smaller DLCs releasing between May 2020 and May 2021.

Time will ultimately tell if we get anything beyond that or even another ‘big’ expansion, but in the meantime here’s everything you need to know about Civ 6’s current DLC library, including all of the smaller DLC that add many new civs and standalone scenarios. This is similar to what happened with the Civ 5 DLC run back when that was still a thing.

We’ve broken everything down for you below, but it’s worth noting that at the time of writing, most of the initial civilisation/scenario packs that were released prior to the Rise and Fall aren’t actually available to purchase separately any more. You can typically pick them up together by buying either the Civilization & Scenario Pack bundle or the Platinum edition. The ‘New Frontier’ pass packs though are being sold individually.

Here is a list of the best Civ 6 DLC: 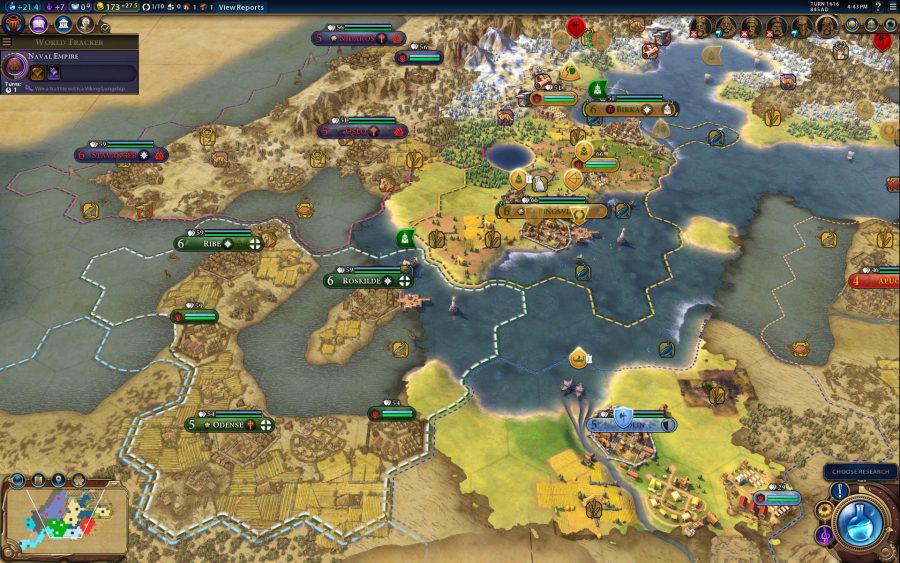 This is the only piece of DLC so far that doesn’t include a new civilization, but it also contains one of the best scenarios. At five bucks, I think you’ll get your money’s worth even if you only play through it once. The map is huge, there are many paths to victory, and each of the three viking kings you can play as offer the potential for a different experience.

The new city-states are nice if you happen to run into them when you’re pursuing a certain victory type. Monasteries from Armagh are one of the most powerful improvements in Civ 6 if you’re aiming for a religious victory. 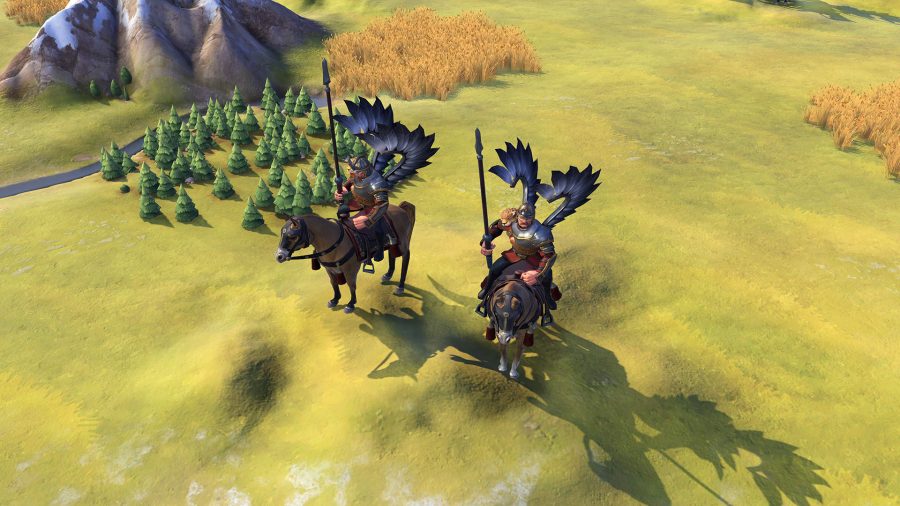 How big of a fan of Winged Hussars are you? Poland can be a very strong religious civ – but the main feature that makes them interesting is their signature cavalry unit, which can be used to slip behind enemy lines and create extremely devastating hammer and anvil charges. Outside of that, they’re fairly vanilla. The Jadwiga’s Legacy scenario is essentially a horde mode in which you’ll be defending your capital and some allied city-states from wave after wave of barbarians.

I didn’t have a very good experience with it my first time through because it’s never explained to you that the only activities worth your time are cranking out fortifications and military units. When the Golden Horde wiped out both of my expansion cities and all their cultural and science buildings, I wondered why I even had the option to build them in the first place. It’s an interesting way to use Civ 6’s mechanics to create an entirely different type of game, but the lack of clarity on what my objectives were was vexing, and overall it just doesn’t compare favourably to some of the more nuanced scenarios. 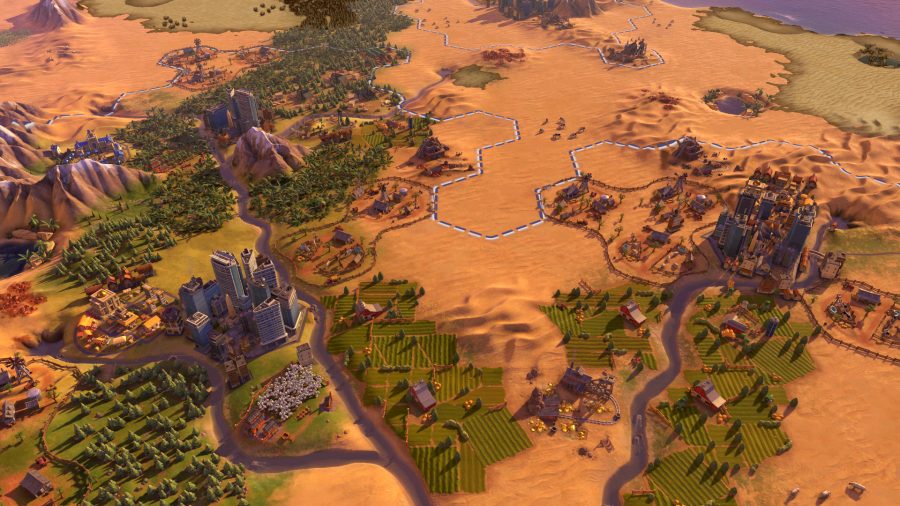 Australia is a very powerful civ with the ability to prosper even in the most abysmal, Mad Max-esque start positions. They have a luxury few other civs enjoy due to their production boost at the start of a defensive war, in that they can to some extent avoid building up a defense army until they absolutely need to.

The pack is probably worth grabbing just for that. Which is good, because the Outback Tycoon scenario is quite disappointing. I love it in concept. It reminds me quite a bit of the very good Scramble for Africa scenario in Civ 5, with the Australian interior being randomly generated to increase replayability. The problem is that it’s far too short. Just when I was really starting to enjoy developing my crown colony and removing the fog of war from the sprawling outback, the 10 Turns Remaining notification popped up and I was left really wishing there were an Epic or Marathon version available. With more time to play around, explore, and industrialize, it might have been one of the best scenarios of the bunch. As-is, it’s more of a letdown than anything else. 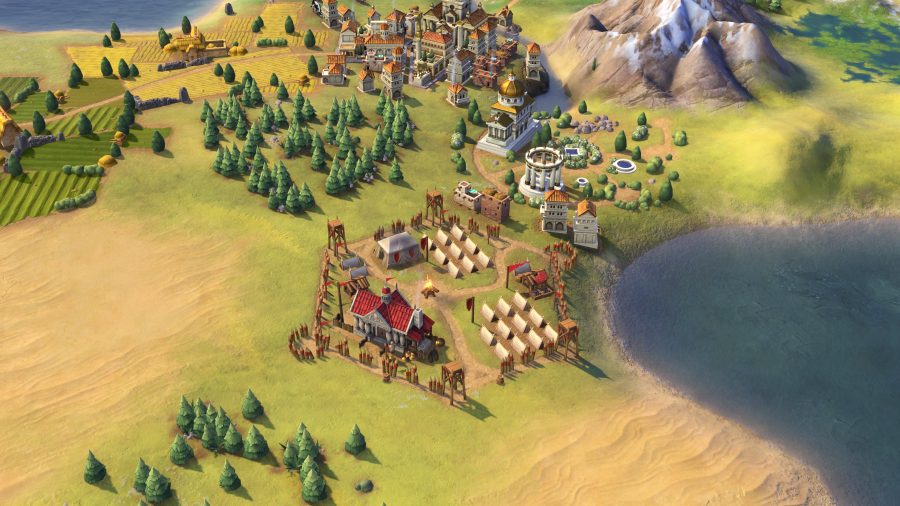 The duo of Macedon and Persia is probably the best value for your money in terms of new civs. Macedon can feel kind of one-note, as their bonuses are fairly wasted if you don’t go for all-out conquest early and often. But it’s incredibly satisfying to march across the map with Hypaspists and Hetairoi, led by a great general, obliterating any opposition short of gunpowder units. Persian Immortals are ideally suited for taking cities early on, and prevent you from having to build two different types of infantry as they also fulfill the role of archers. Their other bonuses also make them great at becoming an inward-looking, cultural or religious powerhouse using only domestic trade routes, limiting the risk of losing traders on long, dangerous international caravans.

The scenario fell a bit flat for me in its pacing. It’s a lot of fun early on, but the last few cities you have to conquer to win are so far-flung that it’s possible to realize you’ve screwed yourself with 20+ turns left to go simply because your units can’t get to where you need them before the clock runs out. I rarely faced any challenging combat decisions when the army actually arrived, but was defeated solely by logistical sluggishness – which doesn’t present the tense, rewarding gameplay intended. 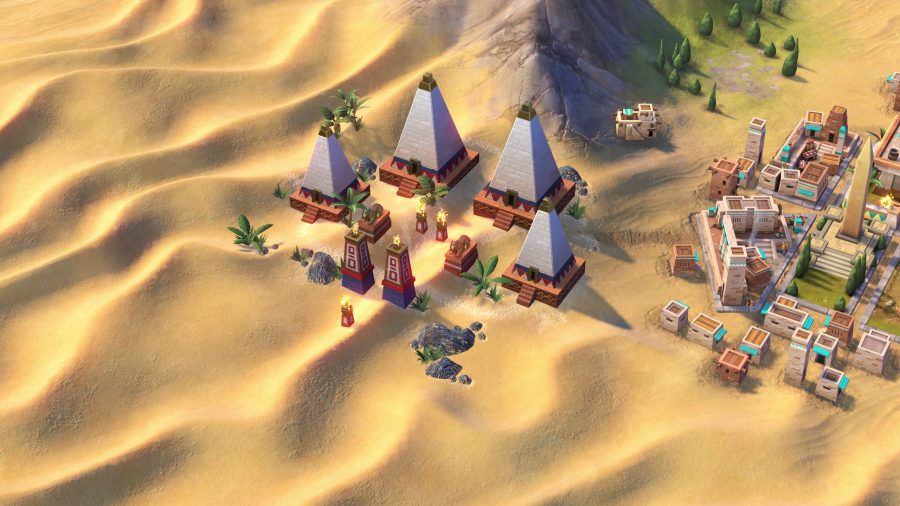 If you love archers, Nubia is probably going to be one of your favourite civs. They don’t quite make my shortlist, but the way Nubian pyramids streamline and supercharge your city planning definitely takes a lot of the guesswork out of making a new settlement healthy and productive.

Gifts of the Nile is absolutely worth it, though. I’d probably be willing to pay twice as much as the DLC currently costs just to access the scenario. Along with the Vikings scenario, it represents the pinnacle of scenario design currently available in Civ 6, and even compares favourably to some of the great ones from Civ 5. Exploring the Nile Valley, developing along its banks, and fighting off waves of invasions including Assyrians, Sea Peoples, Macedonians, and eventually even Romans gives a great sense of progression through the tumultuous history of the region and a huge variety of challenges to face.

Both Egypt and Nubia are playable, with the primary conflict being which of them will rise to dominance. There are tons of events for each which can grant you historical Great Generals and other benefits based on historical milestones. The one thing holding it back was a bug that made the religious victory impossible, as one of the buildings required for it never unlocked for me. On the bright side, that left me with the option of conquering everything – which probably ended up being more fun than building seven Temples to Amun would have been. I can see myself coming back to this meaty scenario many times, and I can hardly talk it up enough. It makes this DLC unmissable even if you never play Nubia in a normal game. 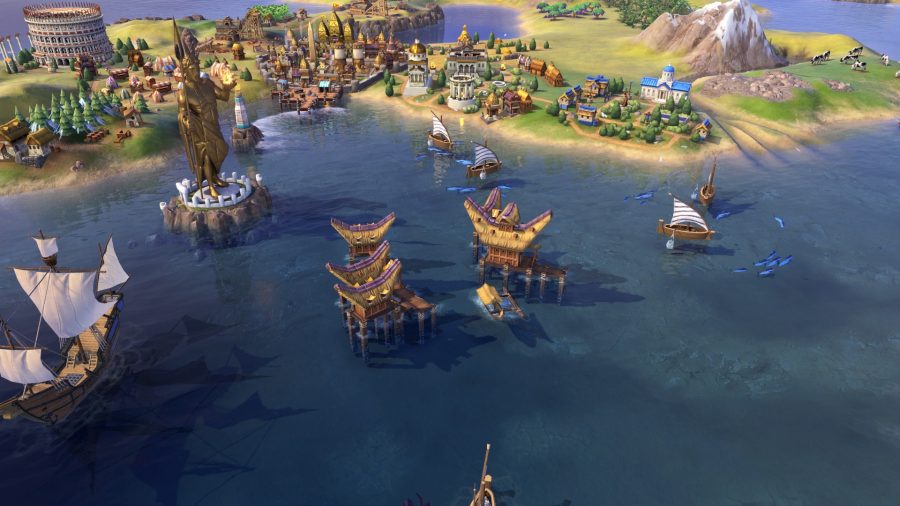 I’m not crazy about Khmer or Indonesia, mechanically. The Khmer bonuses from Aqueducts will definitely change up your normal city-planning routine, and the Domrey opens up a lot of options for early conquest. Meanwhile Indonesia can spread their religion the same way Vikings spread pillage and warfare, which can be rewarding on certain map types. They’re both decent – just not necessarily that special or exciting.

The scenario focuses almost entirely on theological combat, as you can’t build normal military or naval units. It’s an alright idea, but unfortunately didn’t wow me since I happen to think theological combat in Civ 6 is still not very good. 50 turns also makes it one of the shortest scenarios, and I tended to universally prefer the longer ones on this list as they felt much more like complete, historically-rich experiences. 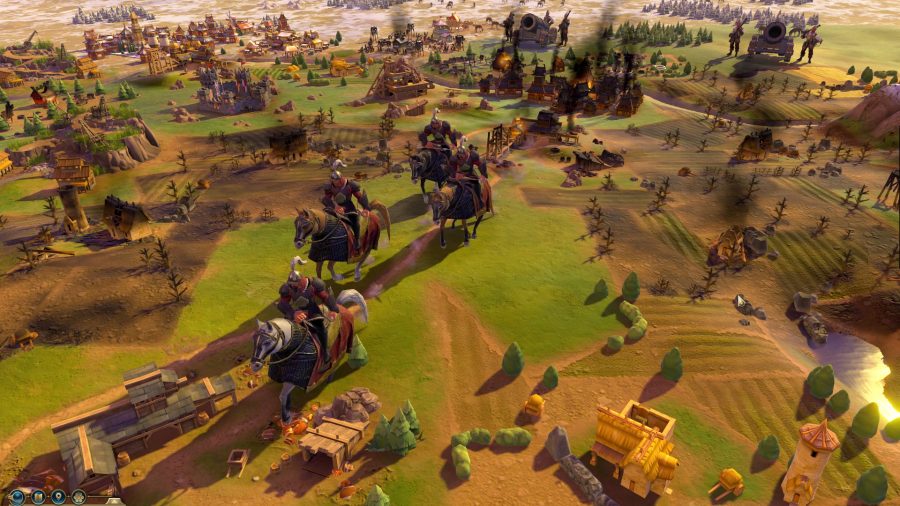 It’s not going to make you fall in love with Civ 6 if you were still on the fence, most likely. The Emergencies system is a bit underwhelming at the moment, and Great Ages aren’t as impactful as they should be. But Governors offer a great, new layer to city management with lots of strategic possibilities. And a number of the new civs have quickly become favorites of mine – particularly the Mapuche, Cree, Dutch, and Mongolians. You’ll definitely get your money’s worth just on new civs and leaders, comparing the price to some of the smaller DLC. Marcello wrote our official review for the expansion, and he had a few more concerns than I did but ultimately similar conclusions. 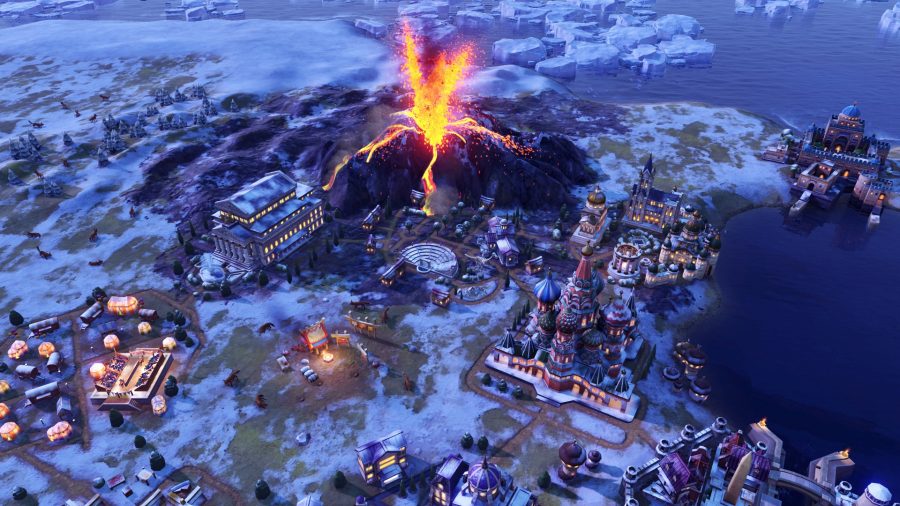 The new environmental effects certainly give you a lot of push back, and in general you have to start thinking a lot more long-term about how your civilization will develop and where you end up planting roots. The new civilisations are generally excellent additions, and the ability of Elanor of Aquitaine to be the leader for either France or England is an interesting experiment I hope we see continue.

On its own, Gathering Storm isn’t isn’t as ground-breaking as you’d perhaps suspect. As with Rise & Fall, just getting this DLC on its own is unlikely to make you fall in love with Civ 6 if you haven’t already. But the accumulative effect of both DLC means that the game at large is finally starting to realise its full potential. The price is a bit much for what it is given that you’re paying two-third of the full-price of the main game for not nearly two-thirds of a game’s worth of content, in our opinion. 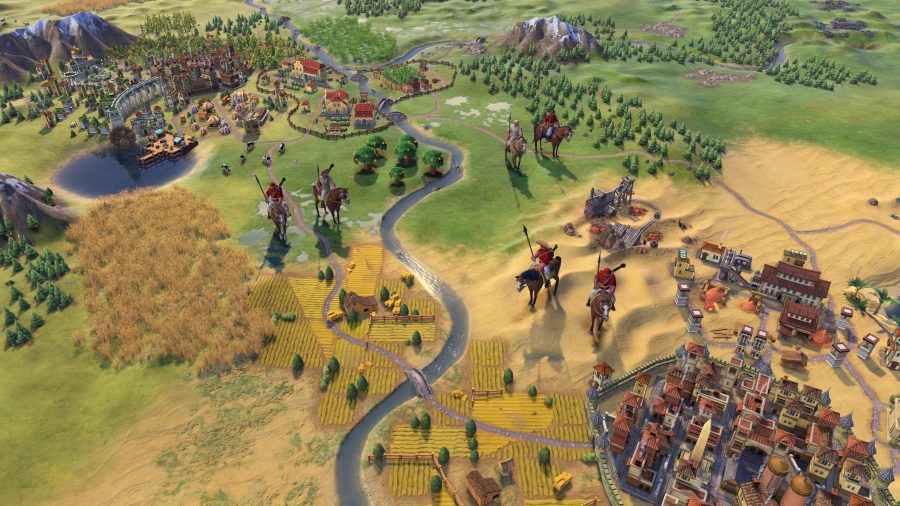 As announced in May 2020, the next phase of Civ 6’s DLC policy will involve a run of smaller packs. Subscribing to the whole run as a cost of £32.99/$39.99 will net you six packs, with one being released roughly every two months. The first one was released in May 2020. Each pack will contain at least one civilization and leader, as well as new game modes and other content, like Districts or Wonders.

We also understand that these packs will be available individually, so we’ll break down each pack as it is announced/released so you have as much information as possible. 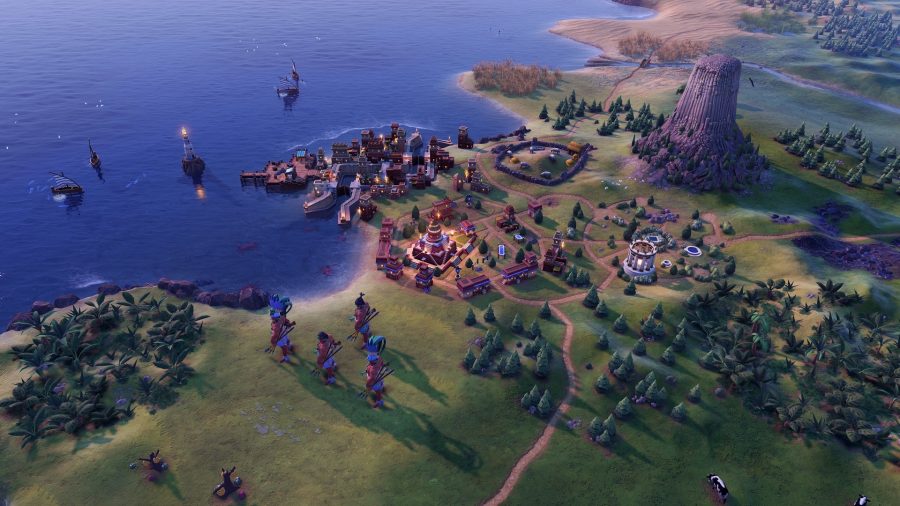 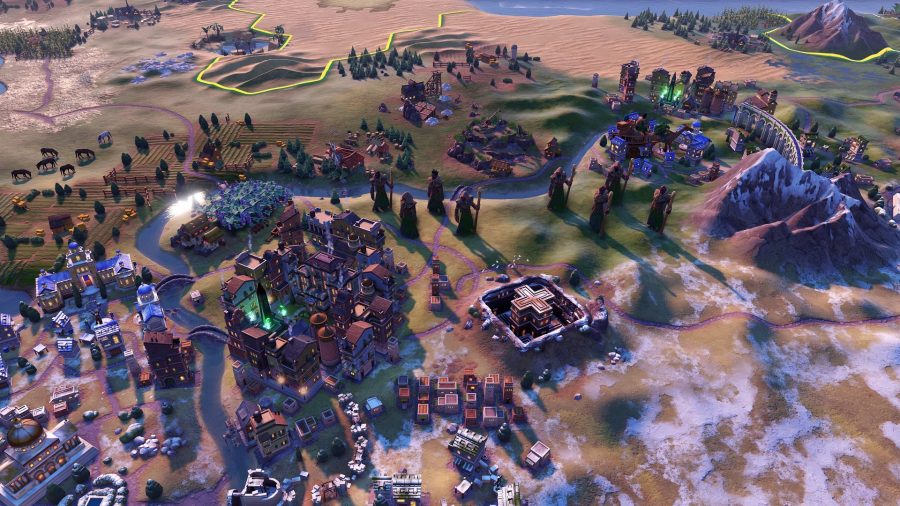 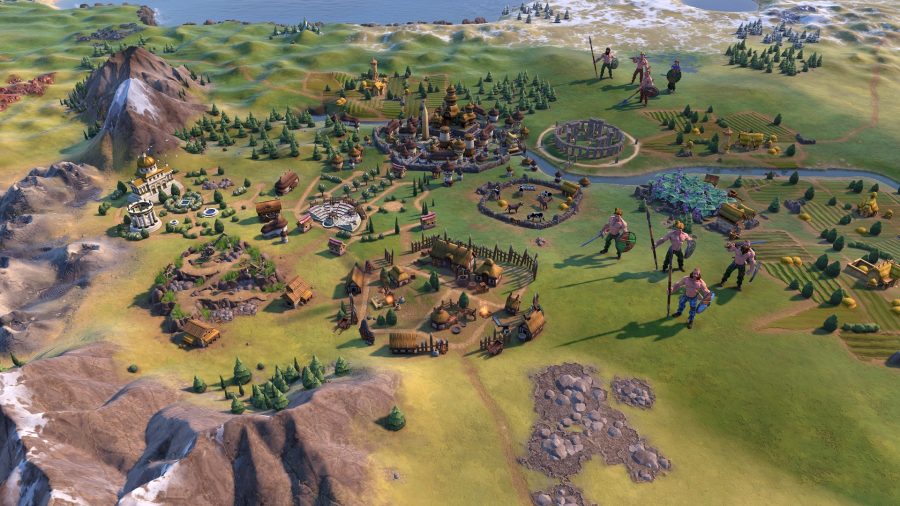 New Map Script: Highlands – Test your civilization against a map dominated by hills and mountain ranges.

This one adds a single new civilization but TWO new leaders, one new game mode, a new District, and two new Buildings.

The final pack will add another new civilization & leader, one new game mode, new World Wonders, and one new map.

Before you go: Civ 6 speed, maps and difficulty settings explained

We’ll update this guide with future DLC as it gets released so make sure you check back regularly.