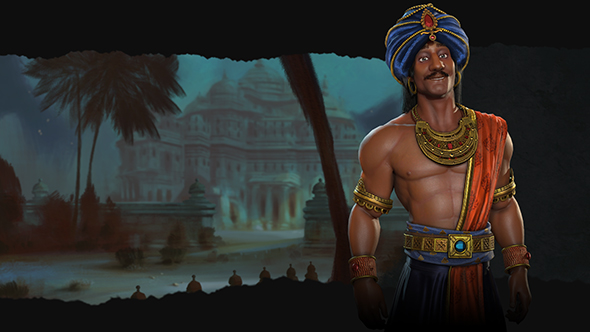 We’ve already had a look at many of the new civs coming to Civilization VI: Rise and Fall, with first looks at the incoming Mongolia, Netherlands, and Korea. But it’s not all about the new factions, as the expansion is also bringing at least one new leader to an old favorite. Chandragupta will be able to lead India to far more aggressive, expansionist victories.

You want only the finest in tactical gaming. These are the best strategy games on PC.

Chandragupta Maurya came to lead India in the third century BCE, reclaiming lands that had been lost to Alexander the Great before expanding his kingdom’s territory to even greater reaches. His reign came to an end when he gave up the throne in favor of an ascetic path to enlightenment.

Chandragupta’s unique leader ability is Arthashastra, which comes from a Sanskrit phrase referring to statecraft, economic policy, and military strategy. In-game, this will allow you to declare a War of Territorial Expansion, offering additional movement and combat strength in the conflict’s opening turns.

This will give India a more proper warlike option, so Ghandi won’t have to explore his darker tendencies quite so often. Chandragupta is only the second optional leader to make it into Civ 6, making India and Greece the only two civs with more than one leadership option.