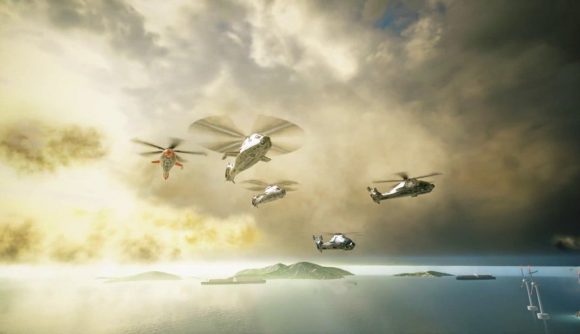 Around six months worth of work was all but scrapped by the team behind the upcoming Comanche when they found the simulation was a little too lifelike for its own good.

The new instalment in the Comanche series was revealed by THQ Nordic at Gamescom, and the developers took some time out with us to discuss where they are with the project, which is set for a 2020 release. As it turns out, progress was a mixed bag towards the start of the venture.

It was really important to get the flight model right so we wanted to lean more towards the simulation side when it comes to the controller and the feeling of when the helicopter moves,” game designer Hien Quy Tran tells us. “So we actually had an in-house pilot who was developing with us on the flight model.”
Quy Tran is sure to state that everything is iterative, and there was elements of what was binned that formed the foundations of their next build. Game development is complicated, especially when replicating piloting an attack helicopter like in Comanche.

“We had spent half a year or so on a very complex system, and this was when the pilot was saying ‘do it this way, do it that way’ and then said ‘this feels great, this feels real.’ And we were just sitting there, we couldn’t figure anything out,” Quy Tran says. “We were just crashing, thinking, ‘what the heck, even the developers can’t fly the thing?’ We had to redo it basically, or do something different, so we scrapped a lot of this.”

So, six months of work in bin? “Well not completely, you never really get completely rid of anything,” Quy Tran explains. “Half of the things you maybe redo, but you gain knowledge, it’s an iterative process. With every aspect in game development you always have these long term iterations.”

Despite the move to make the flight model more accessible, the devs also reassured us they know who their audience is. “If you’re into helicopter simulations or even Comanche, you will be able to fly within the first ten to 15 minutes, you’ll figure it out,” lead artist Hakan Bilenler explains. “You’re probably not gonna pilot the really really tight spaces like the tunnels or stuff like that, but you’ll get the feeling.”

The new Comanche, the first in 18 years, will be ready for action sometime in 2020.