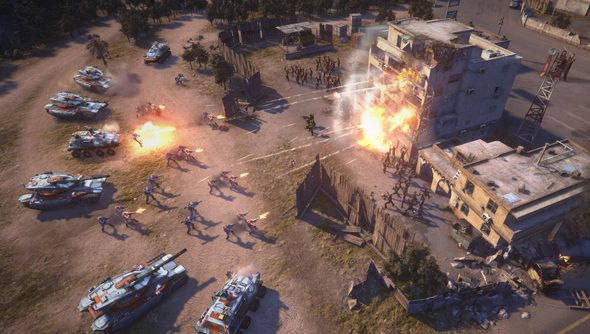 “We are not making the game you want to play.”

It was difficult to argue with EA’s statement on the state of the new Command & Conquer on Tuesday – but in closing Victory Studios outright it seemed the publishers were not only throwing out baby and bathwater, but also pulling the vinyl from the floor and the tiles from the walls, before dumping the lot in a skip for the whole street to see.

That’s a sentiment (unsurprisingly) shared by the studio’s community manager, who believes the team would’ve really had something in just a “few more months”.

“I am actually very sad to see my favorite franchise being put to rest,” wrote Eric Krause. “Especially that sudden and a game close to launching. Did we do everything right? Hell no! But we were a talented team that made a lot out of what we had.”

Krause said that the studio had attempted to challenge the “given” mechanics of the RTS – “the status quo” – and build a new vehicle worthy of the C&C name. But the pieces hadn’t yet come together.

“The game wasn’t there yet and it would have taken a few more months to get the basics to where they needed to be,” he admitted.

That said, Krause claimed Victory’s future roadmap looked “much more promising”. The series’ longstanding practice of infantry crushing had been implemented just last week, alongside the first part of the studio’s major pathfinding overhaul. Elsewhere, the team had been working on the episodic campaign missions announced at GamesCom.

“But well, EA decided that they don’t want to continue the project and there are many sides to the story of why exactly they decided to do so,” said Krause. “I will not go into the details because I don’t know all the pieces and the ones I know are not necessarily meant to be discussed on a public forum.”

Looking forward into a regrettably tiberium-free future, Krause wasn’t hopeful for the revamped series. He confirmed that the entire team at Victory had been let go – including veterans like C&C3 lead designer Samuel Bass.

“While I hope that the franchise will finally get a worthy new installment to positively overshadow C&C4 and the cancellation of this attempt, I don’t think that it will happen any time soon,” he concluded.

Sadfaces all round. Did EA really need to dispose of an entire studio before it’d made its first game? And yet, that ugly idea rears its head again: perhaps Victory really weren’t making a game any of us wanted to play?