When I last found myself playing Conan Exiles, back in February, it left me rather disappointed. Instead of swashbuckling sword and sorcery adventures it only seemed to offer busywork and boredom. The call of the Hyborian Age is strong, however, and so I once again find myself struggling to survive in a land that wants me dead. And this time it’s a little bit chilly, as I’m exploring the Frozen North update.

Want to know what Conan Exiles is like to play without the new expansion? We’ve got you covered.

I’ve spent a lot of my time in the Exiled Lands feeling pretty miserable. And exasperated. Yet, underneath the resentment and exhaustion, there’s this small spark of pride. Conan Exiles flung crocodiles, wolves, murderers, heat, snow, giants, and tedium at me in an effort to halt my quest, but I kept at it. And, somewhere in that struggle, I actually started to enjoy myself. At least, in spurts.

I’m getting ahead of myself, though. Let’s start, appropriately, at the beginning, where I found myself in an unwelcoming desert. The huge new area to the north – consisting of alpine forests, frozen wastes, and unwelcoming peaks – was my goal, but it’s a long trek away from where new characters spawn. The path in front of me went straight through the entirety of the pre-Frozen North map, as well as countless enemy camps and monster nests. 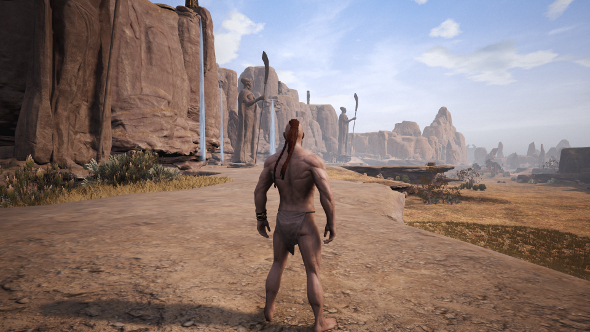 With the naivety of a novice adventurer, I failed to appreciate just what an undertaking I was poised to embark upon, naked and unarmed. I gathered materials, food, and water as I marched, with brief pauses to set up a fire and cook some delicious, miscellaneous meat. Unwilling to put down roots until I got to the North, I was only able to craft the most basic gear, but as I worked my way through the serpentine canyon that would eventually deposit me near my destination, I at least managed to clothe and arm myself.

At night, I cowered in dark corners, holding my breath. Sometimes I’d see the silhouettes of hyenas or a distant bonfire, signalling an enemy camp, and huddle further back into my corner. During the day, I made haste, but occasionally left the beaten path to hunt animals or gather rarer resources. When the appalling heat became too much for me, I’d run back to the green banks of the river that wind through the canyon.

Frozen North’s introduction of temperature means that parts of the desert and tundra can freeze or burn survivors. Making cool or warm clothes – or, indeed, hot or cold beverages – becomes essential to survival as a result. Time of day and weather effects like rain also have an impact on the temperature, making it an obstacle that keeps you on your toes. Planning for big journeys is, as you can imagine, particularly important now. 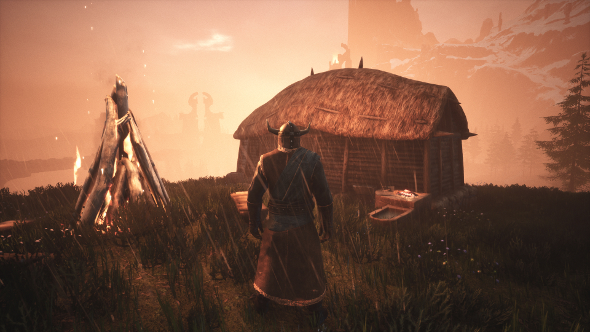 It may have been tough, but, looking back, I can regard my epic schlep with fondness. Instead of working away at crafting tables or grinding, I was on a proper adventure to escape the heat of the desert, and start a new home in lands more appropriate to my Nordheimer character. It was a big, all-consuming objective. And it was a real challenge. I used stealth and guile – not to mention the complete lack of shame that allowed me to run away at the drop of a hat – to reach my goal.

But after what felt like a lifetime of travel, disaster struck. I finally arrived in the North, narrowly avoiding being gored by a rhino as I fled the desert area. Ahead of me were rows of giant pines, set against the imposing mountains that served as a hunting ground for an army of wolves. These lupine aggressors immediately charged at me and unceremoniously mauled me to death. I was posthumously deposited at the bed I had most recently slept at, near the top of the canyon. Not so bad. But, due to somehow spawning above, and not on, the bed, I promptly fell to my death. That second demise kicked me all the way back to the southern tip of the world. The entire journey had been a waste.

See, Conan Exiles is trying to be an MMO as well as a survival game. This is good when it means there are dungeons and raids and clans clashing over player-created cities. It’s not so good when it essentially locks you out of content because of your level. It wasn’t such a huge problem before – you could traipse all the way across the map and, with a bit of luck, survive even if you were playing a fresh character. But in the North there’s a massive difficulty spike, and even basic wildlife such as wolves or boars can easily kill anyone below level 20. 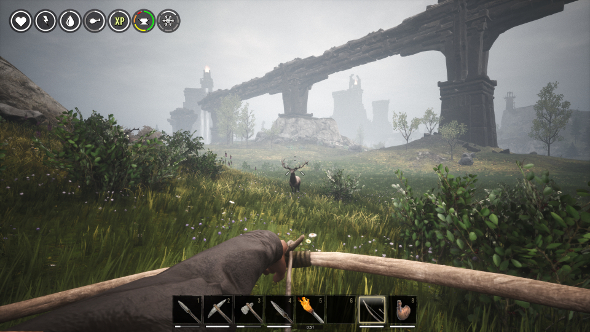 Even more than stats, the problem is that you need high-level gear to be able to tackle the North, and Conan Exiles’ crafting system is infuriatingly tied to its levelling system. You get points with every level, which can be spent on one or two new sets of crafting recipes that all have level prerequisites.

To unlock all the recipes for iron weapons and fur armour, for example, you need to be at least level 20, and own a relatively kitted out base – complete with a multitude of crafting tables. Gathering the necessary resources isn’t too tricky, but the limitations imposed by the RPG system constantly get in the way. Ultimately, the fastest way to level up is just to kill things. Lots of things. So while my earlier journey provided a welcome respite from grind, I still ended up having to hunt plenty. For days.

It wouldn’t be such a chore if the combat was enjoyable. Collision detection, visual and audio feedback, the feel of weapons – it’s all completely off. It’s dull, ugly, and unfortunately the thing you’ll be doing the most. Poor AI compounds the problem. Animals and monsters are utterly brainless, walking around in circles – attacking sometimes, ignoring you others – and while human AI has apparently been improved with the update, I honestly couldn’t tell. Perhaps worst of all, the game now forces you to put away your weapon, or anything you’re holding, when you sprint. No more glorious charges with axe held aloft, then. 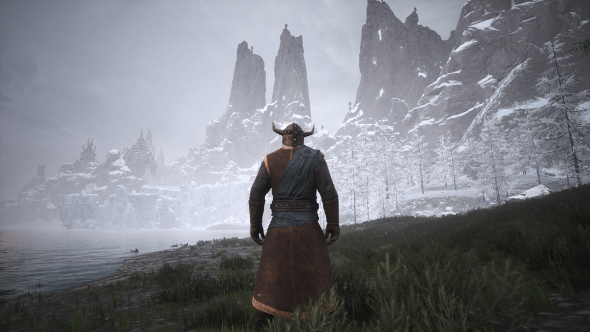 Eventually, decked out in furs, I finally strode north again, and even managed to stand my ground, establishing a modest base by a picturesque lake. Settled and levelled up a little, my enthusiasm started to rise again. But Conan Exiles continues to hide all of its best bits near the endgame. While I was glad to finally reach it, it felt like a lot of work.

After 30+ hours, it starts to feel like a Conan game. Rather than just surviving, I’ve been going on proper adventures. On the weekend, I decided I wanted to upgrade my furs, as they were starting to smell and I was keen to delve into the game’s tricky dungeons. I left my camp on a foggy morning, and headed even further north, where the trees make way for spears of ice and glaciers.

After a steep climb – there’s a proper climbing system now that evokes Breath of the Wild’s – I was ambushed by a skeleton and a sabretooth cat. Were they friendly? Was the cat the skeleton’s pet? They weren’t forthcoming with this information, so I just killed them. 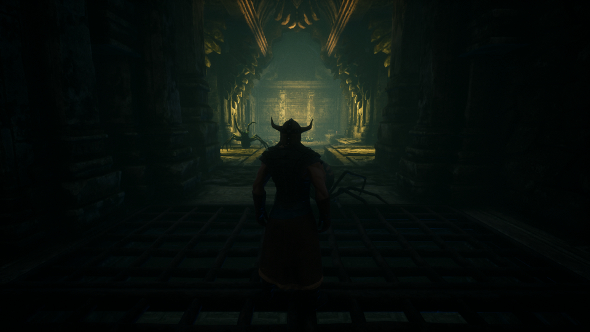 After that, I encountered some huge rock monsters, larger than anything I’ve fought in the game before – even the elephant I got into an altercation with a few days prior. While these rocky foes hit hard, they move slowly, and lunge with clearly telegraphed attacks – easily avoided by dodging out of the way. Even so, after besting two of them I felt like quite the impressive barbarian. Better yet, mining the corpses furnished me with some of the black ice I’d need to make new equipment.

I was thinking of heading back when I saw an elaborate temple-like structure in the distance. I’d been avoiding such buildings in the South, but now that I was tougher, I thought ‘why the hell not?’ Just 15 minutes later I was running in the opposite direction with my tail between my legs, making a mental note that I should return with some friends. At least I managed to loot a few chests and, more importantly, get out of there alive.

On my way home, I finally spotted some mammoths. I could have killed them for their hides, or maybe to make a mammoth display in my hut, but I didn’t. Mammoths are rad, and there was no way I was going to murder them senselessly. Instead, I took some pictures and left them to enjoy the rest of their day. Cheerio, furry chums! 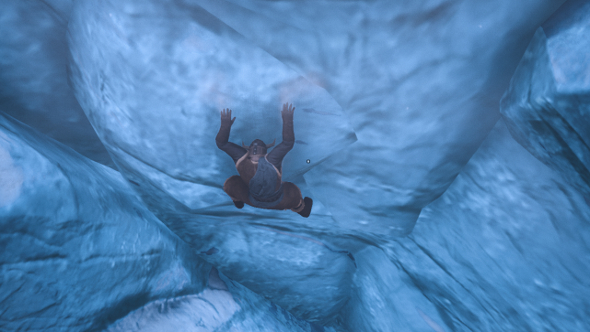 Even though I’ve still been bogged down in relatively mundane activities like fishing and brewing – both new additions to the game which give a more consistent, low-effort source of food and protection against the cold – the North still seems like a more exciting, fantastical place. There are frost giants instead of rhinos. Skeletons instead of angry, naked people. And yes, the mammoths.

But, despite my fondness for Conan Exiles’ new region, I can’t shake the feeling that developers Funcom have their priorities all wrong. The two most glaring problems with the game are that it takes a long time for anything interesting to happen, and the combat is awful. Frozen North adds more to the later game and throws in more dangerous enemies for good measure, while almost willfully ignoring the early game. And while, with time and effort, the game starts to pick up, the combat never stops being just, well, crap.

Conan Exiles is certainly bigger now. And a bit more thrilling. But almost every single one of my concerns from February persists, including the terrible official server performance. If you’ve got a group of friends willing to put in the time it takes to build massive settlements and reach the god-summoning, player wars, and dungeon romps, then there’s fun to be had. But it can be a real slog to get there, and despite my memorable adventure, I’m still not convinced it is worth the effort.