A barrage of enemy fire rains down making this desperate run for cover feel almost helpless. There’s little to hide behind, and scurrying down a stark concrete corridor I can see there’s only one door left to try. Fortunately, it’s open, so I tumble through it – suddenly, everything is different.

This new space is so placid. The wails of enemy weaponry from seconds ago feel like distant memories. More strikingly, the decor has changed entirely. Dark faux mahogany trim and kitsch patterned wallpaper lend this side room the feel of the 1970s – perhaps a stately home given to an eccentric interior designer. It’s peculiar, for sure, but it’s also a much more comforting place to be than the brutalist hellscape I’ve just fled.

Actually, the detail of the wallpaper is incredible. Stepping forward to take a closer look at those textures, the wall separates into myriad geometric shapes. They fold in on one another, over and over, leaving a portal. Stepping through, I’m in a slightly different version of the room I just left. Maybe not quite as comforting as I thought.

Welcome to the remarkable setting of Control, the latest game from Remedy, creator of Max Payne and Alan Wake. The entire game takes place in a single building named The Oldest House. But as the Remedy staffer on hand during my preview session confirms, it’s a Tardis-like structure that houses a potentially near-infinite play space. 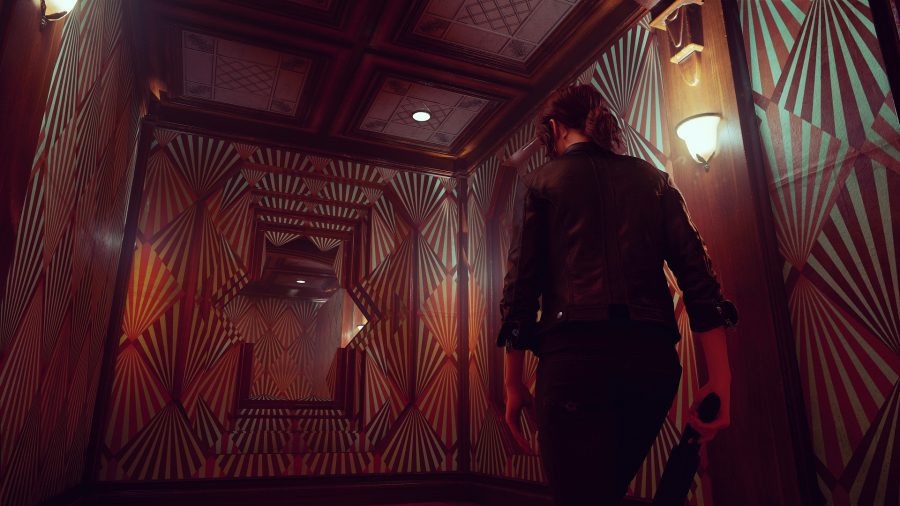 Control absolutely follows in the footsteps of Remedy’s most famed works. It’s a straight up third-person action-adventure game with conventional shooter leanings, and it certainly continues the eerie, neo-noirish tonal lineage that was so prominent in the worlds of Payne and Wake. In another moment during my hands-on time with Control, a beam of light guides me through a room as a disembodied voice fills the space, and images flicker over the screen. It might not be scary, but it’s hard not to be reminded of the infamously harrowing ‘blood maze’ nightmare section in the original Max Payne.

it can feel like you’re playing on dated display technology

If Remedy has played it safe with Control by sticking to game design conventions the team knows, it’s surely been a wise move – innovation for innovation’s sake is often a fool’s errand. Mechanically, the gameplay in Control feels comfortable and familiar, not dissimilar to the studio’s previous game Quantum Break. If you’ve played a third-person action adventure game before, you’ll barely need a tutorial here. Instead, the game design focus seems to have been on the small details.

The game tells the story of Jesse Faden, who has recently found herself as the director of The Federal Bureau of Control; a mysterious US governmental division charged with investigating and containing paranormal phenomena. The Bureau has made a home in the aforementioned Oldest House which is a New York building that exemplifies the brutalist architectural movement. Famously divisive, brutalist structures are blocky, unembellished, and exude big totalitarian energy. 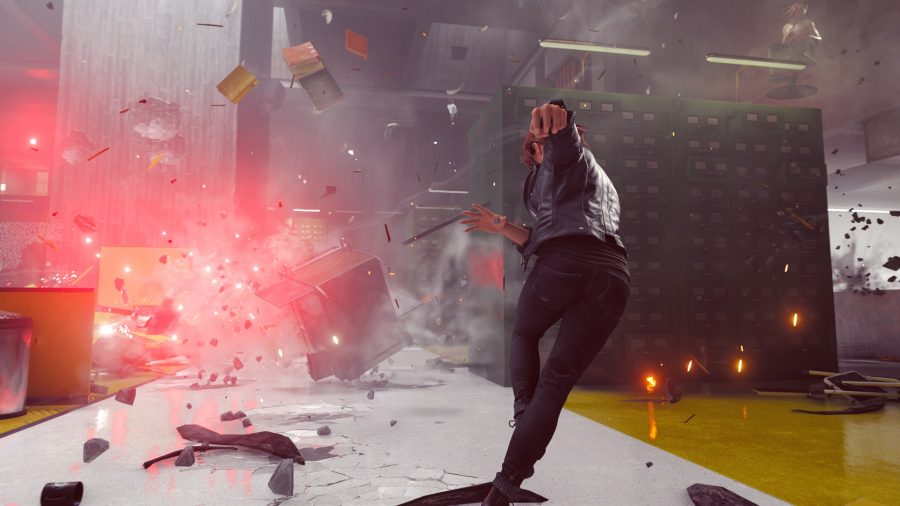 Inside The Oldest House, everything’s going awry, largely due to an invading supernatural force referred to as the Hiss. Jesse’s predecessor has been killed, staff are persistently possessed, and all sorts of strange entities are up to no good, toying with the very fabric of the building that seemingly imprisons them. As such, Control seems to weave a classic haunted house mystery yarn, albeit without the pesky kids and portrait paintings with eyes that follow you around the room. At least in my preview I didn’t find anything quite so Scooby Doo.

Instead, The Oldest House is subtly unsettling, uncanny, and hard to trust. That’s in no small part thanks to its mishmash of aesthetics. While the game is set in contemporary times, the Bureau favours older technology, due to it being a little more resistant to paranormal mischief. At every turn, flickering projectors, ageing computer terminals, and rows of paper filing drawers lend a sense that Control’s setting is a place where things don’t add up. The past and the present seem to coexist. Sometimes the colour palette across the board is a little oversaturated and gaudy. In those moments, for all the visual polish and detail, it can feel like you’re playing Control through dated display technology. In this haunted house, even the fourth wall seems to hide unsettling creaking sounds.

Each space is also packed with remarkable detail. It can feel like even the most incidental area is a set dressed with the attention typically given to a blockbuster movie. From the items scattered on desks to the furniture and décor, Control presents a space that appears well used; worked in by generations of staff. And that detail is important, because Control is really a game about smashing things up. 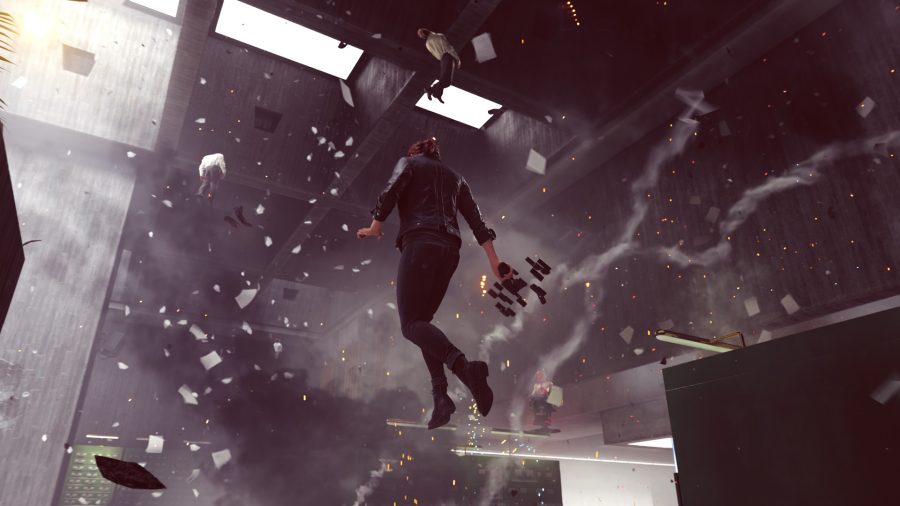 Jesse, for one, has a suite of powers that let her remotely move objects, rip up the very fabric of the building, and fling objects about to send enemies tumbling. The building itself also has a knack for breaking apart and becoming contorted, and it’s quite normal to see sections of concrete or members of staff hung suspended in mid-air. When a space is separating from the laws of physics, the details really emphasise the chaos.

Jesse’s quest is ultimately about bringing The Oldest House and the powers within it under control, though with limited time to explore, my endeavours only made a mess of the place. Fortunately, that mess was always beautifully lit. The lighting in Control certainly serves as a language. It communicates where to go, it sets the distinct tone of different areas, and it always looks very lovely, whether drenching crooked concrete forms in a warm red glow, or teasing you with the sense that you’ve found a cosy sanctuary amid the chaos.

Control is really a game about smashing things up

Again, in terms of gameplay, Control is fairly conventional. You run around, explore, shoot, and solve environmental puzzles. Jesse’s supernatural powers means she can float, as well as deliver a handful of melee moves like ground pounds. Her chosen weapon is a weapon that chose her – a shapeshifting, highly-customisable gun that brings different functions as it changes form. Named ‘The Service Weapon’, it’ll only cooperate with those it finds favourable, and it’s that dynamic that sees Jesse selected as the Bureau’s director. 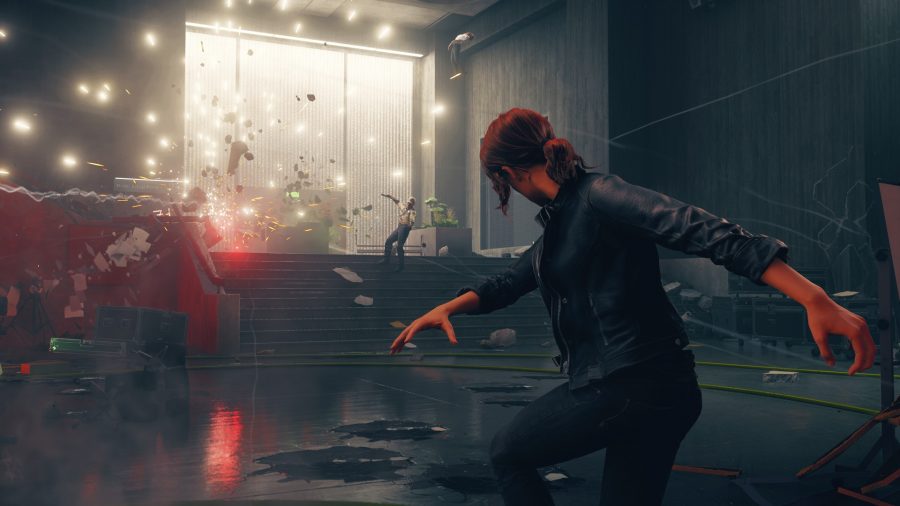 The protagonist can also use mind control to take over enemies and turn them into allies, and thanks to a skill tree structure, her abilities are always evolving. Really, these are all mechanics we’ve seen in other games. But Control’s potential to be captivating comes from the interplay of familiar interactions and a rather special, ever-shifting building.

Related: Burst into the best action-adventure games on PC

The Oldest House offers something of a Metroidvania environment, and therein lies a challenge for the developers: how to deliver plot and pacing with all the right beats to tantalise, while still allowing for some player freedom. To find out if Remedy has got that right, I’ll need to sink a little more time into Control. But one thing is sure, regardless: Control’s strange setting is a place built with detail, intelligence, and eccentricity.