Custom loop experts EKWB recently reaffirmed their goal to create a closed-loop cooler with their MLC-Phoenix, but they aren’t the only company looking to bridge the gap between custom and closed coolers. On the flip side are Cooler Master, who are now dipping their toes into custom loops with their MasterLiquid Maker 240.

Your PC may be perfect, but how’s your peripheral game? Here are the best gaming headsets around.

It seems fitting for Cooler Master’s Maker series to involve a custom loop kit. They’ve been championing PC building creativity and all the weird and wonderful ideas that go with it for some time, and you can’t fit much more personal flourish into a build than you can with a custom loop.

The company also aren’t afraid of making a product that excels – and for a high price. Their MasterWatt Maker 1200 MIJ PSU is an incredible unit, but it costs a staggering $1000. For that money I’d want my PSU to somehow increase my fps tenfold too. Luckily, the MasterLiquid Maker 240 isn’t quite that expensive, but it’s no bargain buy at $399 – although the price may change before launch.

The kit includes one 240mm radiator, two RGB fans, a reservoir and pump combo, a CPU block, 1.2m of tubing, and the coolant to fill it up. No further details on the pump or block have surfaced so far. 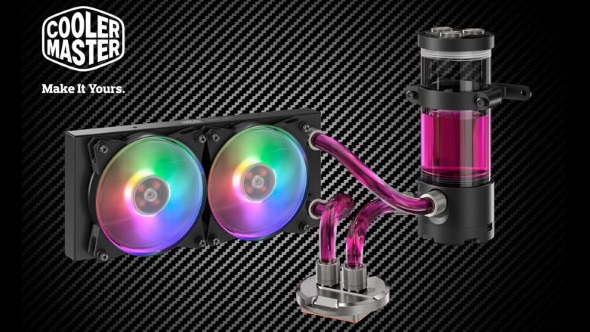 Coming in at around the same price as EK’s Phoenix cooler, these products target the same audience, more or less – albeit with two varying approaches. Making custom loops a little less daunting seems to be the end goal for both companies, although the EK Phoenix does have the benefit of minimising installation hassle, thanks to its hosepipe-like connectors – but this could also be detrimental to the system.

What the MasterLiquid Maker does bring to the table is the option to expand your loop beyond CoolerMaster’s own components, preventing a lack of manufacturer support from ending your cooler’s lifespan early.

In the past Cooler Master also tried their hand at an upgradeable closed loop – the Glacer 240L v2. This time around, however, they’ve ditched the clamp system and instead favoured a build-it-yourself design. Thanks to the standard G1/4 fittings, this unit can be expanded to an extra radiator, a GPU block, or even motherboard cooling if you really want – all without any proprietary connections from Cooler Master.

What will be a dealbreaker for Cooler Master is how well put together this kit is. Custom loop kits are not a brand new concept, and there are plenty of water-cooling companies putting together their own starter kits comprised of quality components at good prices across the web. In any case, Cooler Master are looking to launch in February – let’s hope the RGB fans are not the only component that makes the MasterLiquid Maker stand out from the crowd.