The new MasterPulse Pro headset has been designed to flip between open and closed-back operation to enhance or knock back the bass – and it’s all done with magnets.

Read more: check out our pick of the best gaming headsets.

Cooler Master’s new headset features magnetically-attached covers to fit over the sides of the ear-cups, allowing you to drastically change the sound profile and switch from open and closed-back principles with minimal fuss. But the way they’ve created the acoustic chamber gives it a ported design that is able to emphasise the bass tones when the covers are removed, activating what Cooler Master are calling Bass FX.

In this open-back mode you also get a more open soundscape, which would normally sound more natural than the more claustrophobic audio you can get with closed-back cans. By activating the Bass FX function though low-frequency tones are far more dominant, being designed for ‘splode-laden gaming or bass-heavy music.

It also means there’s far more sound leakage too, so if you’re likely to be gaming within earshot of any other human lobes that extra bass is really going to bug them.

The flipside is that you can instantly switch to a closed-back design by slapping those magnetic covers back on the sides of the ear cups. With the sealed chamber the low-frequencies are balanced out and the audio should sound a little more natural. And you get the added benefit of a little passive noise isolation for both you and the people sharing your living space. 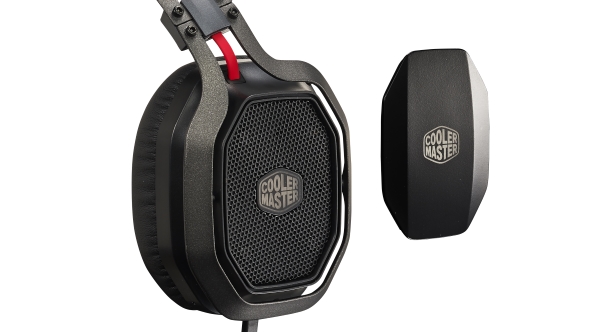 The MasterPulse Pro headset isn’t the first to offer both open and closed-back operating principles in one package, but I believe it is the first to allow you to switch so quickly and easily between them. The Plantronics RIG 500E is the only other set I can think of, but that requires you to switch out the full driver package from the headband.

They also come with an onboard soundcard with virtual 7.1 surround that can be activated or deactivated at the press of a button on the in-line remote. And RGB LEDs because someone must be giving them away free with every box of cereal peripheral manufacturers open.

The 44mm drivers don’t appear to be anything special though, only capable of delivering a pretty standard frequency response of 20Hz-20KHz. I’d always recommend going for a headset with as broad a range as you can find, such as the perennial HyperX Cloud Pro cans or the Audio Technica ATH-AG1x. The wider the range the more detail you get in both the low and the high end audio.

The MasterPulse Pro headset also seems relatively weighty too, coming in at 332g without the cable. Though Cooler Master are saving a little heft by keeping the omni-directional microphone hidden inside the left-hand chamber.

The versatile new headset is going to be on the shelves at the end of October with a ticket price of £85 and potentially around $100 in the US. Cooler Master will also be releasing a wireless version, called the MasterPulse Maker in early 2017.