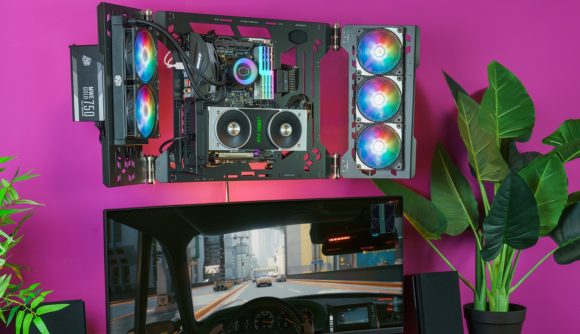 Cooler Master has opened its 2021 showcase, with concepts and upcoming products. From power supplies with their own screen to RGB monitors, the item that really caught our eye was its MasterFrame 700 hybrid PC case, which Cooler Master pictured mounted above a monitor. If you squint, it almost just looks like a secondary screen.

How is it mounted, we hear you ask? It uses a 100mm VESA mount on the rear of the case, the same way you’d mount some of the best gaming monitors. We’ve seen DIY wall mounted PCs shown off on Reddit before, but if you want all that karma without having to do any of the technical work, then this case would be ideal…

The case is advertised by Cooler Master as a hybrid case, with multiple hinges that allow it to transform between a test bench and an open air PC case without having to move the hardware components themself. And, with support for up to three water cooling radiators and built-in pump mounts, this would also be one of the best cases for overclocking your CPU and GPU.

Of course, if you were to run your PC mounted like this, you’ll want to blast out the dust more regularly as you can’t rely on the cover you’d get from a normal case. In its standard sheltered mode with a glass cover, it looks pretty cool too, much more so than the same-same design of most chassis. 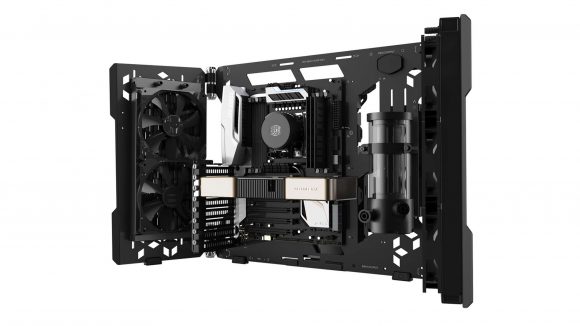 If you wanted to stand out even more, the MasterFrame 700 is also mod-friendly, as Cooler Master states each part of the case can be removed for ‘painting or wrapping’. You can view more information on Cooler Master’s product page.

And before you think this is just a concept like Razer’s gaming cockpit, it’s not. In fact, it’s just around the corner with a March 22 release date and MSRP of $169 – which isn’t too bad considering it’s certainly an enthusiast product.