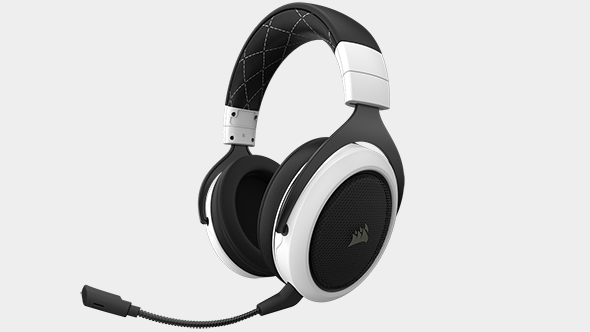 Corsair’s first budget-friendly HS series headset, the HS50, entered the gaming headset market like a wrecking ball. This time around, Corsair has tried its hand at a wireless model, the HS70. So the question is, can Corsair go two-for-two and rise to the top with a wireless gaming headset that manages both performance and affordability?

Right off the bat, if you are familiar with the HS50, you’ll notice the striking resemblance between the two. Very little has changed in core design with this second addition to the HS series, and the wireless functionality evidently fits snugly into the standard headset chassis. That means the understated look, minimal gamer flair, and RGB-agnostic style is carried over from the HS50 – but now comes in white.

Don’t mind a cable? Here are the best wired gaming headsets of 2018.

That also means the padding on the ear cups is a little stiff, as is the ear cup frame, and the headband padding could be a little more supportive, but overall comfort is not an issue with the HS70. Corsair has put together a design that evidently fits both cost and style, and if it ain’t broke, don’t fix it. Also, the extra wireless tech only adds another 11 grams onto the overall weight of the headset, taking it from 319g with the HS50 to 330g with the HS70.

Audio is provided exclusively via a wireless 2.4GHz connection, which scuppers any connectivity with non-USB friendly devices, and means that Xbox One, personal device, and analog connectivity – when the battery runs low – are all out of the window. Luckily, Corsair has put a pretty chunky battery, rated for up to 16 hours in the headset, which is surprising considering the fairly minor weight gain over the wired option. 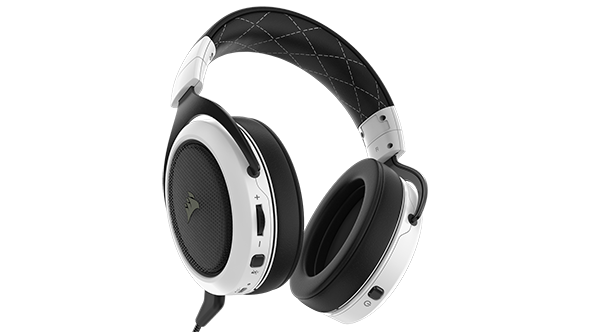 But despite the Corsair HS70’s PC and PS4 exclusivity, the audio quality isn’t diminished by the wireless connection. The treble can be a pretty sharp at times, which is especially noticeable within heavy drum cymbal hits or really steely guitar tracks. Despite this, audio reproduction is competitive within this price range – whether compared to fellow wireless cans, or even wired sets. That’s quite a feat for Corsair’s more value-oriented headset range.

The same is true for in-game audio quality. The audio is clear enough that 7.1 isn’t a necessity for directionality, although is offered within the Corsair CUE app. It’s a very heavy-handed application, however, was simply too much distortion for me to really enjoy the game with it activated. Aside from that, audio is distinct and the sharp edge with the treble is less prominent when only intermittent in-game. Plus, if you think hearing past your forties is overrated – the 50mm drivers can really pump out some serious noise. 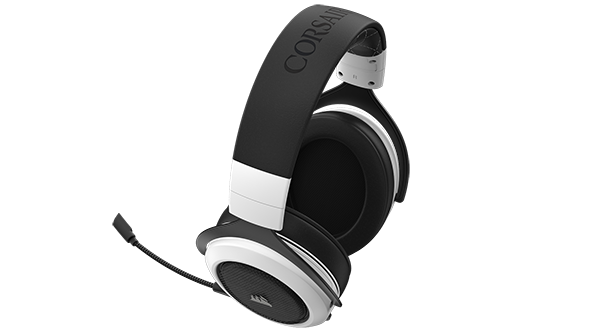 Aside from that, the CUE app also offers basic microphone and sidetone controls within the software, and there’s also a small collection of EQ presets and settings ready to go. A few of these can lead to quite a bit of distortion in bass-heavy hits, which are exacerbated massively by these overly-generous presets, but the ability to swap between presets and create your own means you aren’t stuck with an off-balance for good. The flat ‘Pure Direct’ preset will be a good fit for the most part.

Key to any gamer headset is the microphone, but I’m pleased to report the HS70’s detachable mic offered really clean vocals. Ambient noise was kept to a minimum and only the slight clatter of my Cherry MX Brown mechanical keyboard was noticeable during playback. However, the rustle from my breath was picked up pretty regularly, and could be solved by the inclusion of a pop filter. 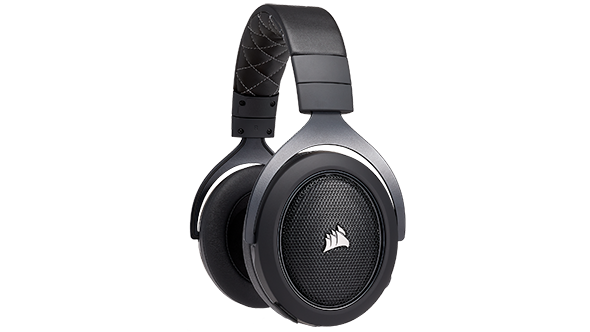 The Corsair HS70 has taken most of the good points from Corsair’s HS50, but cut the cord. It’s a pretty good deal, too. The wireless levy is a prominent feature in the headset market, and at $90 / £100, the HS70 is only a little shy of double the price of the HS50. But that’s still considerably cheaper than Corsair’s own Void Pro headset, or the Logitech G933.

Corsair has managed to put together a great wireless headset with the HS70. Its comfortable design, simple styling, and clean audio reproduction all come together in a headset that proves wireless doesn’t require a triple-digit price tag (US Dollars, anyways), and that’s sure to create a vacuum in the market for further wireless cans at this price point.

Corsair has created a wireless gaming headset that not only competes with its wired compadres in quality and sound, but also in price. The sound still requires a little work in places, the design is a little stiff, and there’s no 3.5mm jack, but I’ll admit these are worthy sacrifices to keep costs low. While many wireless headsets are good value comparatively, the HS70 is simply good value.