Mechanical switches have become so synonymous with gaming keyboards that it’s jarring to see a known gaming hardware brand like Corsair releasing a membrane board as part of its gaming range. Corsair’s K55 Pro XT is an upgrade to its 2016 budget offering, which stood out for offering several premium features for an MSRP of just $49.99 / £54.99. Corsair is also releasing an updated version of that $49.99 board as the K55 RGB Pro, so it’s important to note that its budget offering isn’t going anywhere.

Even by today’s standards, $49.99 is impressive for a board with RGB backlighting, dedicated media and macro keys, a detachable palm rest, and spill resistance. The Pro XT’s $69.99 / £74.99 MSRP makes it $20 / £20 more expensive than the standard version, putting it closer in price to some of the best gaming keyboards going, so what’s the difference?

You would be hard-pushed to tell the two apart looking at them side-by-side. Both have the same layout and design, and both boards offer seven media keys and six macro keys. Visually, the core difference is in the quality and range of RGB effects each board can achieve. The Pro XT upgrades the five-zone backlighting of the standard keyboard to per-key RGB with crisp and bright colours, which you can easily tweak using Corsair’s iCUE software.

There’s a minor performance boost in the form of 12-key rollover, rather than the standard K55’s eight-key rollover, but that’s pretty much it in terms of obvious differences. 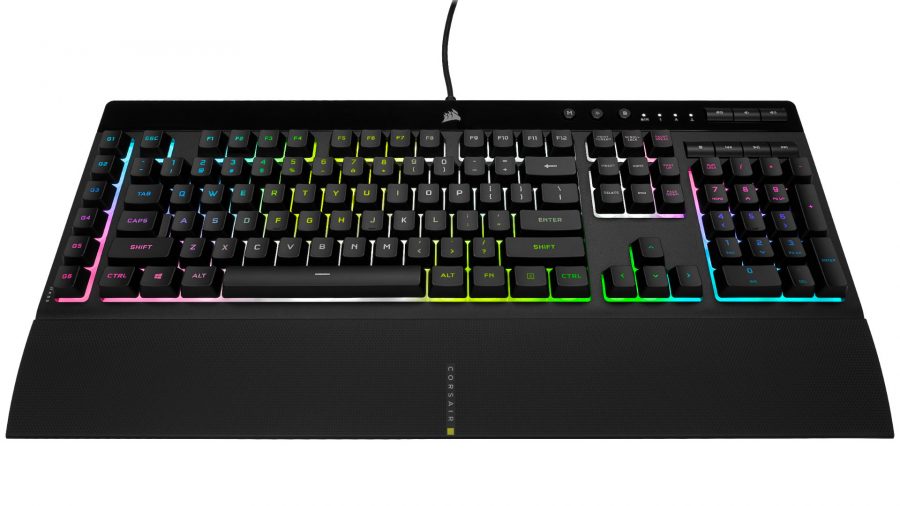 As you might expect from a budget keyboard, the K55 Pro XT is made of plastic, which feels sturdy enough while gaming or typing, and barely creaks when you pick it up and move it around. The matte finish on the majority of the board also feels suitably premium for a plastic product, although there’s a horrid, glossy bar at the very top of the keyboard that makes dust and fingerprints as easy to spot as the RGB – I get wanting to add some kind of accent to break up the block of matte black, but this is not the answer. Mercifully, the dated USB connector of the original K55 has also been updated with an understated new look and an excellent textured finish that makes it easy to plug in and out.

Those added media and macro keys mean this keyboard is quite bulky, and it might be difficult to squeeze it onto the best gaming desk if your setup is snug. At 481mm in length, 167mm wide, and 36mm tall, the K55 is definitely on the larger side. Compared to the K60 RGB Pro, it’s got an extra 40mm on the sides and 30mm at the top; even with a large desk I struggle to position this comfortably for FPS gaming. It’s also 940g, so it’s not exactly made for travel.

The fixed, central position of the cable – coupled with the fact that you can’t reroute it on the underside of the keyboard – is a little disappointing, and keeps the Pro XT feeling like a budget option. 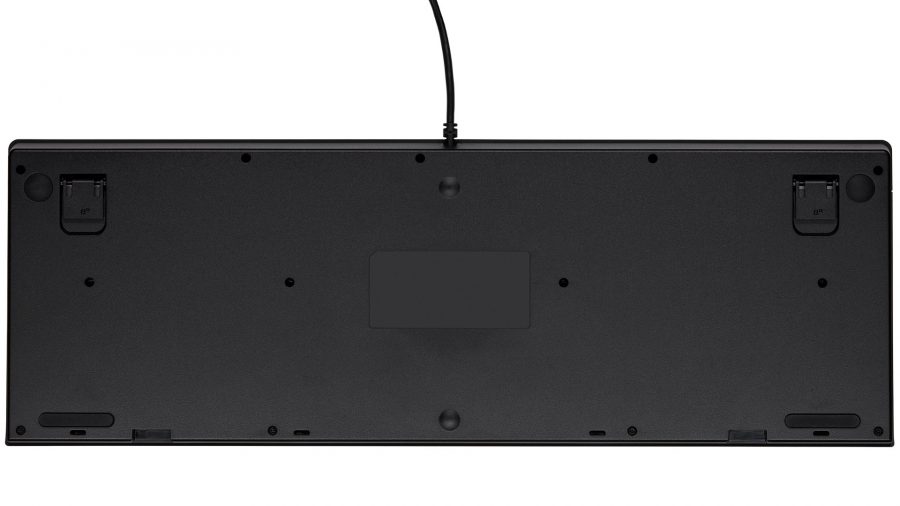 Considering this is a membrane keyboard with rubber dome switches, it’s actually not too bad for gaming. The keys feel stable and each keystroke is smooth, ensuring movement in FPS games is relatively precise. It’s no comparison to a mechanical gaming keyboard, but after a week of playing Rainbow Six Siege with the K55 Pro XT there were only a handful of moments where I wished that I was using my trusty HyperX Alloy FPS.

The switches themselves feel pretty close to Cherry MX Blacks, with heavy actuation, no click, and plenty of resistance. Membrane keyboards usually feel particularly flimsy when using larger keys, but thankfully Corsair has added metal stabilising bars to keep everything nice and firm.

The six dedicated macro keys that form a column down the left-hand side of the K55 can prove a little tricky to adjust to, and I found myself standing motionless a few times in-game as my hand had wandered over to the macros rather than the shift key. As I predominantly play FPS games and I don’t stream, these keys are largely wasted on me, but they offer superb value for money if you’re just starting out streaming and don’t want to splash out on a dedicated stream deck. Similarly, if you love MMO games, then these will come in handy for reeling off spell combinations mid-raid. 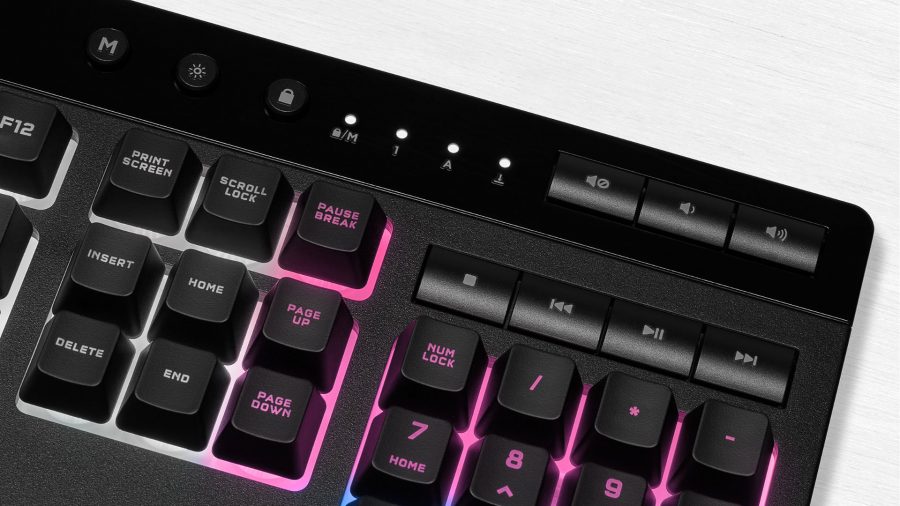 Whether or not the dedicated media keys are important to you is also a matter of personal preference. For some, they’re a deal-breaker, but I find them to be little more than a nice bonus.

But here’s the thing: most of that functionality (macro and media keys) is present on the new version of the standard K55. So really, the upgrade to the XT model comes down to how much you want to pay for better RGB and slightly better key rollover. If you’re going up to $70 / £75, you may as well push the boat out and go mechanical, too – the K60 Pro is just $10 more and the K60 RGB Pro adds customisable lighting for a $90 MSRP.

The XT version of Corsair's stalwart budget gaming keyboard doesn't do enough to justify the hefty increase in price. Yes, the RGB is gorgeous, but it's too much money to spend on a membrane gaming keyboard when there's a near-identical version for $20 less.