Corsair’s no stranger to a compact gaming keyboard, but it turns out that ditching the cumbersome numpad on its tenkeyless K63 and K65 models just isn’t enough for some players. The Corsair K65 RGB Mini takes things a step further as the brand’s first 60% mechanical keyboard, also shedding the arrow and function keys – but you know what they say: good things come in small packages.

It’s not the first 60% keyboard on the block, with Ducky, Razer, and HyperX propelling the tiny form factor into the mainstream. Corsair regularly produces some of the best gaming keyboards around, it’s safe to say the expectations are set pretty high for its 60% offering.

While the K65 RGB Mini makes the necessary sacrifices to reach its diminutive size, it still manages to exceed expectations with many of the premium features found in its full-sized counterparts. If you haven’t used a 60% keyboard before, however, then it demands a lot of time and patience as there’s a steep shortcut-filled learning curve. 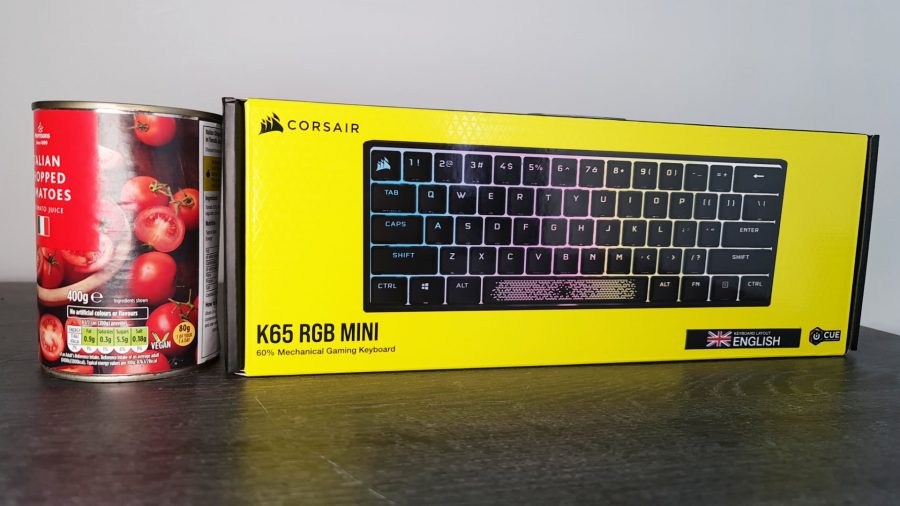 To keep the dimensions small, you won’t find a wrist rest included here. Before you think of adding your own, you might want to hold off, as the keyboard has a fixed elevation with no adjustable feet. I usually crank up the angle as steep as it’ll go, but had no issues with the gentler incline featured here – your mileage may vary, of course.

If you’re familiar with Corsair keyboards, you might be sad to learn that the K65 RGB Mini does away with the traditional brushed aluminium body, replacing it with a sleek LED panel that covers the entire board and boasts beautiful per-key RGB lighting. Corsair’s colours always pop, but this is in a league of its own when it comes to keyboard RGB, and can really help bring a setup together.

Even though it’s made of a slightly weaker ABS plastic, the lighting shines particularly well through the swanky spacebar – don’t worry, there’s an ordinary double shot PBT keycap included if you don’t like the added flavour. In fact, Corsair’s gone all-in with personalisation by releasing an assortment of double shot PBT keycap mod kits sold separately for $29.99 per set, and since it uses standard Cherry MX-compatible stems, you can use pretty much any artisan keycap you choose as long as it fits. You can’t go wrong with the default keys you’re provided with, though, as they’re made out of the same strong material and have a textured finish. 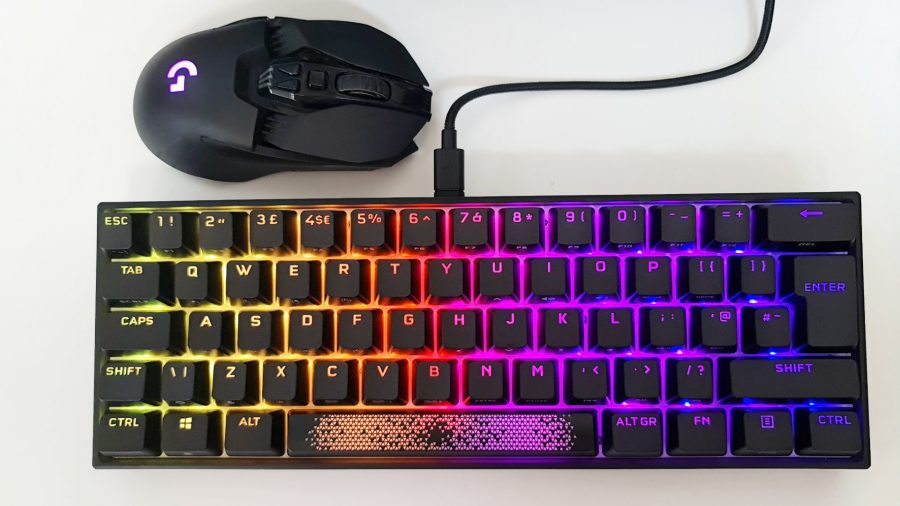 Unlike the Razer Huntsman Mini and HyperX Alloy Origins 60, which feature their own proprietary switches, Corsair sticks with Cherry as it has done so many times before. There aren’t as many choices on the K65 RGB Mini compared to the Ducky One 2 Mini V2, as there are no tactile options yet, but Cherry MX Red, Red Silent, and Speed Silver switches are still better than most gaming laptops out there – although it’s a shame Corsair’s lauded OPX optical-mechanical switches aren’t available here.

The elephant in the room is the large learning curve that comes with losing 40% of a standard keyboard. A lot of the familiar functionality is, expectedly, relegated to shortcuts via the FN key. The top row of numbers doubles up as your function keys, the media buttons span a cluster to the right, and you can even change the brightness, profile, or record macros without diving into iCUE – although this is probably more hassle than it’s worth when the software is a great deal clearer.

Corsair eases you into it with legends on the base of each key, but these are rendered useless if you rebind their functions in iCUE. And make no mistake, you’ll probably need to if you find yourself reaching for the arrow keys as frequently as I do. With just the one FN key to the right and the arrow keys being assigned to the letters U, H, J, and K by default, it’s either a two-handed job to use them, a bit of yoga for your right hand, or something you’ll want to change to make it more comfortable. Personally, I find the K, M, comma, and full stop keys more suitable, which is close to the default layout on the HyperX Alloy Origins 60. 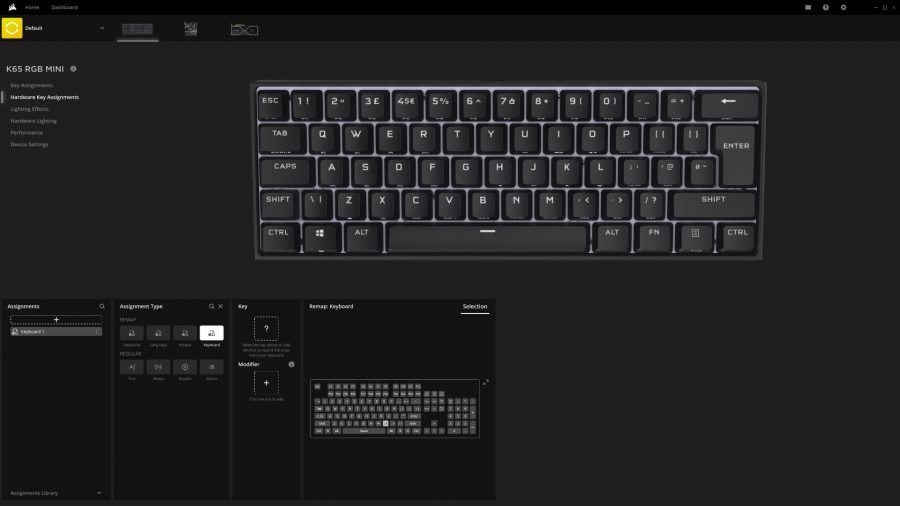 Under the hood lies 8MB of storage that can hold up to 50 onboard profiles, so you don’t need to fiddle about with your lighting, macros, and keybinds if you move the K65 RGB Mini from the best gaming PC to a laptop. The usual suspects are all here, too, with anti-ghosting and full N-Key rollover (NKRO) to ensure that every key press is registered accurately.

The K65 RGB Mini defaults to 1000Hz hyper-polling out of the box to avoid any compatibility issues, but it’s actually Corsair’s first keyboard that can reach 8000Hz via its Axon hyper-processing technology, twice as fast as the flagship K100. The leap from 1ms to 0.125ms sounds substantial on paper, but it doesn’t exactly translate to in-game performance as it takes longer to press down the key itself. While my casual brain didn’t notice a difference, however, the lightning-fast response time could work wonders in the hands of a pro. 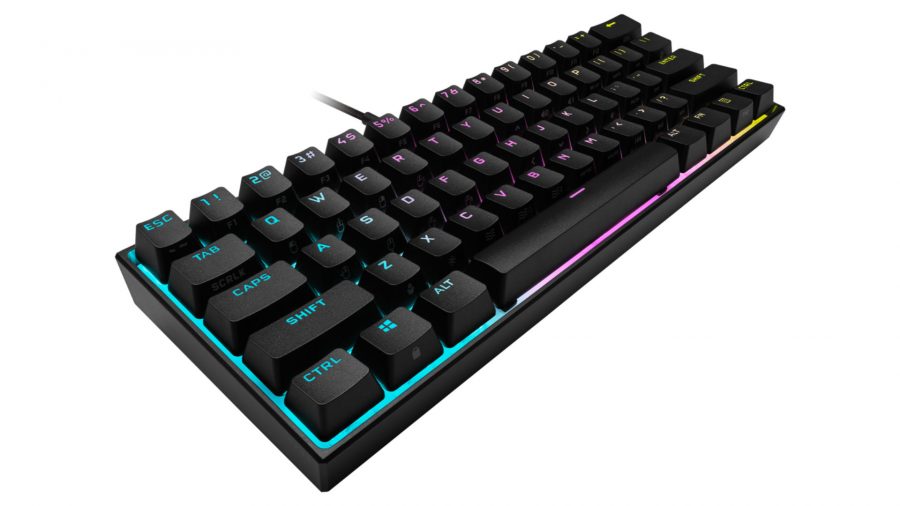 The tiny footprint of Corsair’s first 60% keyboard means it’s a little jarring for touch typists that inevitably find themselves reaching for keys that aren’t there. This positions it squarely in the gaming market, but even then, players of the best MMOs and strategy games will find themselves at a distinct disadvantage without the full array of switches at their disposal.

If saving space on the best gaming desk is your top priority or you want a great LAN companion to go along with the best gaming laptop, then the K65 RGB Mini is a fantastic choice and one of the best looking keyboards around. Otherwise, the Corsair K60 RGB Pro does pretty much all the same things, swapping the debatably unnecessary high polling rate out and returning the missing keys for just $99.99 / £109.99 in comparison.

Seriously, though, what’s with these naming conventions? It’s almost like the K65 RGB Mini is /primed/ for the K60 moniker. Absolutely robbed.

Corsair has one of the best and most beautiful 60% gaming keyboards on the market, but its higher asking price, questionable shortcuts, and steep learning curve mean it won't be for everyone.