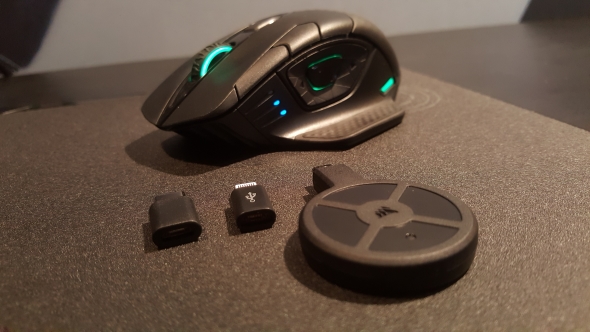 Corsair’s Concept Zeus wireless mouse and charging pad is now a reality, and it’s not alone because it’s brought a fully mechanical, backlit wireless gaming keyboard with it too. The new Dark Core RGB mouse, MM1000 mousemat, and K63 keyboard are cable-free and about to hit the market at the end of January.

Check out our pick of the best gaming keyboards around today.

We first saw the Concept Zeus prototype out in Taipei last summer (remember when things were warm?) and it’s now known as the Dark Core RGB SE and MM1000 combo. Corsair also announced a standard Dark Core RGB which is still wireless, but doesn’t have the capacity for cable-free charging via the MM1000 power pad.

Unlike the Logitech PowerPlay devices Corsair’s wireless charging uses the same Qi technology as the latest Samsung phones. Logitech, on the other hand, use electromagnetic resonance to continually charge their mouse via a field covering the entire mousemat. The Dark Core RGB SE, however, can only be charged wirelessly while it’s positioned precisely in one 5mm diameter circle in the top right of the MM1000 pad. 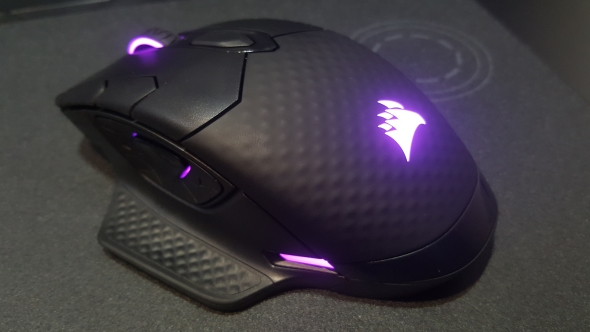 Corsair don’t see that as a weakness because their 7W wireless charging system is 20x faster than a resonance charger, and whether on 2.4GHz wireless or Bluetooth the mouse can game continuously for 24 hours. The difference in general use, however, is that with the Logitech system you don’t need to think about charging because it’s perennially being topped up even while you’re using it, with the Dark Core RGB SE though you have to stop gaming and place it in the correct spot. And when we were playing with it today it did seem a little fussy about where you positioned the mouse over the charging point.

But as a system it’s more versatile than PowerPlay as you can charge any other Qi compatible device too, and even if your device isn’t compatible out-of-the-box Corsair are including a Qi USB dongle in the MM1000 kit which you can use to top up your batteries.

In terms of the basic specs the Dark Core RGB and SE versions both use the same Corsair custom Pixart 3367 optical sensor, with a 16,000 max DPI. It’s also go swappable grips and can be used wired if you do find yourself lacking charge but with the need to game. 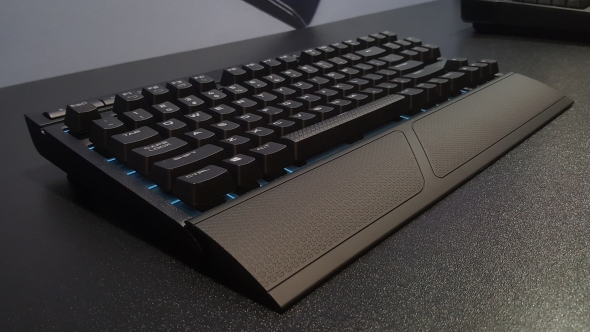 It’s not all about the mouse either as they’ve also unveiled the K63 Wireless keyboard. It’s sporting the classic excellent K-series Corsair keyboard design in a tenkeyless layout, and that’s because it’s been designed to drop into the K63 Wireless Gaming Lapboard too.

This combo, along with the wireless Dark Core RGB, makes for a family of products that will let you couch potatoes keep PC gaming on mouse and keyboard in your living room without dragging cables across the floor and trip your loved ones and pets. 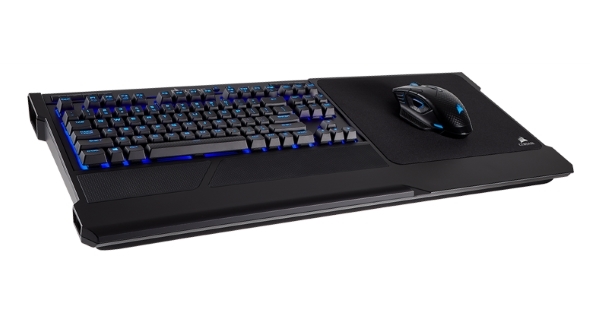 It features Cherry MX Red switches, blue LED backlighting and the same triple connection design as the new mouse. With both 2.4GHz wireless, Bluetooth, and cabled connection it’s a versatile board.

It’s also impressively long-lived too, so long as you don’t run those LEDs at max brightness, anyways. At the default out-of-the-box setting of 66% brightness you’ll get 15 hours out of it, but that drops down to just 10 at eye-bleeding 100%. But if you want to know why wireless keyboards don’t generally bother with per-key LED backlighting the fact that you’ll get 75 hours of continuous gaming /without/ the lights should tell you something.

Because security is a hot subject right now, it’s probably worth mentioning those pesky hackers will have a tough job stealing your passwords wirelessly (they do that?) as Corsair have added 128-bit AES encryption to the wireless connection. There is a tiny bit of added latency due to the encryption settings, Corsair estimate it to be in the region of 80 microseconds. With the response time of the K63 Wireless being 1ms as standard the encryption will mean that goes up to a 1.08ms. If that’s an issue for you Corsair have given you the option of disabling it, and in doing so hopefully disabled any forum/reddit whinging too.