Until the Corsair Virtuoso wireless gaming headset the company was better known in audio circles as the brand behind a bunch of affordable, but surprisingly capable headphones. The Corsair HS50 in one of our favourite cheap gaming headsets, and the HS70 sits alongside some of the best as our affordable wireless pick.

But the Virtuoso RGB Wireless is aiming for a different, far more premium sector of the market, and the impressive all-round package makes this wireless Corsair gaming headset well worth your consideration. It’s a beautifully crafted headset, and one which pushes Corsair’s standard gaming audio further than ever. And it sounds great, though I’m not sure it’s actually pushed the aural experience quite far enough…

Where the HS-series was all about taking on the HyperX Cloud cans, and beating them on price, the Corsair Virtuoso seems to be taking a more high-end, more audiophile-level aesthetic, looking for all the world like a set of Oppo PM3s. From the plush, padded headband and earcups to the robust, brushed metal frame, there’s a distinctly premium level of build quality on show.

Using Corsair’s Slipstream technology the Virtuoso wireless is able to boast an incredible 60ft of wireless range. Admittedly you’re unlikely to regularly roam 60ft from your PC while gaming, but it’s testament to the Corsair wireless tech that you go that far before it cuts out. Obviously that’s in ideal circumstances, probably with a clear line of sight, but I was able to head downstairs in the PCGN office and out into the car park before the audio cut out.

So you’ll definitely be able to potter out into the kitchen and make a cup of tea without having to remove your headset and leave the game chat… even if you are stepping away from the game. Well, unless you live somewhere rather more palatial than I. 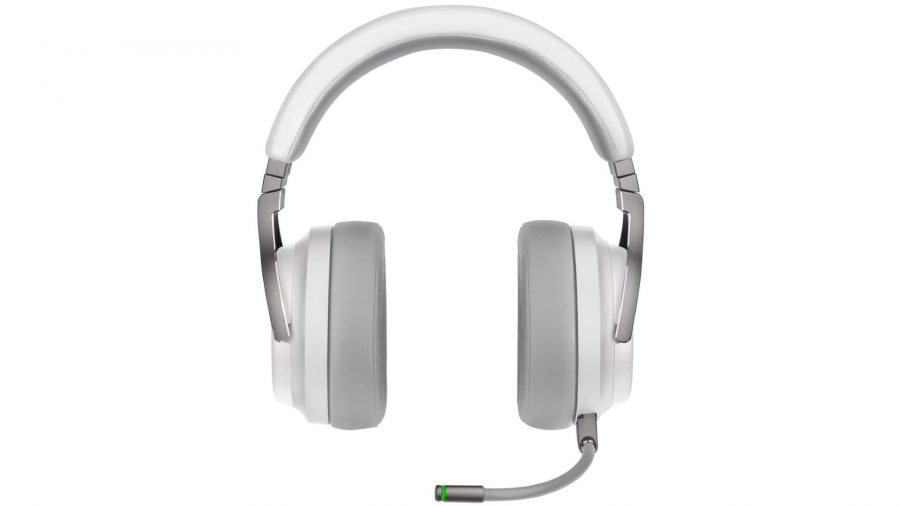 Corsair’s jammed a decent battery inside its stylish Virtuoso headset too, allowing for up to twenty hours of gaming on a single charge. Though you can also plumb in the supplied USB-C charging cable to keep playing while you power up your cans when you need to.

I know I’ve alluded to it before, but the Virtuoso really is beautifully built. The attention to detail is exemplified by the exquisite on-ear volume control wheel. There is just the right amount of resistance to its smooth action that it’s not going to catch your shoulder if you put the headset around your neck, and just enough to tell you it’s not just some off-the-peg wheel Corsair’s dropped in there.

And the audio is good too. Though if that sounds a little like damning with faint praise you might be right… Corsair has worked hard to ensure there is a higher level of audio quality to the drivers of the Virtuoso RGB Wireless than in its previous cans, but it hasn’t gone quite far enough for most PC gamers with audiophilic tendencies.

Those 50mm drivers have been tuned to deliver a frequency response range of between 20Hz and 40,000Hz. That’s twice the range of standard gaming headsets which chase some 20Hz to 20,000Hz ideal, but while that does mean there’s a huge amount of depth and detail to the high-end tones, the same just doesn’t ring true for the low-end. 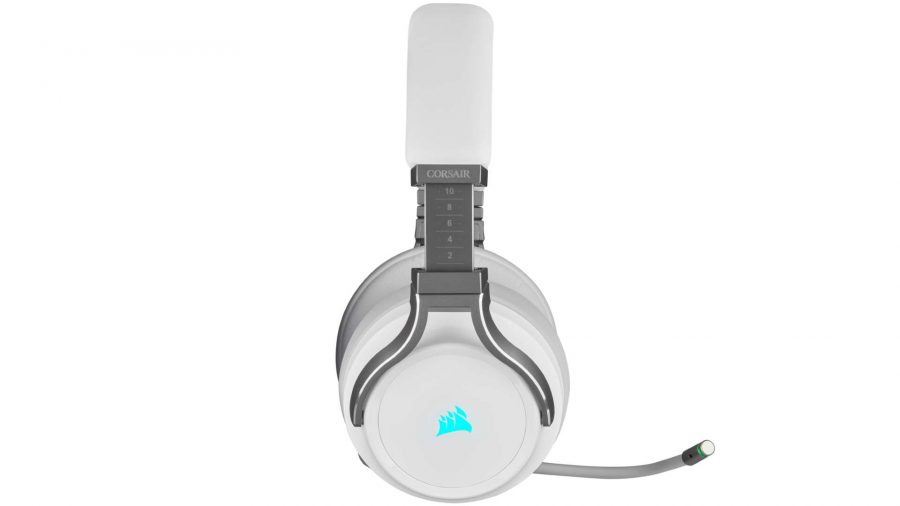 That’s not to say the audio is poor, it’s just that when you stack the Corsair Virtuoso up against the SteelSeries Arctis Pro or Razer Thresher Ultimate – two of our favourite wireless headsets – it can’t quite match up to the same all-round audio performance as those two.

You can tweak the EQ yourself via the iCUE app, which also allows you to colour the titular RGB LEDs on the ear cups, but while there is a Bass Boost profile that just beefs up the low-end, it does so without improving clarity. With the boost enabled you do get more thumping ‘splodes in-game but the audio becomes more muddied.

In the end it just leaves the Corsair Virtuoso sounding a little lacking, but purely only in comparison to a pair of generally more expensive wireless gaming headsets. Which means that, in spite of Corsairs attempts to deliver a premium headset, it still almost comes out as the value option of the three of them. That said, the Thresher is an incredible price in the UK right now, even undercutting the Virtuoso…

If you were to just listen to it in isolation, you would enjoy the clarity with which you can pick out speech, the whistle of bullets flying past your ears, the screams of “Medic!” from the dying on Wake Island in BF5. It’s just the rumbling bass won’t quite lift you off your feet and dump you back down in a bomb crater as it might with either the SteelSeries or Razer headsets.

One of the best-sounding Corsair headsets, with stunning build quality, and robust wireless technology. But it just misses out on its more audiophile target with a slight lack at the low end.