Call yourself a CS:GO fan, do you? Huh. That’s interesting, because the fact you’re not dressed from head to toe in licensed clothing inspired by popular in-game weapon skins tells a very different story. No, it’s cool. I’m sure you’re still really good at it.

All about noscopes and ‘nades? Check out the 15 best first-person shooters on PC.

Wearing a waterproof jacket bearing the design of your favourite weapon skin might seem like a reasonably niche sartorial proposition, but over 14,000 people have voted on the below design, so what do I know? 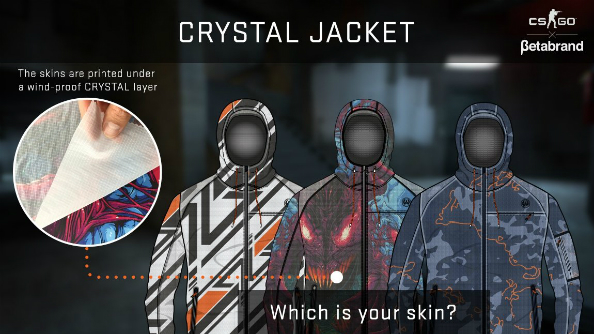 There’s no word on pricing yet, while the line’s still in its voting stage. It’s certainly a new take on traditional videogame merch, though it’s unclear whether it’s intended to pull in a new audience who previously wouldn’t have worn the usual XXL black tees with game logos emblazoned on the front, or give those who were previously happy with such offerings a wider choice of garb.

Just when I thought I’d got my head around CS:GO, with its $2000 weapon skins and Darude sound pack, this happens. It’s the gift that keeps on giving, isn’t it?

Would you walk down the street in a chicken shirt? Let us know in the comments below.