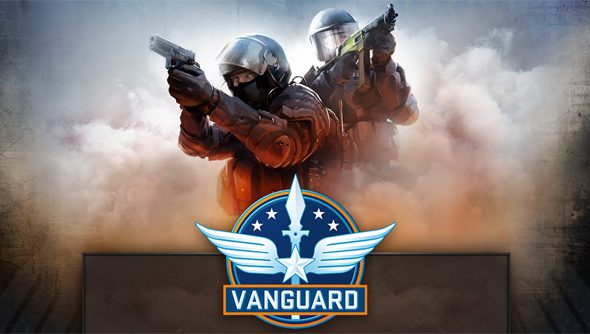 Operation Vanguard is the latest in a lengthy line of community initiatives Valve have run for Counter-Strike: Global Offensive over the last year and a half. In now-established fashion, players can pay for temporary access to six of the game’s best community maps on Valve’s dedicated servers – and the mappers will receive a cut of the profits.

New this time are operation campaigns: a progression system that strings together mission objectives in one of the best first-person shooters on PC and rewards players with extra cases or weapon drops.

A ‘mission’ in CS:GO constitutes a set goal an individual player will work towards over a series of matches. They’re assigned at the beginning of an operation, and expire at its end if uncompleted.

A finished mission in Vanguard will yield an operation case drop, or a random drop from an existing weapon collection. The Vanguard case brings together 14 of the top-rated community weapon finishes.

The idea is that you’ll complete a sequence of missions as part of a campaign, to earn challenge stars and upgrade your Operation Vanguard coin – the stats-page-cum-status-symbol players of previous operations will be familiar with.

Players can track their performance in official competitive matches on Vanguard and Active Duty maps during the operation.

The six community maps on show in competitive, casual and deathmatch modes for the next three months are Backalley, Bazaar, Facade, Marquis, Season and Workout. Between them, the maps cover Parisian urbanity, gleaming white sports facilities and a Japanese bio-research building.

A $5.99 access pass automatically entitles you to two missions per week until February 10 – one each from the operation’s two campaigns. But there’s the option to take on more weekly missions that will “send you farther across the globe”.

Outside of the operation, Arms Race has been overhauled with new rules and three maps previously restricted to Demolition mode. Time for confession: are you into weapon progression?