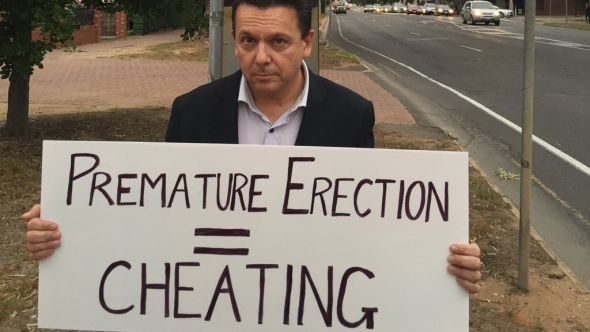 The CS:GO gambling crisis spirals ever further from Twitch and YouTube as governments finally start to get involved. In Australia, senator Nick Xenophon, pictured above, has begun to call for laws to be re-examined and necessary changes be made to protect young people from the dangers of gambling. This could include going so far as to ban the sale of goods that produce random results – skin crates, for example.

Stick to just playing the best FPS games, rather than gambling their cosmetics away.

According to Australian newspaper the Sunday Morning Herald, Xenophon called skin gambling and selling “insidious” and accused the game of “morphing into full-on gambling and that itself is incredibly misleading and deceptive.”

He says that young Australians are graduating from simply playing CS:GO to gambling on it, both with in-game skins and cash, and costing themselves or their parents a lot of money. The related legislation, at least in Australia, is from 2001 and Xenophon says that it “may as well be 150 years old in terms of dealing with these issues.”

His objective isn’t to ban the game entirely or anything so extreme, however. He simply wants laws in place that prevent underage gambling more effectively. According to the Herald, this could include warnings of gambling content, stricter minimum age requirements or even, as mentioned, a total ban on random-chance purchases like skin crates.

This could majorly affect other games – particularly digital card games that support a secondary market, giving individual cards more monetary worth. The lack of card trading in Hearthstone could save it, but the packs still have a random value in dust. It’s possible the non-random nature of Blizzard’s Legendary opening system could work in their favour here.

There is already some legislation in place that should be preventing much of what is going on but it goes unenforced due to the complexities of international law and lack of familiarity with online gaming. Essentially, enforcers can’t keep up with the exponential growth of CS:GO, eSports and gambling.