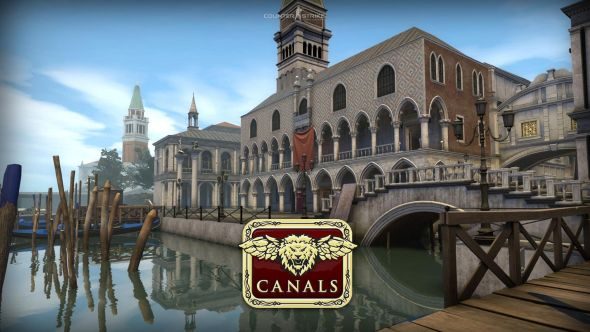 As is their style, Valve have released a massive Counter-Strike: Global Offensive update rather out of the blue. In it is the Canals map, which has been teased for some time, and the Spectrum case, which contains another 17 weapon skins for players to earn, use and hopefully not gamble away. It’s all wrapped up in a new patch that tweaks various other bits.

Try the best FPS games on PC, you won’t regret it.

First up, Canals. Valve have an official preview along with a load of lovely environment shots. The (minimal) plot is it’s an Italian city under attack by terrorist group Phoenix – hence the update to those brands of model also in this patch. That means two bomb sites, one more open and one much more cramped. CT side is generally a rifling zone, while the T side of the map will reward shotguns, at least according to Valve.

Meanwhile the new gun skins include various brands of lurid rifles, submachine guns and pistols, along with particularly shiny knives. The whole lot, as well as early prices, are up on CSGOStash if you want a glimpse.

Finally the patch itself. There’s actually a fairly large set of balance changes to maps, as well as the usual round of bug fixes. Full patch notes over on the official site, and we’ll have a roundup in our CS:GO updates archive soon.