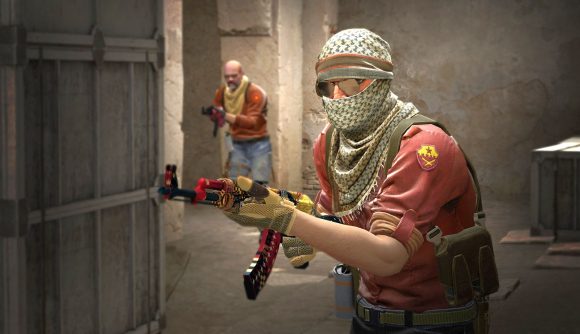 A new Counter-Strike: Global Offensive update has dropped, which ushers in a bunch of various map changes and addresses one of the FPS game’s ping-related bugs. The February 17 patch notes detail a pretty sizeable list of changes, including adjustments to Anubis, Engage, Apollo, and Frostbite, alongside a fix that stops pings from highlighting players.

“Pings no longer highlight players,” developer Valve announces in the notes, explaining that this “eliminates any instances of being able to reveal a hidden enemy”. It seems this fix addresses a hiccup recently spotted by the multiplayer game’s community, which would let pings reveal an opposing player hiding behind a corner if approached in a certain way – that is, pinged when standing right at the corner. The marker could show their location even before you had seen them.

Alongside this, the new patch brings a few other minor bug fixes which caused “the incorrect footstep sounds to be played on some surfaces”, “short-handed bonus being given in Guardian mode”, and a “visual shuffle” which was showing up in post-match map votes.

Additionally, some of CS:GO’s maps get some attention in the update, with Operation Broken Fang’s Frostbite receiving the most tweaks. The community-made map sees window glass removed from buildings to “improve gameplay” and fixes for an “exploit in Town”, some visual errors and stuck spots, and “floating exploding barrel/turret spawns”. Yikes.

Anubis’ signs and information boards get some re-skins, grenade clips, and wallbang fixes, too, while Engage’s boost spots have been removed and visual issues fixed. Apollo has had “multiple exploits”, clipping issues, and boosts sorted out based on player feedback.

You can find the February 17 CS:GO patch notes on the game’s site here if you’re keen to check out the full rundown for yourself.