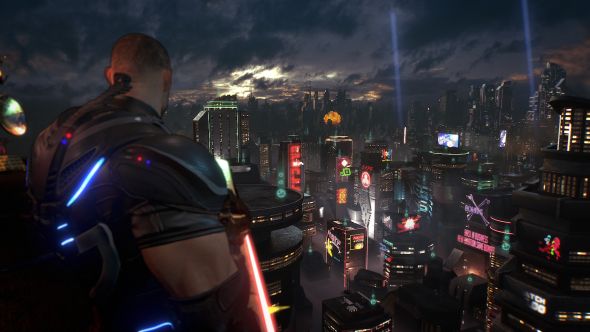 After the cancellation of Scalebound, there’s been some worry online about the status of Crackdown 3, of which we’ve seen very little recently. Both Microsoft and a reputable industry insider have now said that the game is still on schedule.

Review the most exciting upcoming PC games to see who’s bringing you the goods this year.

We reached out to Microsoft for an update on Crackdown 3, and received the following from a spokesperson:

“As mentioned yesterday, ‘Crackdown 3’ is not affected and still on track. We look forward to delivering a high-quality experience to gamers and will share more in the coming months.”

We can probably expect something at E3, if not before. This follows a report from Shinobi602, the enigmatic games industry insider who often comes up with accurate rumours, leaks and other tips.

Also asked around a bit and Crackdown 3 is safe, coming along fine.

Development was rough but all game development is to be fair.

Shinobi had initially feared for Crackdown 3, saying “I’ve heard Crackdown isn’t going too hot either, though nothing as bad as [Scalebound]” in a post on NeoGAF. However, it looks like there’s no cause for concern.

This is reassuring to hear, since it’s been some time since we heard anything of Crackdown 3. It was first announced at Microsoft’s conference at E3 2014 and was once slated to release in summer last year. It has since been delayed to this year’s holiday season “or earlier”, according to Microsoft Studios art director Dave Johnson (thanks toGamespotfor spotting this on a livestream). Not only that, but itwasn’t even shown at E3last year – around its initial launch date.

Crackdown is a series of third-person open-world shooters conceived by David Jones, who also helped to make Grand Theft Auto and Lemmings. The first game released in 2007 for the Xbox 360, but Crackdown 3 will come to PC as a Play Anywhere title. In both previous games, the player character has been a super-powered ‘Agent’ working for Pacific City to take down its organised criminals.

Incidentally, it’s worth reading the rest of Shinobi’s post for his broader take on Microsoft’s line-up in the near future. After Scalebound’s cancellation, “I genuinely struggle to think of what surprises they could have at E3” he says. “What’s happening now is the exact opposite of what Xbox fans seemed to want out of a Phil Spencer leadership… they’re still coasting on announcements from 2013-2014 and in that time, games have been cancelled [and] multiple studios closed, including Lionhead.”