The new Vanguard and DeathStroke peripherals represent the gaming audio giant’s first foray into keyboards and mice, but they’ve chosen their sources of inspiration wisely.

While you’re waiting on the DeathStroke to hit stores check out the competition in our guide to the best gaming mice around.

Creative are still first and foremost an audio company, as evidenced by their impressive new gaming soundbar, the Sound BlasterX Katana, but have begun branching out into new markets with their first keyboard and mouse. But why now when the gaming peripheral market is so saturated?

Creative believe their fans want a top-to-bottom suit of Creative-created products. Benson Low, long-time marketing manager at Creative, explained that it’s something people have been asking of them for many years, but it’s been a question they’ve hitherto avoided answering. Now though they’re listening.

They’ve also been looking around the industry to see what works and what’s popular, and as such the single Vanguard gaming keyboard and DeathStroke gaming mouse represent what Creative see as the best peripherals possible. 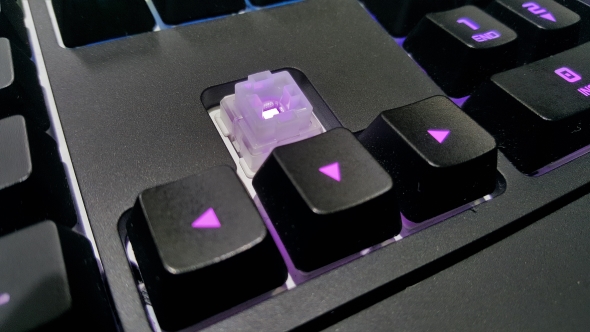 The Vanguard then is a mechanical keyboard, sporting Omron softkey switches, with a short 1.5mm actuation point almost in line with the latest Cherry MX Speed RGB Corsair use in their K70 Rapidfire board. And because gaming the Vanguard also comes with per-key illumination in now-standard full RGB LED trim. Like the Katana the illumination can be controlled by Creative’s Aurora Reactive software and linked up with other RGB LED-toting Creative products via their Connect application.

The Vanguard looks like a cross between the Razer Deathstalker and a Corsair K70, with its flattened base and the physical scrolling volume control. I’ve only had the chance to play with a prototype of the new board (you might notice the press image and my own pics have different layouts), but the Omron switches – also found in Logitech boards – felt responsive, if a little spongy when messing around in Trackmania. 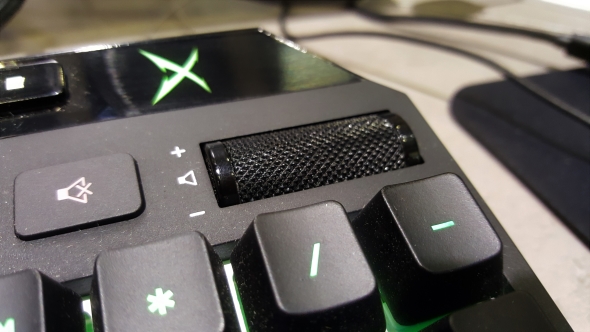 RGB illumination aside, it’s an unfussy board, with straight, clean lines and no over-the-top styling to try and make it stand out from the crowd. Creative is instead relying on its quality and the company’s name to give it the push it needs in such a competitive field.

There is a slight issue for any of the Vanguard’s potential UK-based fans though – when it launches this year there’s only going to be a version with either a US layout or one for German and Nordic languages. There isn’t going to be a Vanguard with a UK layout at launch unless Creative can get their manufacturers to play ball without forcing them to purchase a million (definitely not an exaggeration…) UK units up front. 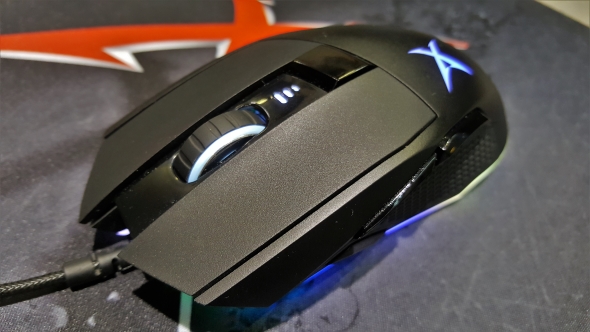 The DeathStroke gaming mouse will look pretty familiar too, from the new rodent’s name to its logo to the ergonomics it’s very obviously taking inspiration from gaming peripherals heavyweight, Razer. There’s also a touch of Corsair and Asus ROG gaming mice in there, with technical inspiration from Logitech too. Which is no bad thing considering the quality of their mice – Creative aren’t looking to reinvent the wheel with their new gaming products, they simply want to create the best keyboard and mouse they can. And imitation is the sincerest form of flattery, or so they say…

The DeathStroke is also using Omron switches and is packing in arguably the best optical mouse sensor that’s ever been made, the Pixart PMW 3366. That should give it the same accuracy that Logitech’s excellent G900 can offer and with the same super-high 12,000DPI maximum. 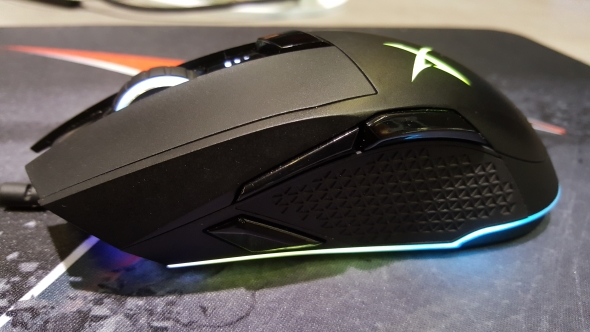 The two new gaming peripherals will find their way onto the shelves in the coming weeks though we are still waiting on final pricing. But if their inspiration in design follows through to their pricing we shouldn’t expect Creative to be offering either mouse or keyboard at a price anyone finds unexpected.