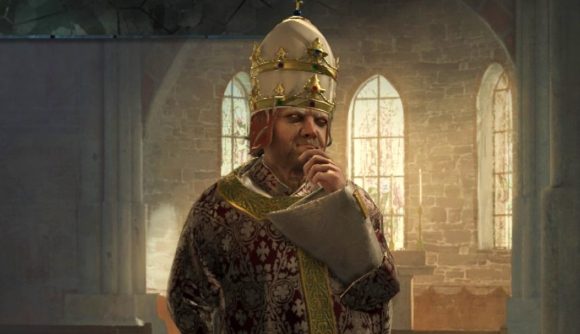 A new hotfix for Crusader Kings III has just dropped, fixing some of the medieval grand strategy game's most glaring fashion disaster (and dead children). Patch 1.4.2 addresses a number of known issues that arose from the recent release of the 1.4 ‘Azure’ patch a few weeks ago.

You can read the full patch notes for more information, but the important thing is this line entry; “Jester hat will be less fashionable after 1300 and thus, won't be used by the majority of characters anymore.” Finally, medieval fashion will make sense again. Custom characters will also now get starting men-at-arms in line with existing characters, and a fix for garrisons has been introduced as well.

Another game-changing fix involves dead children turning up during the newly introduced ‘Meet Peers’ event. This new interaction is a way in which you could facilitate your children forming early friendships with other important children, simulating the life-long bonds that could be forged between people who grew up together. These events always got a bit awkward though when that Duke’s kid who died of the plague a while back kept turning up. It’s hard to form a lasting friendship with a corpse.

As a result of the hotfix, the Steam multiplayer open beta for Crusader Kings III has been updated to version 1.4.3.

CK3 is currently working towards the next milestone update as well as its first major expansion – Royal Court. The Crusader Kings III DLC pack will add in a new visual throne room, complete with a ‘Hold Court’ event that will let you interact with supplicants seeking your favour.

It will also add in some premium interactions to go alongside the new culture overhaul that’s coming with the free patch, as well as bringing back personal inventories and artefacts your characters can equip.

At the time of writing, there is no release window for the Royal Court expansion, but we’re hoping it’ll be this year.