Players have been speculating about an updated version of Crusader Kings 2’s classic Game of Thrones mod since Crusader Kings 3 was announced. But, how about an entire rework set in an original fantasy universe with six years’ worth of lore, a TTRPG setting, and a Europa Universalis IV mod already under its potion belt?

That’s what modder and writer Jay10101 is planning to bring to the banquet table with Anbennar, a full CK3 conversion mod that adds elves, dwarves, and entire schools of magic to what we already have to refer to as ‘vanilla’ Crusader Kings 3. We’d ask them to slow down, but with mods that look as cool as Anbennar in the works, it’s hard to mind all that much.

Jay10101 describes Anbennar as a “collaborative world-building project”. It was originally a total conversion mod for EU4, but here it follows the same historical period as vanilla CK3. “In EU4 we explored what happens to a fantasy world in an age of gunpowder and reformation,” the modder says.”In CK3 we’ll deal with fantasy at its peak. Knights and magic, with all the undertones of political and dynastic intrigue.”

The creator lists Baldur’s Gate 3 setting Forgotten Realms, Dragon Age, and The Witcher as influences. Most impressively, Jay10101 promises that Anbennar for Crusader Kings 3 will build on the narrative already established in the Europa Universalis IV mod, saying that players will “get to live through the legends, tales, and origins of the stories you see in EU4”. 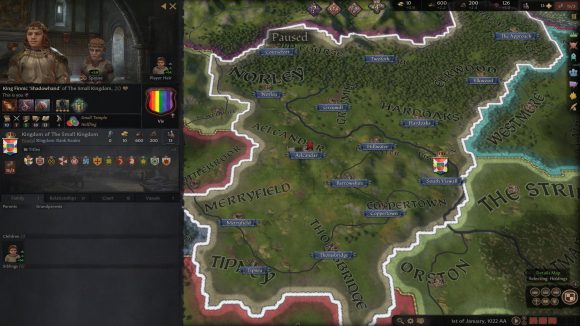 Planned features include the ability to play as elves, dwarves, and halflings. Players can also create a “magical bloodline through congenital magical aptitude traits” and “wield magic with a system inspired by classical D&D.” There’s a ton of really involved, in-depth lore on this Paradox Forums post, although no hint of a release date as yet. The mod team is also looking for folks to help with world-building, game design, and character modelling. Again, there’s a full list on the post.

If you’ve recently picked up Crusader Kings 3 on the strength of its already thriving mod scene – and who could blame you – don’t forget to check out our Crusader Kings 3 beginner’s guide. We’ll have some more news on Anbennar as soon as we know anything, and until then, and you can always pretend that the religion you just formed is a secretive cabal of elvish sorcerers.