Creating a customised ruler was something Paradox rolled out pretty quickly after the launch of Crusader Kings II, and the studio is wasting no time putting the same functionality into its latest grand strategy magnum opus, Crusader Kings III.

Unlike last time – when it was a paid piece of DLC – the ruler designer’s latest incarnation is included in the free 1.2 patch which will release today. The new feature largely has the same functionality, although there have been a few changes and some omissions required in order to get it out sooner rather than later. We were given some early access to the new tool, and decided to have a play around with it. For science, you understand.

Firing up the custom designer is pretty simple – simply pick a start date, and then enter the expanded character select view. From there, you can choose anyone who is coded into the game at the start of that period, and then you can replace them with a character of your own design. There doesn’t seem to be any limit on how many characters you replace via this feature, and it’s worth noting that once you’ve replaced a character, you can’t undo it without exiting to the main menu and starting again.

Any new character you create will be the founding member of a brand new dynasty, and will only have a spouse and children (if you choose to generate them) to count on as immediate family. You can’t customise any of those – even if you replaced multiple characters with custom designs there’s no way to connect them pre-game, like you would in something like The Sims. This will create something of an initial challenge because you’ll lack wider dynastic support. 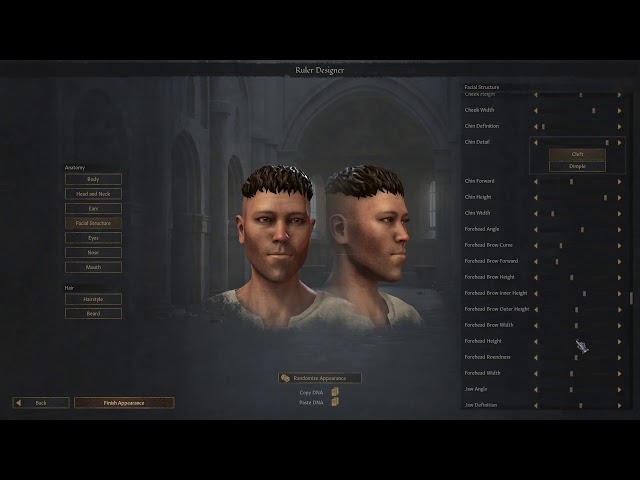 As an interesting aside, during some light testing I decided to replace Phillipe as King of France with a throw-away custom design. After starting the game and doing some digging, I found that Phillipe was still in the game, just as a landless character bumming around the French countryside. His dynasty and familial connections were all intact, he was simply no longer king. Further to that, he didn’t have any claims or any specific negative modifiers that would indicate he ever was King of France.

About the only immediate impact I could detect from inserting a custom character into the shoes of an historical contemporary was that your vassals will carry an additional short reign penalty, but it warrants further testing. 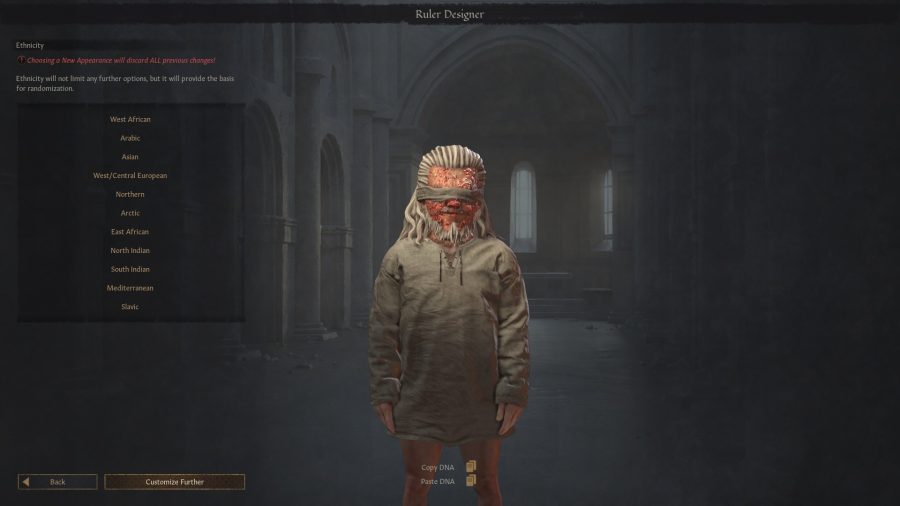 When it comes to designing your own character, it’s pretty straightforward. The realm and rank is decided by who you choose to replace, and while the title itself can’t be renamed you can randomise the realm flag, as well as that of your own dynastic heraldry. Creating custom heraldry is, sadly, one of the sacrificed features from the CK2 version – the devs had to put it to one side in order to make sure the core features would be ready in time.

More like this: Check out our CK3 faith guide

You can choose a character’s sex, sexual orientation, religion (from any faith that’s present in CK3), culture, and of course customise their appearance, none of which has any gameplay benefits or consequences. Gameplay-related customisation gets its own separate section, which is where the balancing comes in.

A fundamental change from CK2 is that age is no longer used as a balancing factor, under which your character’s starting age increased as you gave them better traits. Instead, every choice you make about your character’s in-game capabilities will either add or subtract points, and if you go over 400 points, your new game will no longer be eligible for achievements. 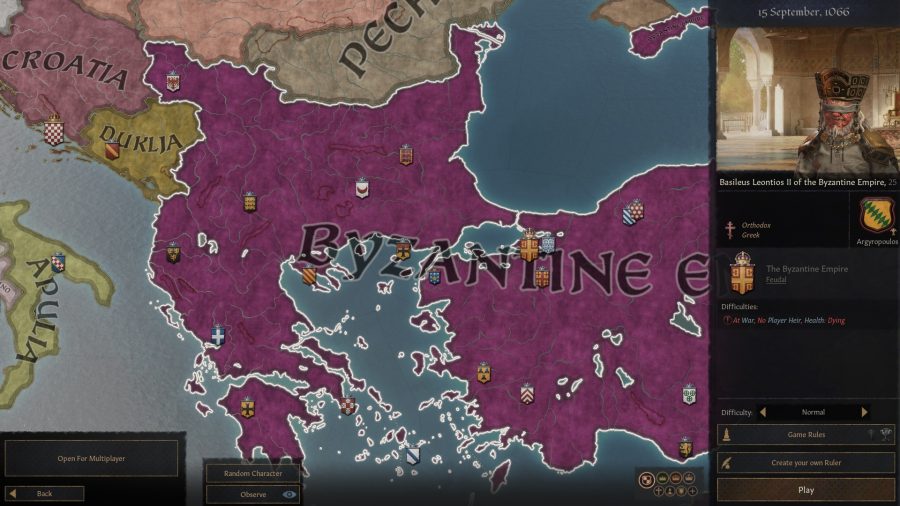 This is the only hard restriction, but age still has a role to play in that the points system recognises its value. A character’s points will increase until the age of 28, after which their points will decline, but gradually at first – there are only a couple of points’ worth of difference across the entire range of 22-30. Turns out even CK3 recognises this is the prime of life.

Along with age, you get to fiddle with pretty much every other gameplay trait you’ve always wanted your characters to earn or inherit. These include education modifiers, personality traits, an ‘other’ category in which you’ll find congenial traits, status traits and, well, whatever isn’t related to personality or education, really. With their points cost attached, it really is like a menu or shopping list of qualities. There’s even a weight slider, and your character’s age/weight combo will actually determine your character’s eligibility for certain physical traits, as well as their health.

You can put points into each of the six skills, and then finally you can tick a box to determine if your character is married, and how many sons and daughters you want to generate for them. As mentioned above, you can’t customise your spouse or children, though per CK3’s genetic visual tech, you can expect the latter to look very similar to their parents. 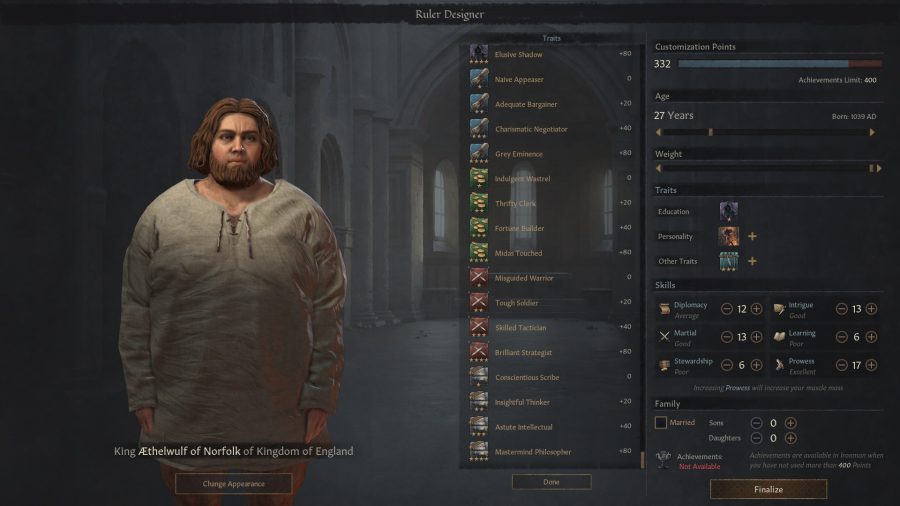 The fact that the ruler designer is free is definitely welcome news, as it didn’t get the greatest reception in 2012 when the CK2 version was released for a price. So much so, in fact, that the mod scene spawned several ‘free’ variants of the same idea. There were even mods to ‘unlock’ the CK2 ruler designer to remove the restrictions, which partly inspired the new approach to balancing.

Being able to simply and effectively replace whoever you want across either start date means you can create and populate your own medieval drama, right out of the gate. But without further tools to connect your characters to one another in some meaningful, or at least user-defined, way, it’s all just headcanon. It’ll take several generations to weave your new characters into the rich Medieval tapestry that makes CK3 so very special. To be the best version of itself, this character designer needs to enable said weaving before the game gets started.

Related: Check out our CK3 guide

So that’s something for Paradox to build upon with future (ideally free) content, but for the moment this is simply one of a few neat changes coming as part of the 1.2 patch. The update also includes a ‘kill list’, which you can use to track the people you’ve had killed via schemes, additional gameplay rules, UI and military changes, and a few other quality of life tweaks as well.