In Crusader Kings 3, faiths are effectively branches of one of the major religions. Each character in the world, and county on the map, belongs to a faith, which affects their interactions with you as a player character, and many, many other facets of CK3’s world.

Each faith is defined by a set of doctrines (more below) that have huge ramifications for those living under it. This can range from the personal, such as whether gluttony is considered a sin, to the geopolitical, such as how costly and easy it is to declare holy wars. Each faith also has a fervor value. This is affected by many events and choices, as well as the size of the faith itself, and determines the likelihood of heresy – other rulers and counties converting to other faiths with the same religion.

Faith is one of the most complex mechanics in CK3, and there’s a lot more to explain. That’s why we’ve assembled the following CK3 faith guide, covering everything from formation and tenets, to doctrines, sins, virtues, and converting other cultures..

How do you form your own faith in CK3?

The first thing you need to form your own CK3 faith is a huge stash of piety – the resource that represents your character’s virtue. There’s several ways to acquire large quantities of piety, but they do require some setting up. Remember that a new faith is for life, not just for whatever you just replaced Christmas with, so it’s often worth speccing out a specific character purely for the purposes of accruing as much piety as possible. This way, all your future descendants can benefit from the new faith. 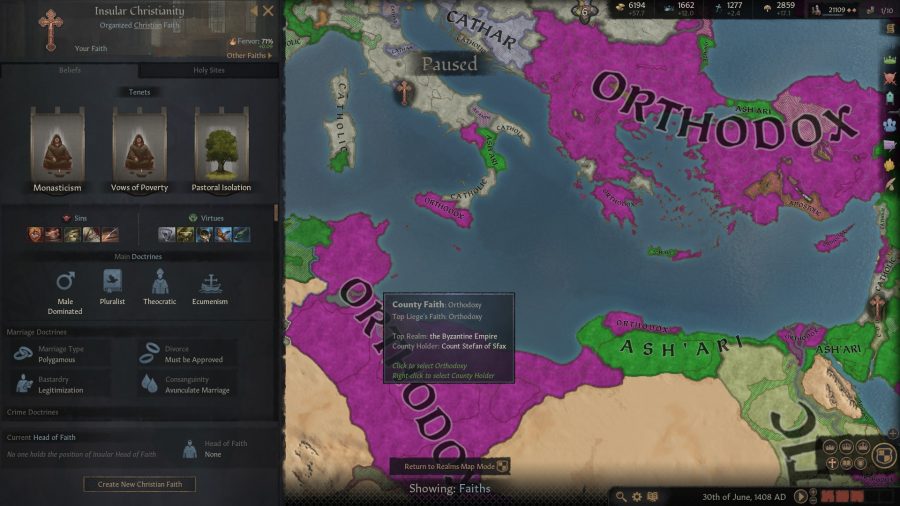 There are two major factors that affect piety income. The first is the learning stat of your character, which affects your regular piety gain. You can bump this up by setting your spouse to help with patronage from the council menu. Ensuring you have a realm priest with high learning and tasking them with religious relations also provides a separate, additional income.

The other major factor at play here are various percentage bonuses to that initial piety income. The Zealous trait is a big help here, granting a whopping 20% bonus. Pilgrimages, whenever possible, are also highly recommended. Not only do you get a huge piety haul for completing the event, you’ll also gain the Pilgrim trait, which grants another 10% bonus.

For yet another bonus, be sure to check which sites your religion considers holy. You’ll receive specific bonuses for each holy site that is currently part of your realm, and some of these include big piety bonuses. Holding Jerusalem as a Christian religion, for example, gives you a massive 20% increase.

Also important is how you spec out your character’s lifestyle. Since learning directly affects piety gain at a base rate of 1 learning to 0.1 piety, any traits that increase learning are obviously valuable. When it comes to choosing a focus, though, you’ll want to go with Theology, since the 1.0 piety gain a month is by far the most useful. Aside from this, try to fill out the entire Theologian skill tree for some massive bonuses down the line.

Be extra certain to grab the Prophet perk from the Theologian skill tree, as this grants a 50% discount on the piety needed to create or reform your own faith.

Finally, remember to choose carefully in any events to do with your faith, including stress-related events that have the potential to give your character traits that your current faith considers sinful. Sins are great fun, obviously, but they’ll get in the way of creating your own piety-hoarding mecha-jesus eventually.

Once you’ve accrued a decent amount of piety, it’s time to start forming your faith. In the bottom right hand on the screen, to the right of your character avatar, you’ll see three tabs. Open the one in the middle, then choose the option at the bottom of this new tab that reads “Create new [your religion] faith.”

It’s now time to get this potentially blasphemous party started. 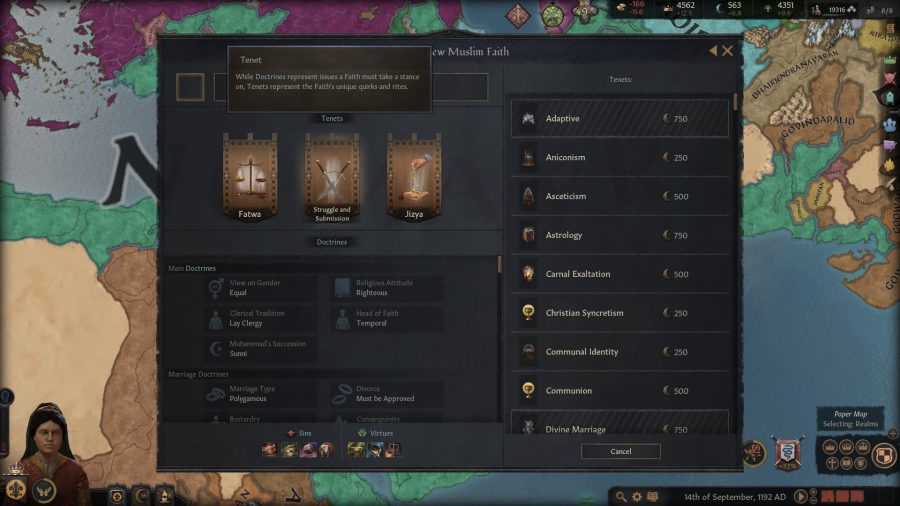 What are tenets in CK3?

Crusader Kings 3 describes tenets like this: “While doctrines represent issues a faith must take stance on, tenets represent the faith’s unique quirks and rites.” Basically, they’re the special sauce in your faith fajita, holy hot dog, or pious panini.

Tenets have a huge range of different effects. Some change the character traits that your faith considers sins and virtues, affecting how certain other characters will react to them. Some grant specific bonuses, like reduced build time for religious buildings. Some allow members of the faith to serve as knights, and some make eating human flesh a virtue. Shop around, as they say.

Note that not every religion has access to every tenet. While you can create a new faith within a religion, you cannot start a new religion itself. So, when you’re deciding which character to play at the start of a game, and you’ve got a specific plan for what tenets you’d like to adopt down the road, choose carefully.

How do you choose your own tenets?

In the top left of the ‘form new faith’ tab, you’ll see three flag-type images with headers, under the name ‘tenets’. Simply click on any one of these flags to bring up a full, alphabetical list of available tenets on the right hand side. Each of these tenets has an associated piety cost, which will be added to the total piety required to form your own faith. Needles to say, this can get pretty expensive, but you can’t put a price on holy naked cannibalism. 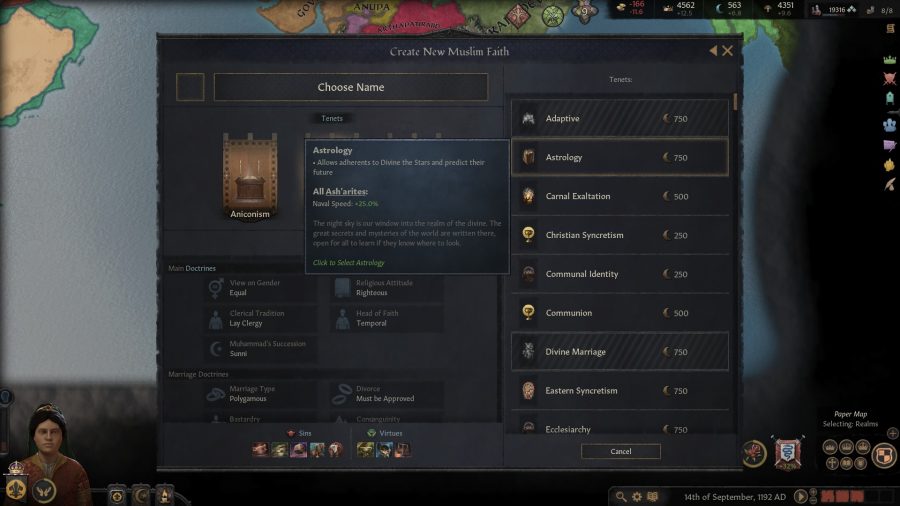 What are doctrines in CK3?

CK3 doctrines are effectively the religious laws that govern your realm. Remember that religion and faith is a fundamental part of how your realm is run, so the doctrines you choose could potentially have huge ramifications for your playthrough. This can range from which of your children are eligible to become your heir, to whether you get a big smile and a thumbs up from your bishop when you decide to marry your cousin.

There are four categories of doctrines for each faith. These are main doctrines, marriage doctrines, crime doctrines, and clergy doctrines.

Main doctrines covers things like the faith’s view on gender, and their clerical traditions. Gender view is exceptionally important for the myriad CK3 succession laws, as it determines who you’re allowed to designate as your heir, or how your titles will be divided after your likely untimely demise. Clerical traditions are worth keeping an eye on, too, as it determines the sort of benefits you’ll receive from any temple holdings. Religious attitude is important if you’re planning on revoking lands from sinners. You’ll also be able to modify rules affecting how your head of faith works.

Marriage doctrines cover things like polygamy, incestuous marriage, legitimising bastards, and other such pursuits that make for a great hour of Game of Thrones but are highly likely to get you kicked out of Wetherspoons. So, if your druthers is brother or mother loving, this is where you want to look. It’s also worth noting how exceptionally powerful polygamy can be. Four potential spouses means four potential alliances, different options from which preferred spouse to choose for different overall strategies, and potentially a lot of children. Fill your boots, providing you haven’t already filled them with sick after reading that last paragraph. 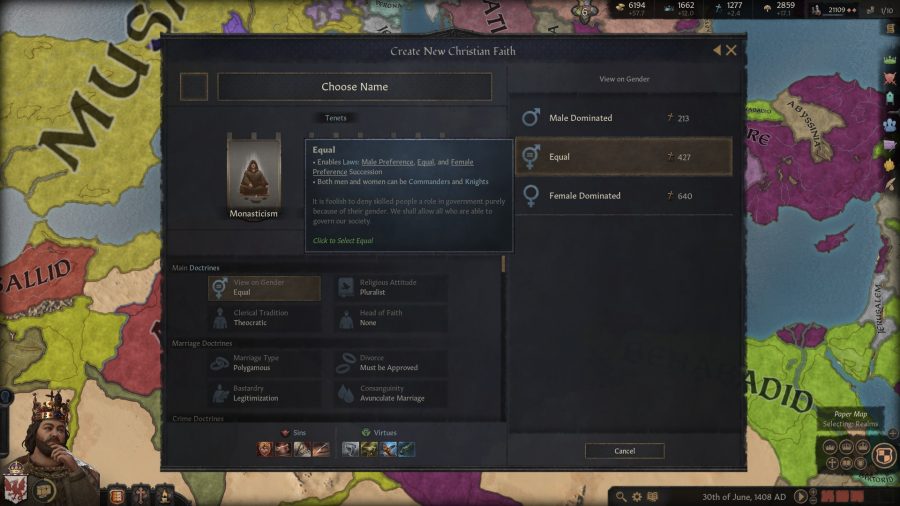 Crime doctrines cover which crimes are cool, and which crimes are still cool but not technically allowed. This covers larger concerns like kinslaying and same-sex relations, along with more specific things like witchcraft – which is really only going to come up in a few specific characters and event chains. Plan your laws around how you see your reign going. Kinslaying, especially, can become very relevant when you’re trying to succeed various family members in regards to titles.

Clergy doctrines cover the holy folk of your realm, gender equality, whether clerical appointments are for life, and so on. The most immediately significant of these is the ‘clerical function’ doctrine, as it concerns bonuses and penalties that affect the whole realm. You might also want to look into the ability to revoke realm priest status, in case someone better comes along.

How do you choose your own doctrines?

In the bottom left of the ‘form new faith’ tab, simply select any of the currently active doctrines. From here, you’ll see your options in the top right corner. Keep in mind that each religion has certain unique doctrines, as well as doctrines that can only be chosen under circumstances. Alongside this, choosing some doctrines and tenets disallows others. It’s also worth noting that each change in doctrine costs piety, which is added on to the base piety cost for forming a new faith in the first place. 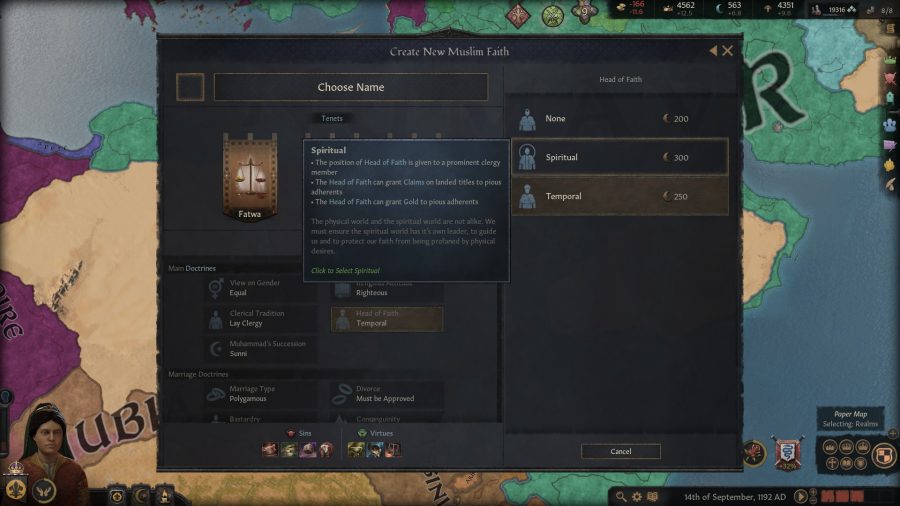 What are sins and virtues in CK3?

A faith’s sins and virtues are the character traits it considers sinful and virtuous. Characters with many virtuous traits will have an easier time accruing piety, and increased opinion from certain characters. For characters with sinful traits, the opposite is true. 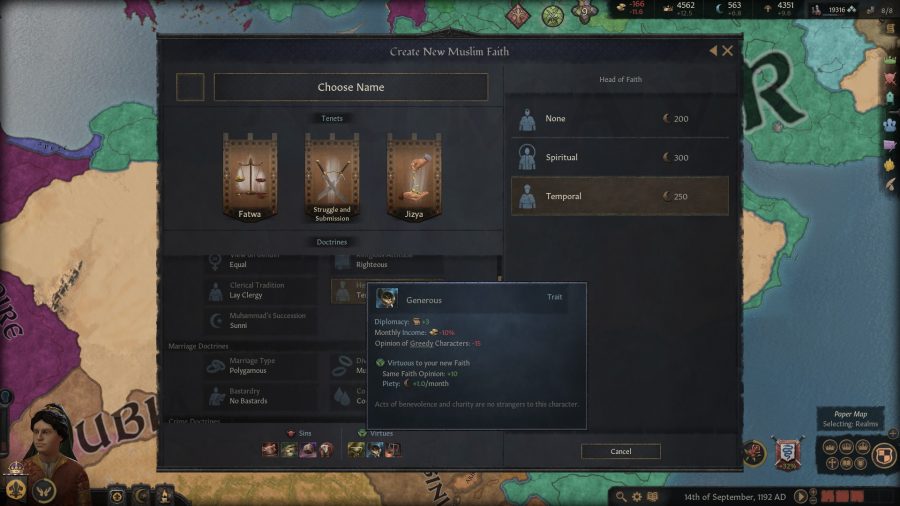 How do you choose your own sins and virtues?

When creating a new faith, you can’t actually directly choose which traits will be considered sins and virtues. Instead, these are a direct result of which tenets and doctrines you choose. For example, choosing the costly Hedonistic tenet as a Christian faith will make the usually sinful trait Gluttony a virtue, and the usually virtuous trait Temperate a sin. 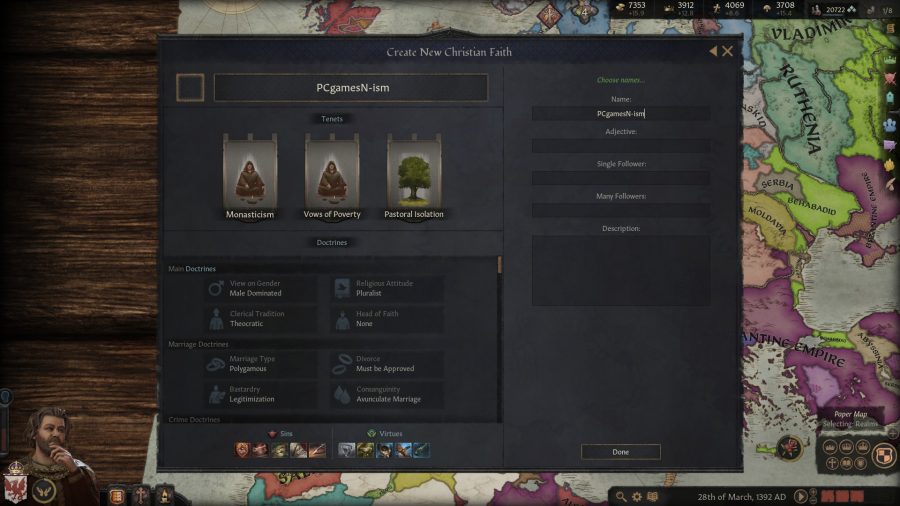 Choosing a name, and converting the world

Once you’ve selected your tenets and doctrines, and tallied up the piety cost, all that’s left to do is choose a name, an adjective, some plurals, and a description, and you’re good to go!

Cruise-ade on over to these CK3 guides:
Crusader Kings 3 beginner’s guide
The best CK3 mods
Guide to CK3 character creation

One other thing to keep in mind is how other faiths that are part of your religion will view your new faith, which is something the ‘create faith’ tab will tell you as you’re choosing doctrines and tenets. It’ll also let you know how many vassals, and whether your close family, will covert alongside you. Don’t mind all this too much though, it’s nothing a good old fashioned holy war against your former friends and relatives won’t sort out.