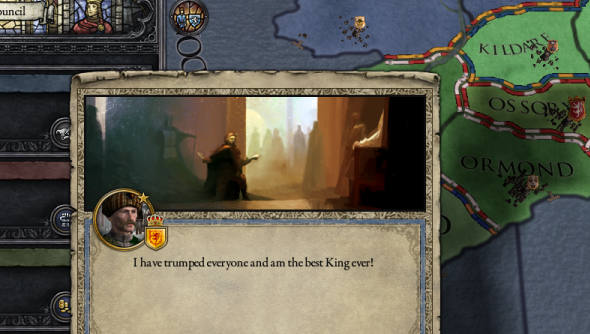 With more than one million sales, Crusader Kings 2 has just become the most commercially successful strategy game that Paradox Development Studio have ever produced.

Nobody could be more proud, or more surprised, than designer Henrik Fahraeus. He just set out to design a feudal strategy game. What he ended up creating was a phenomenon.

Crusader Kings 2 became a breakout hit because of its emergent narratives. It’s a story-creation engine. Most of the time, those stories are familiar tales of Byzantine court intrigue (and with one of its many expansions, you can literally take part in Byzantine court intrigue). Scheming nobles, faithless lovers, inconvenient bastards, and unworthy heirs all take their turn on the stage.

But Crusader Kings also contains some truly weird threads in its medieval tapestry, like the arrival of legendary warrior-saints and pagan witches. When those two things happen at once, as they did in this mind-boggling playthrough, things can get truly messed-up.

It’s the volatility, and the crazed chains of events that result from them, that convince people that they have to play Crusader Kings 2. But it wouldn’t be interesting enough to keep those players transfixed for hundreds of hours if it were just a choose-your-own-adventure, and Crusader Kings never would have gotten off the ground if it failed to satisfy Paradox’s core constituency of strategy fans.

“Initially, [the audience] was probably our usual fans. Our Europa Universalis people who got into Crusader Kings 2. And I think it’s still the biggest part of the players: the strategy game players,” Fahraeus said. “But there’s a significant minority of role-players, or Sims fans, if you will.”

It’s that second group of players that have helped drive Crusader Kings sales. Strategy fans showed up for a detailed medieval strategy game, but slowly word started to get out that it was also something of a roguelike for wannabe courtiers.

“It’s kind of the part of the game that has generated the most buzz. I don’t know. It’s part of what the game has become known for,” Fahraeus said. “The emergent narrative, and the crazy situations that arise out of the game.”

The more people who gave CK2 a chance, the more stories that propagated through forums and YouTube videos. The game turned into a golden goose.

“It has a very strange sales curve, this game. It’s starting to peter out a bit now, but from release it’s basically been a linear curve,” Fahraeus said. “It keeps selling at a fairly constant pace. Without really dropping off much. That’s kind of weird. We’ve never seen that in a game before. That definitely caught us off guard.”

In fact, people love the role-playing aspect of Crusader Kings 2 so much that Fahraeus sometimes suspects he screwed up by spending so much time trying to make it a good strategy game.

“I probably spent too much time thinking about and designing the other features of the game, which people don’t find very interesting, although they’re fairly complex,” he said. “It was probably a mistake putting so much time into that. The same goes for the technology system, and the laws that are in the game. I kind of chased some red herrings trying to cater to the old historical strategy game crowd.

“I should, in hindsight, have spent more time trying to develop the emergent narrative. If I could redo something, It would probably be that.”

A cast of thousands

Perhaps that’s true, though it probably undersells the role the strategy game plays in making Crusader Kings 2 so fascinating. It is a game with thousands of independent AI actors, and your character is just one among many would-be social climbers. That interplay between military conquest, dynastic strategy, and the characters’ own quirks and foibles is what makes CK2 entirely unpredictable. You’re not just waiting for more exciting events to pop up randomly. They’re happening as a result of all these medieval weirdos running around trying to fulfill their personal and political ambitions, all at once, by any means necessary.

Fahraeus knows this. While there’s a bottomless appetite for more events and stories, “The game still needs this backdrop of medieval politics. And it can’t be too simplistic. I think it definitely helps that you can conquer countries by force, raise levies, and all that kind of stuff.”

For the upcoming Charlemagne expansion, however, Fahraeus is trying to give the people what they want. The life and times of Charlemagne are perfect fodder for a raft of new events to help players re-create the rise of the first great medieval empire.

“Part of the appeal of that expansion is going to be a little bit more storytelling,” he said. “I think we’ll have a few more railroaded events for Charlemagne himself, telling the story of his life, and we’re also going to have the chronicle, which is in the style of a medieval chronicle, which tells your story and the story of your dynasty as you go along.”

But perhaps the most exciting thing about CK2’s success is that it’s opened Paradox to tons of new possibilities and scenarios that are traditionally difficult to do justice in a strategy game.

“When I started at Paradox, we kind of intended to cover the history of the world with our games. We kind of stopped that, it’s no longer our ambition,” Fahraeus said. “But a proper Dark Ages game, or returning to the Roman era, or the Ancient era, would be awesome. And that’s just historical games where I could see many Crusader Kings mechanics working.”

It’s a smart direction for Paradox. Even some of their best games, like the brilliant Europa Universalis IV, can be hard for people to relate to and understand. But Crusader Kings’ great triumph was to capture all the grandeur of historical strategy, and reduce it to a relatable, human scale.