Just how important are the aesthetics of your gaming rig to you? If the answer ranges between ‘very’ and ‘cut-my-hands-off vital’ then Cyberpower’s Hyper Liquid range might just be perfect for you. If you’re more about raw gaming performance though… not so much.

Want to get the most out of your own rig without spending one red cent? Check out our simple overclocking guide.

The Hyper Liquid machines are part of Cyberpower’s exclusive series of custom built PCs. They’re not yet available in the US, but we’ve heard tell that once specs have been nailed down these colourful rigs will make their way Stateside too. They’ve been designed to take liquid cooling to the extreme, using high-performance parts and hyper colour coolant to create gaming PCs to stand out from the myriad machines available elsewhere.

There are seven different base specs in the range, with different customisable component choices for each. Starting at £1,115, for an AMD Athlon powered rig, and stretching up to a transforming £8,000 ten-core machine with a pair of GTX 1080s chilling inside, the Hyper Liquid machines cover a real spread of components.

Today we’re looking at the Cyberpower Hyper Liquid 700, a £2,999 PC with possibly one of the cleanest, most beautiful builds I’ve ever tested.

If you’re after the HL700’s performance numbers, or just want to get right to the final verdict, click on the quick links below. 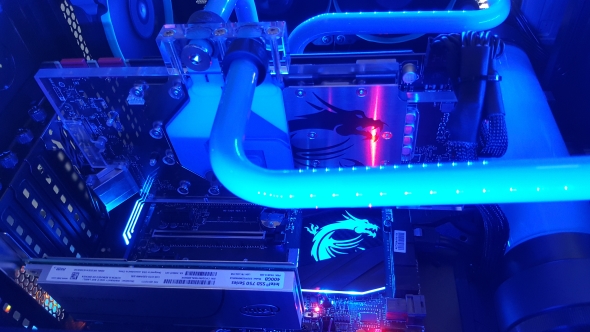 The HL 700 has a pretty balanced specification, not being heavily weighted one way or the other. That does mean maybe it’s not the ideal dedicated gaming rig, but does mean it’s potentially a little more versatile than a GPU-heavy PC might be.

Cyberpower have used the X99 platform as the base of the HL 700, with a quite lovely MSI X99A Gaming Pro Carbon motherboard as its foundation. That’s a quality ATX board, and one which fits in with the multi-coloured Hyper Liquid aesthetic as each of its myriad LEDs can be tuned using MSI software to display any RGB tone you like. And if you’re into your strobing, blinking PC innards then you can have them flashing away like a sweaty 90s disco in no time.

Or you could just match the colour with the silky opaque coolant Cyberpower fill their cooling loops with. There are 12 different coloured coolants to choose from, with nine pastel shades, two UV and one vibrant red. With the pastel colouring Cyberpower have filled out our HL 700 sample with it looks like an upgraded control system from Willy Wonka’s Chocolate Factory. I keep half expecting to see Augustus Gloop’s bloated corpse swirling around in the reservoir.

Looped into the cooling system is the Broadwell-E Intel Core i7 6800K CPU, it’s a six-core chip with 12 threads and is the logical next step up from the i7 6700K silicon we see in most gaming rigs at the moment. As a more advanced chip it’s got a few more PCIe lanes sprouting out of the CPU itself, offering more capacity for PCIe-based SSDs. Though the HL 700 doesn’t have to worry about that as the Intel SSD 750 drive operating as the primary storage device is plumbed into the motherboard’s standard PCIe slots rather than the CPU-connected M.2 interface. 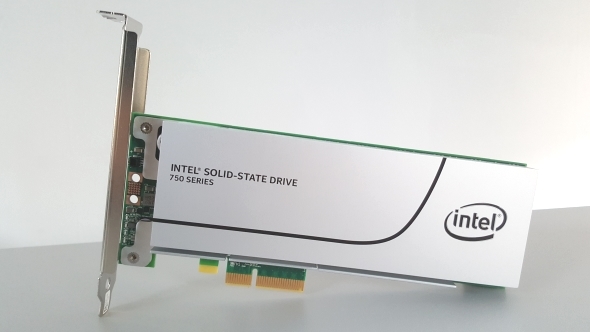 It’s also sporting an SSD for secondary storage too, with a slower Kingston SATA-based drive taking care of the extended capacity. The Intel drive is 400GB with the Kingston U400 a 480GB option, making for less than 1TB of total capacity, speedy though it is.

When it comes to gaming it’s the choice of graphics card which means the most to us, and here Cyberpower have used the MSI GTX 1070 SeaHawk EK X. It’s a pricey version of the GTX 1070 designed with an EK water block already in situ, just waiting to be plumbed into a full cooling loop.

Cyberpower have gone OP on the PSU and opted for a 1KW Corsair power supply. Despite the fact the machine seems to draw less than 450W in peak platform power draw that hefty PSU does still make sense. For one thing it allows for extra capacity should you choose to upgrade your machine later – though unplumbing that soggy component chilling loop is going to be tricksy – but it will also make your machine a little more efficient.

You don’t want your PSU to be just powerful enough to cope with the energy your rig requires as the PSU will actually run more efficiently, and likely quieter, when it’s operating well within its rated parameters. 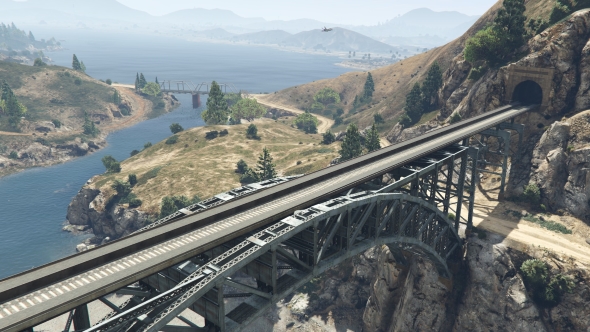 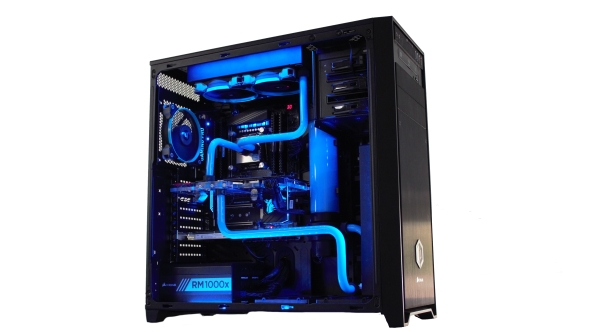 Sadly this is where things don’t look so good for this good-looking rig: in the performance stakes. The last couple of full builds we’ve tested were the DinoPC Raptor2 and the MSI Aegis X, at £3,800 and £2,000 respectively. At the HL 700’s ticket price of £2,999 it sits in the middle of these two machines in cost terms, but when it comes to gaming it’s very much bringing up the rear. The two grand MSI machine is still rocking a GTX 1080, and that is always going to deliver better gaming performance than a GPU from the next tier down. With the same graphics card the six-core i7 6800K would give the HL 700 the performance lead, but as it is it looks a little lethargic.

But the processor does offer some good news on the productivity front. The multi-threaded performance of the 6800K is excellent, as it gets all 12 threads attacking anything computationally intensive task you put in front of it. Unfortunately, even at this machine’s 4.1GHz overclocked frequency its single core performance is behind the latest 14nm Skylake chips. In storage terms, and most especially on the memory front, the twin pillars of Intel’s excellent SSD 750 drive and the quad-channel DDR4 make the HL 700 an incredibly responsive machine to use.

It’s also seriously cool and quiet too. The full cooling loop maintains a maximum CPU temperature of 57°C and a peak GPU temperature of just 52°C, and does all that without spinning up its many fans to anything like obtrusive levels. 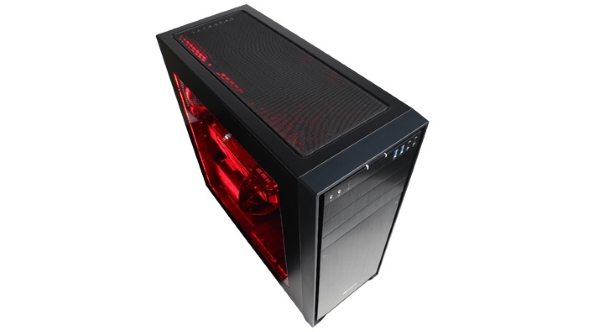 When I first looked at this build I automatically assumed for the £2,999 price you’d bag yourself a pair of GTX 1070 cards running in SLI – surely you wouldn’t spend that much cash on a machine with a single sub-£400 graphics card in it, would you? And this is the issue I’m really struggling with – for all the beautiful aesthetics of this super-clean, smartly-engineered build, it’s feels seriously lacking in the GPU department.

The decision to use the Intel SSD 750 and Core i7 6800K CPU is excellent, leading to a very nippy-feeling rig to use, making it a versatile machine for when you’re not just going to be gaming your life away. But for this much cash you want your PC to be able to breeze through any high-end, high-resolution game you throw its way, and while the GTX 1070 is a great card, it’s certainly not the pinnacle of gaming excellence. It ain’t no GTX Titan X…

If you did want to spec it out with a second GTX 1070 that pushes the price up to around the same level as the DinoPC Raptor2 I reviewed not so long back. And even with its twin GTX 1080s I found that was asking too hefty a price premium.

So the Cyberpower Hyper Liquid 700 feels very much like it’s a style-over-content PC. It may be a stunning-looking machine, but its high price and somewhat miserly GPU spec means it feels all too underpowered for the amount of money you’ll be dropping on it. If all you want is a stylish build then the Hyper Liquid range will certainly give you that, though if that’s not at the top of your PC priorities list you’re unlikely to be too enamoured with the price premium it costs to look this darned good.