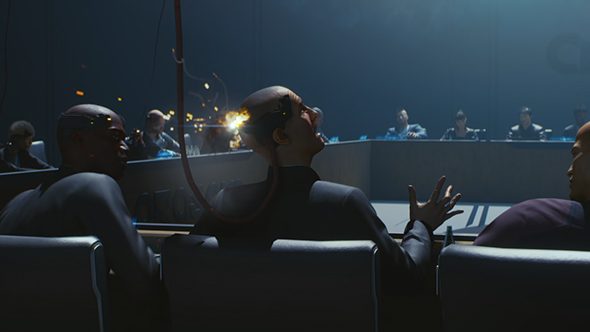 Cyberpunk 2077 will let you install plenty of cybernetic implants granting all kinds of specialised improvements and new abilities, just as you’d want from a game in this setting. But before you go dreaming about slowly transforming your rickety organic body into a near-complete cyborg, bear in mind that there may be consequences for those actions.

In the original Cyberpunk tabletop game, there’s a concept called cyberpsychosis, where installing too many cybernetic mods leads to a deteriorating mental state, all the way until you start suffering from violent psychosis. The resulting cyberpsychosis essentially drops all humanity, driven only by a murderous rage.

Yes, there are in fact games other than Cyberpunk 2077. Check out some of the biggest on our list of upcoming PC games.

Cyberpsychosis will be a part of Cyberpunk 2077’s story among the NPCs you meet, according to an interview with CD Projekt on Twitch. The developers haven’t yet decided whether you’ll be subject to those penalties yourself, though – maybe it’ll be a possibility, or maybe there’ll be a hard limit on those implants before you reach the point of no return.

It’s a hard limit even in the tabletop game, with GMs taking over for players who’ve been fully embraced by cyberpsychosis. Cyberpunk characters have an empathy stat, and installing new mods slowly decreases that stat. At an empathy of 3, you’re a bit on the cold side, and at 2, you’re distinctly difficult to be around. At 1, you’re prone to random violent outbursts. At 0, it’s full cyberpsychosis.

We’ll probably know more about how all this affects the player before the Cyberpunk 2077 release date rolls around, but we definitely saw plenty of people having a really bad time with technology during the reveal trailer.