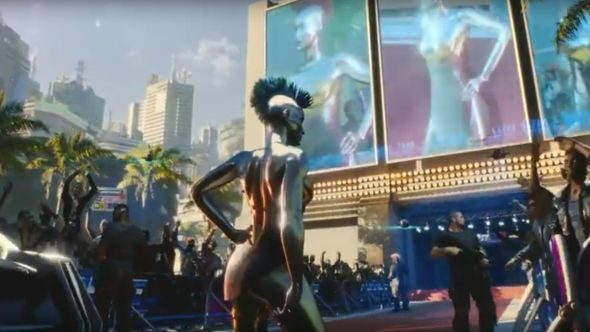 The soundtrack of Cyberpunk 2077 is performed by characters from the game’s lore. Information from a hands-off press demo at E3 2018 confirmed that characters who fans of the Cyberpunk tabletop games will recognise ‘perform’ some of the songs that players can hear as they travel around the game’s Night City setting.

According to a representative from developer CD Projekt Red, the direction of the soundtrack came from a desire “to draw on the lore of the rule book” from the tabletop game “when we were creating the world of Night City.”

Offering an example of this, the representative told those attending the demo that “the song you can hear in the background is being sung by Rockerboy Johnny Silverhand.” The rockerboys are a group of rebellious musicians whose music focuses around revolt and a distaste for authority – think 1980s punks, but 90 years after their time (several Rockerboys can likely be seen in the Cyberpunk 2077 trailer, based on their punk-esque clothing and hairstyles).

Johnny is a famous rockerboy with a cybernetic arm. He blames the loss of his real arm, as well as the death of many of his friends and family, on megacorporation Arasaka – rivals of another megacorporation featured in the game, Militech.

Johnny is also the ex-boyfriend of another Cyberpunk character, Alt Cunningham. Alt is a netrunner (one of the Cyberpunk classes, similar to a hacker), who invented a piece of technology capable of making digital copies of the mind of anyone using the internet. In the lore, the Arasaka corporation kidnaps alt, stealing and then weaponising her invention before using it against her. Alt survived as a digital ‘ghost’ that now occupies the Net, but Arasaka have since been able to use the technology against their opponents – something you seem to be able to see happening in the trailer.

The inclusion of Johnny Silverhand’s music tells us quite a lot about Cyberpunk 2077’s story – if not the story beats themselves, then at least some of the aspects of the lore that CDPR are drawing on. Johnny Silverhand is probably dead by the time 2077 rolls around (the first two tabletop games are set in 2013 and 2020, meaning he’d be pushing 80, and he doesn’t seem like the kind of character who’d die of old age) but his existence suggests that Alt and the Arasaka corporation could be important players in the story.