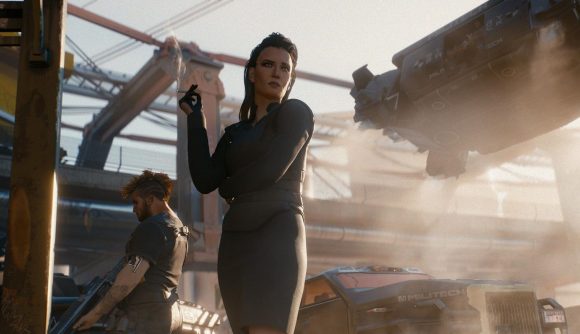 After CD Projekt revealed that Keanu Reeves will be playing a major role in Cyberpunk 2077, I felt that the game’s star power could grow no further. It would seem, however, that that’s not the case, and that the developer has its eye on someone arguably even more famous.

In an interview with Game Media, when asked which other Hollywood stars he’d like to see in the game, quest director Mateusz Tomaszkiewicz said that “I love Meryl Streep […] I love [The] Devil Wears Prada, and it would be great to have her as one of the characters in the game.”

Tomaszkiewicz already knows exactly what kind of role he’d have the triple Oscar-winning actress play. “She could be totally one of the big corporate characters in the game, I can picture this.” Streep has plenty of experience in that kind of role, thanks in no small part to her portrayal of Miranda Priestly in 2007’s The Devil Wears Prada, as well as Margaret Thatcher in 2012’s The Iron Lady.

Of course, Keanu’s likeness has been used in a number of games over the years, from the official Matrix tie-in to Fortnite’s John Wick event earlier this summer. Meryl Streep is yet to earn that particular honour, but given her apparent ability to play any role handed to her, if CDPR was to come knocking, I doubt it’d be much of an issue.

Reeves’ role in Cyberpunk 2077 is pretty significant. The actor, who plays Johnny Silverhand, is said to have more dialogue than any other NPC. On the off-chance that Streep also makes it to the game, her role would likely be significantly smaller, but I have no doubt that it’d be just as impactful.