Let’s get right to the point: Cyberpunk 2077 seems to have left the ‘punk’ at the door.

Now, I understand CD Projekt Red has spent a lot of money on this game, and was never going to promote it with a ramshackle roadside stall – ‘CYBERPUNK 2077’ daubed in sloppy black spray paint, the ‘E’ and ‘N’ swung backwards in rebellious illiteracy – but the more previews and gameplay videos I see, the less it feels like anything cyberpunk. Recently, this sense has peaked – it’s moved from ‘huh, that doesn’t seem very punk’ to ‘this is literally the opposite of Cyberpunk’.

Punk is about nonconformity and anti-authoritarianism. It’s DIY, it’s anti-consumerist, it’s anti corporate greed. It stands for taking direct action and not ever being a sell-out. Cyberpunk – the genre – twists these ideals around futuristic dystopian settings, in which individuality is about rebellion against state suppression, not merely looking cool. I’m not sure if a triple-A game could ever truly capture the essence of it, when self promotion and mass-market appeal fly in the face of punk’s ethos. But this game and its promotion seem to eschew everything its genre namesake is meant to signify.

There are many other exhibits of cyberpunk media that also fall short of the genre’s ideals, of course. Mainstream cyberpunk trades on Asian set dressing while rarely centring Asian stories, and has never been quite as diverse or welcoming to minority groups as punk itself. There’s also the fact that other companies have misused the label; high-end fashion designers routinely appropriate cyberpunk style at prices which don’t exactly scream grassroots political upheaval. 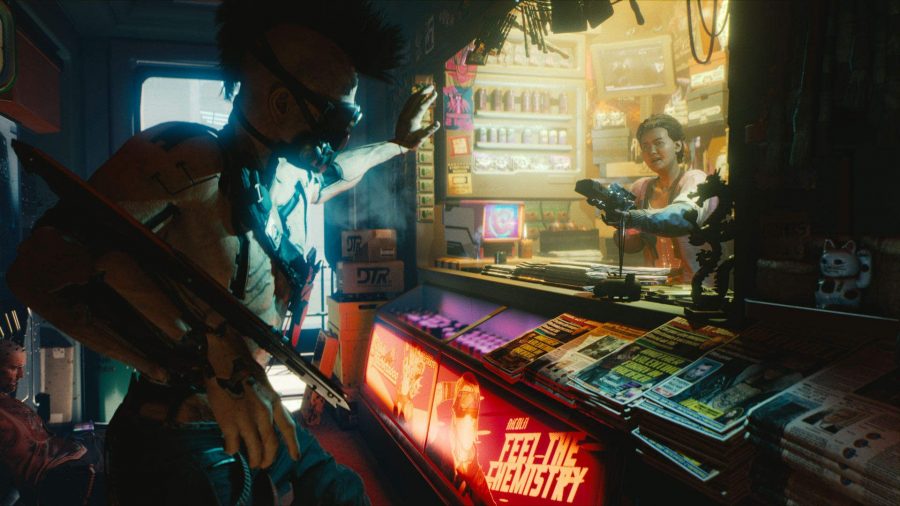 CDPR, however, has named its game after the genre (even though it was derived from the board game, the message remains the same). The studio hasn’t just told us ‘we’re inspired by cyberpunk imagery’; it’s nailed itself to the mast. It’s said: ‘we ARE this’. With the huge market share this game is sure to get, it will for some people become the definitive cyberpunk experience. Others may find themselves disappointed with the game treating cyberpunk like Lyle Lanley’s monorail: ‘cyber’ means ‘future’, and ‘punk’ means ‘thing’!

I don't blame a game studio for wanting to turn a profit. I blame it for claiming a label which opposes that very enterprise

CDPR has burned any anti-consumerist bridges by selling expensive jackets, caps, and headphones, as well as getting several streamers to promote its wares. It would be naive to think the studio wouldn’t want to see a return on its enormous investment, of course, but any notion of anti-corporatism crashed out the window when the game’s official Twitter became best mates with Elon Musk.

And nonconformity? Every version of player character V I’ve seen so far is just a bog-standard future person. I understand that there’s some superficial progress in the character creator. You can mix and match typically gendered voices, body parts, and genitalia in a way most games would lock you out of with a binary M/F gender system. This is, in isolation, inarguably a shuffle in the right direction. But will it live up to its potential? 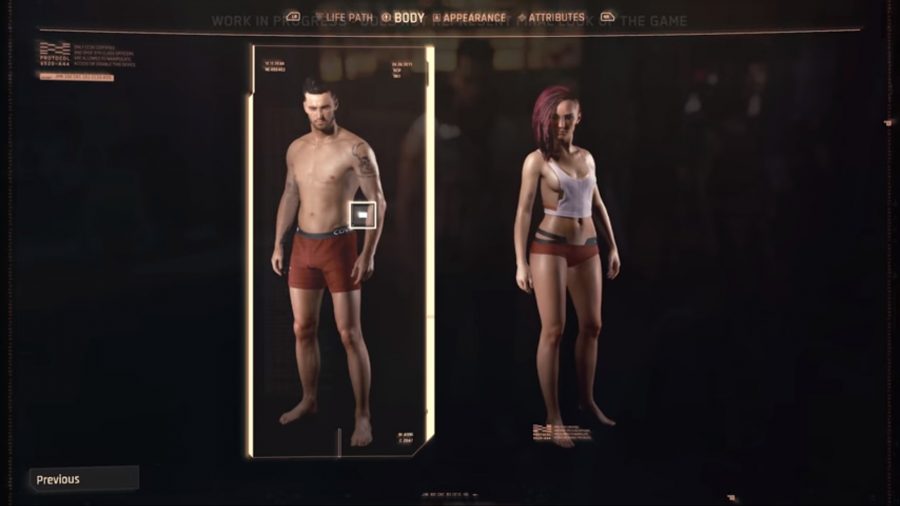 There’s so much that could be done with a character creator with a true punk edge, something that goes beyond the superficial to properly represent the experience of gender fluidity. Modern games are well versed in tapping into our emotions – usually fear, pain, or anger – and it’s not beyond the ability of CD Projekt Red’s talented team to explore gender on a deeper level. To give players an opportunity to not view gender and genitalia as accessories, but as something which influences narrative, which changes both how the character sees the world and how the world sees them. Something like that would truly defy convention, and make a real statement on how we build and define ourselves as humans. That would be truly cyberpunk.

Related: Check out these exciting upcoming games for PC

Especially when the gameplay footage we’ve seen so far shows V taking out their anger on the corrupt police state by whaling on the next people in the street who look at them funny. Punk isn’t just about being angry, it’s about channeling that anger into change. CDPR’s recent statement that diversity must not lead to conflict, which also minimises the issue of sexism in games culture and suggests that Silicon Valley is a great example of tolerance in business, compounds these fears. Not only is Silicon Valley infamously not diverse, it’s also perhaps the least punk place to work on the planet: an odd choice for a studio making a supposedly ‘punk’ game to idolise. 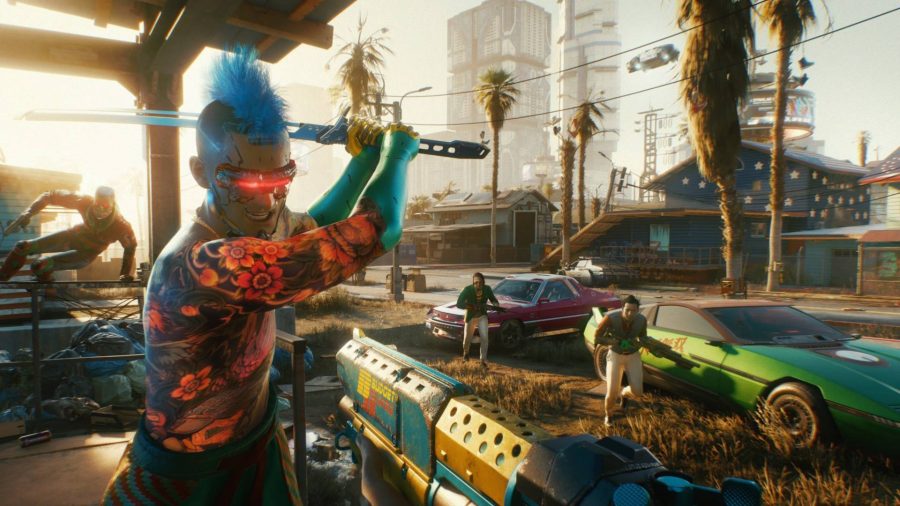 Science fiction has always been a harsh genre to minority groups. It’s a genre which takes the attitudes of the present into the future, painting a bleak reality for those who do not fit in. We frequently see female characters behave in a naive, childlike fashion while being sexualised by their design; Tron: Legacy and The Fifth Element being two of the strongest examples in cinema. Racism, too, is often present in the stereotypical features supplanted into alien races. Trans people, if present at all, are usually absorbed into the idea of ‘transhumanism’, as if installing cat eyes or a new cybernetic arm is the same as gender transition; nobody feels dysphoric because their eyes aren’t feline.

The cyberpunk genre is also bogged down by these issues, but recently we’ve seen trans positive cyberpunk fiction hitting the shelves, such as Ren Warom’s Escapology or Ann Leckie’s Provenance. From what I’ve seen so far, Cyberpunk 2077 feels, ironically, like it’s part of science fiction’s past, trading on surface-level representation – it’s as if the team is cosplaying as punk, interested only in the clout being a weirdo brings, but not in uplifting or understanding the weirdos themselves.

Ultimately, Cyberpunk 2077 appears to be a game that knows how cyberpunk looks, but not how it feels. It’s smashing guitars but doesn’t seem to understand why. None of this is to say it won’t still be a pretty great game, because let’s face it, ‘The Witcher in the future mixed with GTA’ is an absolutely cracking elevator pitch. And I don’t blame a massive studio for marketing its game or wanting to turn a profit. I blame it for claiming a label which opposes that very enterprise. Punk? Feels more like we’re being punk’d.

Stacey is a former English teacher and freelance games writer. Her words have appeared in IGN, Eurogamer, Polygon, Games Radar, the Washington Post, the Huffington Post, NME, and more.