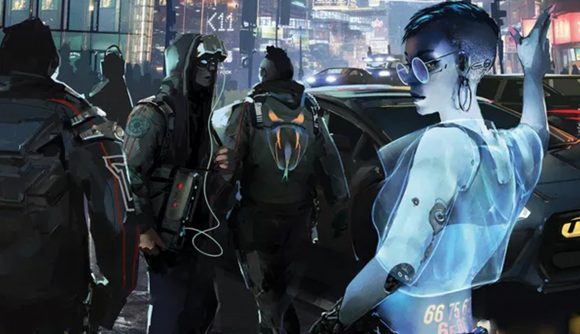 By now, you probably know that CD Projekt Red’s Cyberpunk 2077 is based on a tabletop RPG, and earlier this year we learned that the two products do indeed share a single timeline. But there’s a lot of space between Cyberpunk 2020 and 2077, and a lot of lore to run down there – which is why a new tabletop release is set to launch later this year.

Cyberpunk Red launches very soon, as the new edition’s Jumpstart Kick will go on sale on August 1 at GenCon and digital retailer DriveThruRPG, as Polygon details. This starter edition will include the basic ruleset (revised a bit from the original), a lore book detailing the updated world, and a set of customisable character templates.

This updated edition takes place sometime after both Cyberpunk 2020 and the 4th Corporate War, but before the events of the CD Projekt Red game. Publisher R. Talsorian has been working with the developer on a unified timeline for the digital and tabletop games – so far that Cyberpunk Red’s box art even features a CD Projekt logo.

Naturally, there’s been plenty of new interest in the original tabletop game, as R. Talsorian says that last year’s E3 brought a 400% increase in sales for Cyberpunk 2020, and there’s been a “steady flow of customers” since then.

You can find out more on Cyberpunk Red on the official site, or check out our guide to Cyberpunk 2077 lore for everything you need to know about the world and story so far.