Last month, Danganronpa: Trigger Happy Havoc’s developers Spike Chunsoft sent a cryptic tweet that suggested the Japanese outfit’s high school visual novel/murder mystery-a-thon was heading to Steam. A Steam page then did appear but a tentative “February” release label kept us guessing as to when we’d get to play it. Now, according to Spike Chunsoft’s Twitter, that date will be February 18.

There’s loads of good games on 2016’s horizon – our favourites are gathered on our list of upcoming PC games.

At the time of writing, Danganronpa: Trigger Happy Havoc’s (try saying that after a few hours down the pub) Steam page still suggests a sometime in February PC launch, however Spike Chunsoft tweeted this earlier today: 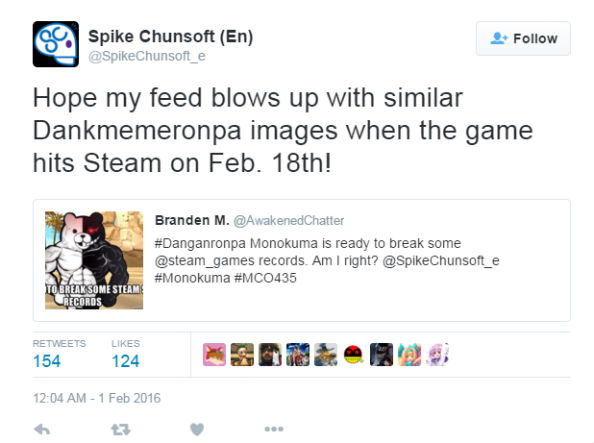 Shortly after the Steam page reveal last month, Siliconera reported Spike Chunsoft had confirmed Danganronpa: Trigger Happy Havoc’s sequel will also come to PC shores, as well as a number of other ports within their publishing repertoire.

Either way, it seems Danganronpa: Trigger Happy Havoc is due for release on February 18. Let’s have another wee look at the announcement trailer that surfaced last month: