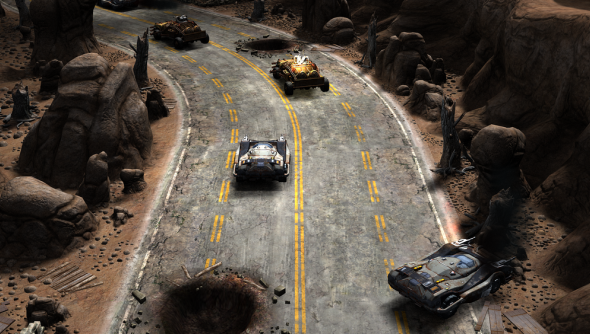 I’ve developed a slightly masochistic want for brutally faithful Warhammer adaptations lately. It’s been well served, with Space Hulk still visible in the rear-view mirror and Blood Bowl 2 glittering like a desert mirage on the horizon.

While Full Control are sadly no longer with us, Auroch are another studio who’ve devoted themselves to digitising Games Workshop’s side projects. Fresh from two iterations of Chainsaw Warrior, they’ve dug up and dusted off a 1988 board game set in a 2023 “too wild to be true and too close for comfort”.

Be warned: vehicles were harmed in the making of its trailer.

Blood Red States is the result of an unlikely partnership between Games Workshop, the University of East Anglia and The Wellcome Trust – the biomedical research charity with a gaming consultant in Auroch design director Tomas Rawlings.

The game takes us to a future America wracked by climate change, pollution, and disease. The 1% have become the 0.1% – and the space between the mostly lawless East and West Coast cities is known as the Big Empty.

The player runs an agency of Sanctioned Ops – Mad-Max-meets-Judge-Dredd bounty hunters hired by an unspecified state to keep the last roads open. They’ll nurture a team of hardened drivers to drive armoured cars in high-speed conflicts with gangsters – and use their winnings to buy upgrades like heavy machineguns and bionic eyes.

Turn-based battles take place on stretches of track enlivened by on-road hazards and car collisions. The trailer is shrill and charmingly cheesy:

Auroch’s Dark Future should be with us in the Winter; will you be enjoying a bleak, bone-dry Christmas?