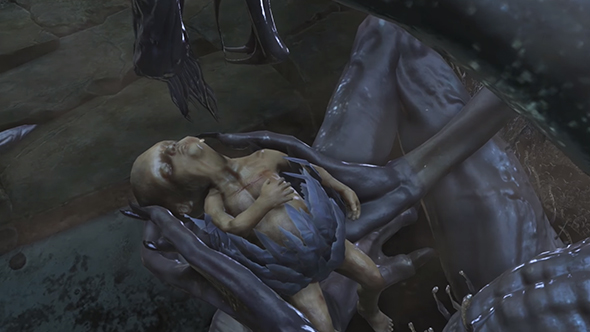 Optional Dark Souls 3 boss Oceiros – more properly Oceiros, the Consumed King – probably made quite an impression if you found him, what with his constant cradling of an invisible baby. It turns out, that baby wasn’t always invisible, and the original version of the boss fights ends up being rather grisly.

Indie dev and YouTuber Lance McDonald has shifted work on his Bloodborne cut content videos to Dark Souls 3, and the first video on the latest in the Souls series focuses on the disappearance of baby Ocelotte. An alpha version of the game showed the child as a visible object in Oceiros’s hands, in contrast to the final game where the draconic boss appears to be holding someone who isn’t there.

The second phase of the fight has Oceiros slam his cradling hand into the ground and yeah, that still happens here. Ocelotte’s a little worse for wear, of course.

It’s a fascinating look at the original idea for the boss, and one I’m sure will help to fuel more than a couple lore debates in the years to come. McDonald’s already working to dive deeper into Dark Souls 3’s cut content, and there should be plenty more on the way.