Hoo boy. Time to delve into Dark Souls 3’s inner workings – will you let me pretend I’m actually really, really good at Dark Souls for the duration of this article, rather than broadly inept and still frequently bested by groups of more than two skeletons? Thanks.

With From Software president Hidetaka Miyazaki back at the helm for number three, there’s some speculation about which features from previous Souls titles, and PS4 exclusive Bloodborne, will find their way into the new game. To allay fans’ worries and give a clearer picture of From’s intent, Miyazaki recently outlined the features that will make the cut, and those that won’t.

Firstly, fast-travel works exactly like it did in Dark Souls II, available from the very beginning of the game to ease your convenience.

You’ll be able to re-spec your character, too, though Miyazaki has yet to determine whether the Soul Vessel will return as the item which facilitates respecialisation. “I’m not sure if the same sort of item will be implemented, but there will be a method for players to re-assign souls,” he says.

New Game + will take a leaf from Dark Souls II’s book, too. Enemy locations and placements will be mixed up for a fresh challenge, and new weapons and items added. Bonfire ascetics, which increased the strength of nearby enemies in previous games, won’t be returning, so you won’t be able to artificially “+” an area yourself. 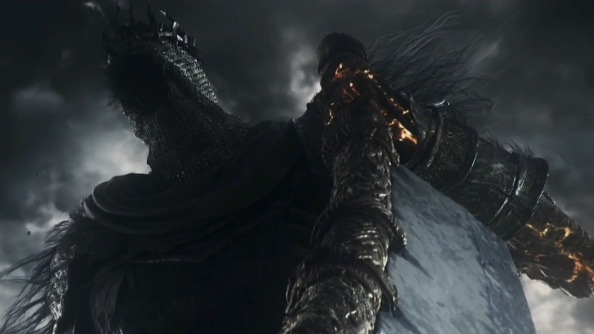 Miyazaki aims to strike a balance between Dark Souls’ highly durable weapons and Dark Souls II’s toothpicks for number three. Here’s what he says to say on the matter: “I personally think that the weapons in Dark Souls II break a little too easily. This was implemented intending for the players to try out many types of weapons, but even so, I felt they broke too quickly. However, in Dark Souls I, they didn’t break enough, and so I’m hoping to find a good balance for Dark Souls III.”

Summoning and invasion won’t work like Bloodborne and its bell summons, but rather the same system as Dark Souls I and II. You’ll be matched using Soul Level rather than Soul Memory (total number of souls collected, Dark Souls II’s summoning metric).

Hidden walls make a return, too, though Miyazaki doesn’t want you spamming the action button endlessly to find them. “This is due to my thinking behind this type of feature,” he says. “I like to have coincidences happen during battles, or accidental reveals due to swinging weapons around, randomly shooting arrows. I want to implement this sort of surprise discovery in a natural way when playing the game.”

Miyazaki’s comments fall in line with our hands-on impressions of Dark Souls 3 – it definitely feels like Dark Souls. There are notable differences, though – it plays slightly faster, and has fewer, but bigger, maps than its predecessors.