Deep in the Darkroot Forest, behind a door unlocked with the crest of a legendary knight, something lives among the trees that’s quite unlike anything else in this mournful, sombre world. Children dash among the trees under the watchful gaze of their parents. There is life here. Not a facsimile, shadow, or twisted mockery of it, but life. Huge, living mushrooms.

Though missing the white spots of the iconic fly agaric, the image of red-capped mushrooms in an enchanted forest immediately conjures western fairy tales – although Dark Souls’ use of Nordic mythology might also put us in mind of the fungi imbibed by viking berserkers before battle, especially since these mushrooms pack a belter of a right hook. Either way, these odd creatures seem to make sense here; a strangely harmonious part of Dark Souls’ world.

A brief mushroom-splainer (fungi-ntroduction?): The role of fungi in a forest’s ecosystem is to break down organic matter and return it to the soil. A forest without mushrooms is a forest without life. One of Dark Souls’ central points of conflict is the Undead Curse, a malady that forces mortal beings to stagnate, severing them from the intended cycle. Are the living mushrooms, then, the few remaining guardians of this natural harmony that the curse has stripped from much of Lordran? They are, at least, a reminder that such a thing can still exist.

This lightness of purpose is paired with a lightness of tone. Animism is everywhere in Dark Souls – even some of the treasure chests are sentient – but the mushrooms alone possess such a whimsical, Ghibli-esque incarnation of it. Their rounded plumpness, their tendency to topple over, in contrast to the piercing branches of the area’s other floric foe, the demonic foliage. 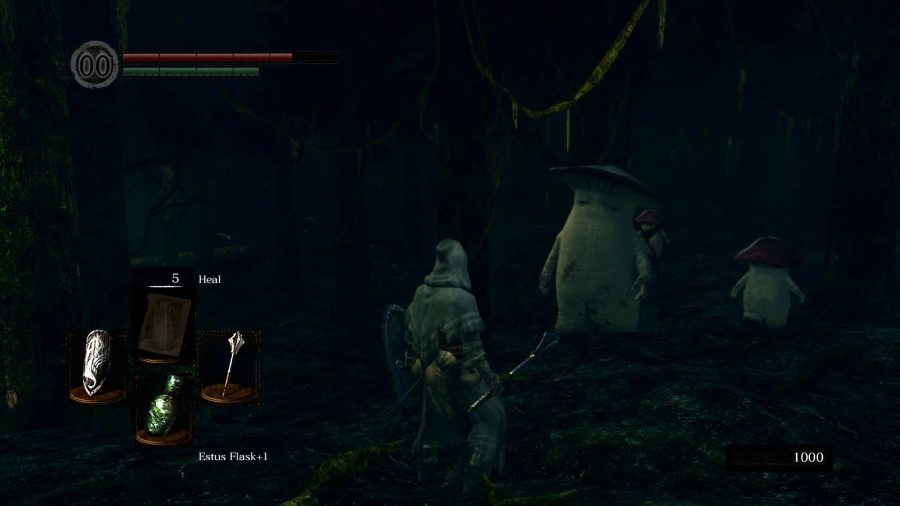 Demonic foliage, in fact, will actively attack the Chosen Undead, lying in ambush and striking from afar. The Mushroom children are one of the few non-hostile creatures in the game, and their parents only attack when you get too close. Their role is guardianship, not aggression.

I think a lot about the difference, in worldbuilding, between tonal inconsistencies and the sort of seeming aberrations that actually end up contributing to verisimilitude. Or, to be more concrete about it, how something like Princess Mononoke’s Kodama are an essential part of a largely dark story, because their adorable oddness provides the contrast that makes us appreciate the abnormality and peril of the world’s current state.

I like to think of the living mushrooms as something akin to Mononoke’s Kodama, a more grounded take on forest spirits, seen through the lens of a western fairy tale tradition with one foot in the mundane. Stalwart survivalists in a forest of vengeful spirits, possessed branches, and feral cats. Messengers for the trees, like punchy, protein-rich Loraxes. 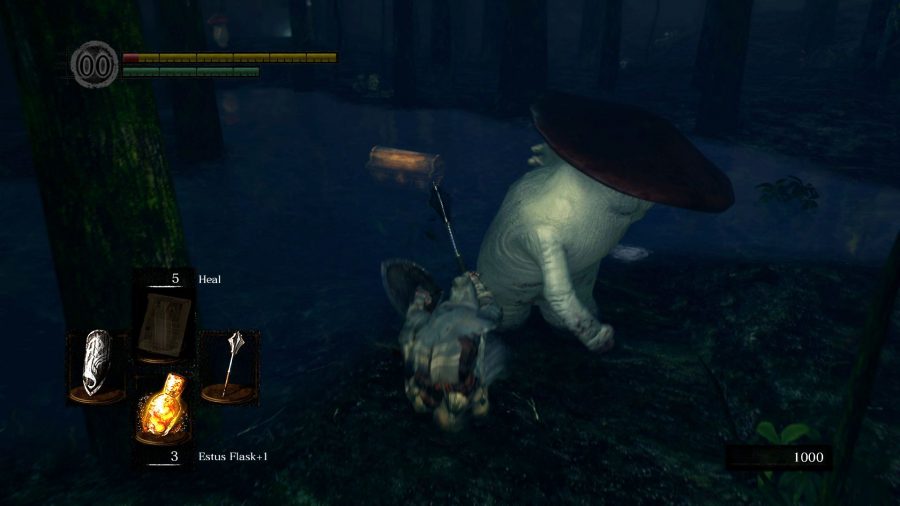 When the Chosen Undead first falls to Firelink Shrine, released by the talons of a huge crow, it’s as a prospective fulfiller of prophecy. That prophecy, we’ll later learn, is a ruse. A tale seeded among the living by a vain lord yearning for kindling strong enough to keep his legacy burning well past its natural span. Similarly, much of the magic we encounter in Lordran is a fabrication. Miracles are the illusions of gods possessed of Olympian pettiness and fallibility. Sorcery is a manmade conceit.

More like this: Here’s everything we know about Elden Ring

But there is enchantment in Lordran, shuffling around the Darkroot Garden or inside the Great Hollow tree. Nurturing their own offspring in hope for the future. Signs of the nature with which the land once bloomed. A tiny spark of fairy-tale whimsy, like the shimmer of a far-off bonfire, beckoning us through the dark.