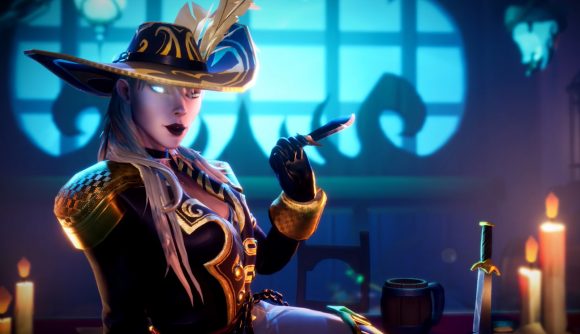 Phoenix Labs has lifted the veil on the next major update for Dauntless, which kicks off next week in Fortune & Glory. The pirate-themed update is actually just the first half of the new Hidden Blades season, which will be the first Dauntless season to be split into two distinct halves – complete with multiple Hunt Passes.

Each Hunt Pass will last roughly the same amount of time as previous seasons, so you’re not getting double-charged for the new content – though this does likely mean it’ll be a bit longer before we see the next big seasonal content drop. Either way, the Fortune & Glory pass kicks off on July 16, and will be succeeded by the Zephyr Strike pass in August.

The biggest addition in the new update will be the Trials of Lady Luck, which will pit you against Behemoths with unusual modifiers for even more challenging combat. The official site posits an example like “Nayzaga with Ragetail Gnasher’s shockwaves and Shrowd’s near-sight vision.”

The Trials will also net you a new currency called Marks that you can spend on unique weapon mods, moves, and special cosmetics.

Check out a quick teaser above.

Take a look at our Dauntless guide if you’re looking for more details on getting started.