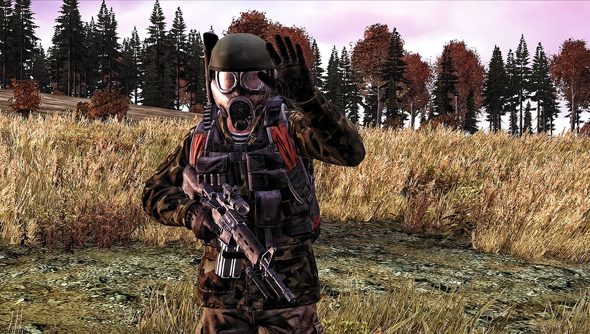 Bohemia know that it wasn’t the bicycles or iffy third-person camera that made DayZ mod so compelling, nor anything captured in the fanmade, single player MiniDayZ. Instead, it was the chance meeting of two players in a context bubbling with uncertainty.

One of their goals over the year’s remaining weeks is to scrape away anything that might obscure that interaction – connection issues, crashes and whathaveyou.

“Be it friendly or hostile, direct or at a distance – the interactions between players within Chernarus is what makes the world come alive without a structured narrative or reason to be,” wrote DayZ lead producer Brian Hicks.

“As we move towards our Christmas break, making those experiences be as fluid and enjoyable as possible on a development build is a personal goal for the team.”

Hicks says that server performance and security fixes rank “just as high” as feature additions on Bohemia’s to-do board for the rest of November and December.

In the last week, they’ve triaged and bugfixed some client/server crashes, and wrestled with the most pertinent character connection problems – namely those that were protecting players from attack while they logged in.

“As we approach the end of 2014 and look back at all the challenges, and accomplishments of the DayZ Early Access I can not help but get excited about the possibilities in the new year,” said Hicks. “A passionate and active community has allowed us to grow and adapt the design and functionality of the project so much more than the traditional development method does.”

There’s only really one question I’d want to ask you lot about standalone DayZ: is it time? How long should those of us not particularly interested in testing wait before booking a one-way boat to Chernarus?It’s not easy to tell how far the addition of edible people to DayZ has shunted the game towards completion.