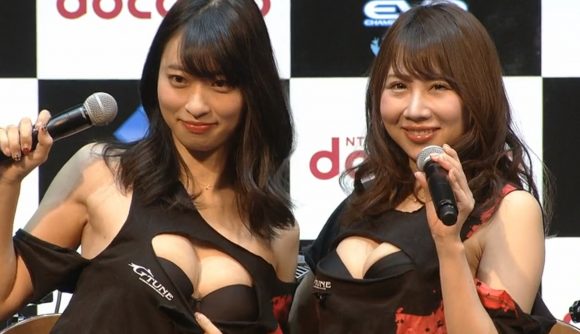 Evo Japan is underway today, which as you might guess is the Japanese version of the world’s biggest fighting game tournament. With so many fighting game fans watching the show, it’s only natural that developers want to showcase their upcoming brawlers on stream. For Dead or Alive 6, that meant a spot with enough sexually suggestive material for the Twitch stream to briefly get shut down.

Early Dead or Alive 6 trailers suggested a less sexualised take on the series, though the game’s been marketed very differently in Japan – including collector’s editions with breast-shaped mouse pads. The DOA6 segment at Evo Japan offered a general showcase of the game’s features, including the title’s free camera movement. In this demonstration, we see the action frozen as wrestler Bass delivers a powerbomb to Nyotengu – at the precise moment in which the action looks most like a sex act.

During the showcase, two women on the host’s stage – each dressed in hot pants and cleavage-baring ripped shirts – posed with PG-rated innuendo, occasionally pulling down their shirts and shaking their breasts. At one point, one of the women gave a couple of quick spanks to her co-host.

You can see a number of those clips via Dexerto, as well as an image of a now-deleted Tweet from Evo boss Joey Cuellar, where he said “The DOA ad that aired on our stream does not reflect the core values of Evo or the FGC. We ended the stream temporarily to protect the integrity of our brand. We sincerely apologize to our fans.”

Host Mark ‘MarkMan’ Julio offered a similar apology on stream, which is archived on Twitch.

The fighting game community is already poking fun at the ‘core values’ phrase, especially as we come upon the release of another hyper-violent Mortal Kombat release.