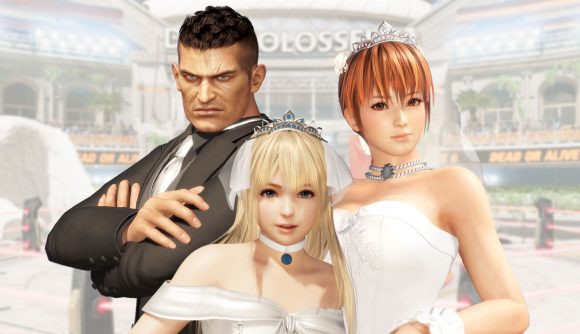 The fact that Dead or Alive 6’s DLC will be both prolific and expensive probably won’t be surprising if you played the previous game, but it’ll likely still be disappointing – especially given the quality noted in our Dead or Alive 6 review. Season Pass 1 is now available for sale for $92.99 / £73.99 / €89.99. It’ll bring you all the new content to be released between March and June of this year.

Specifically, that new content will include two new characters – Mai Shiranui and an as-yet-unnamed follow-up – as well as 64 costumes. Costumes like the NiCO technomancer gear and the Nytotengu wrestling outfit serve as bonus content alongside the larger packs of new gear.

There’ll be six packs of costumes in the pass, including two character-specific packages for Mai and the other new addition. The remainder will be made up of four 13-costume packs. Those will be split into two ‘Happy Wedding’ costume packs and two general costume packs, so presumably each theme will feature an outfit for each of the game’s 26 characters.

Expensive costume packs are nothing new for fighting games – Street Fighter V’s DLC currently totals out to around $350 – but since the fifth entry, Dead or Alive’s DLC has been especially over the top. The current total for every DOA5 item on Steam is close to $1,300.

You could certainly spend more than that to get the full range of cosmetic options in a free-to-play game (which, by virtue of a secondary release, DOA5 eventually became), though those games typically don’t have a ‘buy everything’ pass to tickle the mentalities of DLC collectors.

Neither of the costume themes here seem to be especially lascivious, though it’s worth noting that the last game’s DLC became increasingly focused on sexy outfits at the years wore on – everything from Valentine-themed lingerie sets to crossovers with the similarly suggestive Senran Kagura series. Some of those sets brought the male characters in too, but the focus certainly shifted toward the women in the cast.

So if you were hoping for a shift in Dead or Alive – whether for it to be ‘less sexualised’ as the early promotion suggested or simply less expensive – it looks like the sixth entry in the series is sticking with convention. Look forward to the inevitable announcement of Season Pass 2 later this year.